It is unclear whether the three currents can unite on unified Sunni interests. 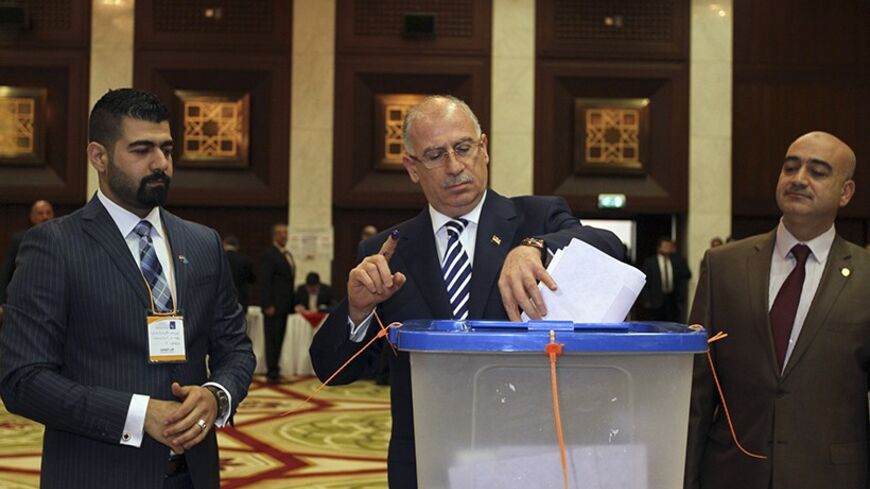 Osama al-Nujaifi (C), speaker of the Iraqi Council of Representatives, holds up his ink-stained finger as he casts his vote at a polling station during a parliamentary election in Baghdad, April 30, 2014. - REUTERS/Mahmoud Raouf Mahmoud

The political map of the Sunni forces after the April parliamentary elections seems, at first glance, like an extension of the map before the election, in terms of the weight and influence of the forces. However, what has changed is that the Sunni political forces will be in a more awkward position than ever to describe what alliances they will make to form a government and how they will deal with the promises made before the election.

The election results have not yet been officially announced, and the media generally seem more focused on the Shiite political map than that of other segments. But the information available so far confirms that the Mutahidoun list, led by current parliament Speaker Osama al-Nujaifi, is running ahead of other Sunni forces. Leaks to Al-Monitor suggest that Mutahidoun will have 33 to 35 seats in the next parliament, mostly centered in Mosul, Baghdad, Anbar and Diyala.

Although the Al-Wataniya list, led by the liberal Shiite Ayad Allawi, did not present itself as a representative of the Sunnis in Iraq, the leaks suggest that it will win 20 to 25 seats concentrated in Baghdad, Babil, Salahuddin, Anbar and Kirkuk, and that most of its seats will go to Sunni candidates within the list.

In third place comes the list of Deputy Prime Minister Saleh al-Mutlaq with 8 to 10 seats concentrated in Baghdad and Salahuddin. According to the leaks, local lists have won a number of Sunni seats, which are expected to join various parliamentary alliances.

The first challenge facing the Sunni political forces is almost similar to the challenges facing the Shiite and Kurdish forces, and is centered around the possibility of establishing a grand coalition among the winning Sunni forces before the negotiations to form a government.

Yet, responding to such a challenge is very complicated. On the one hand, the three main Sunni currents are not in agreement. They disagree on many aspects, especially about who would lead such a coalition.

It can be recalled that the departure of the Sunnis from the Iraqiyya list, which was led by Allawi and which won 91 parliamentary seats in the 2010 elections, and the Sunnis entering the current elections on other lists that have a clear “Sunni” discourse has caused a leadership struggle for the Sunnis. Nujaifi will not accept a secondary representative role under Allawi, nor would Allawi agree to a coalition led by Nujaifi, and the distance between Mutlaq and the others is bigger than ever.

The problem is not only about forming a Sunni coalition. In the end, the matter can be resolved between the above forces. Informed sources told Al-Monitor that there are proposals to resolve the leadership crisis by forming a shared leadership committee where the decision weight would be proportional to the number of seats of each bloc. This is the same mechanism applied in the “National Alliance,” which includes the Shiite forces, and “the Kurdistan Alliance,” which includes the Kurdish forces.

The biggest challenge, according to these sources, is to achieve a policy consensus in light of seemingly fateful intersections about the position regarding forming a “Sunni province,” or at least “the province of Mosul” between the current of the Nujaifi brothers (Osama and Atheel al-Nujaifi) on the one hand, and Allawi and Mutlaq on the other.

But the crisis is even bigger than that. According to leaks from within Nujaifi’s Mutahidoun bloc to Al-Monitor, there are concerns within the bloc about Nujaifi’s uncompromising rhetoric before the election about “the impossibility of allying with a government headed by Maliki” and the possibility that this rhetoric may be used to justify excluding the Sunnis from the next government if the Shiites agree on making Maliki their sole candidate for prime minister.

It is certain that there are Sunni-Sunni talks about how to produce a unified Sunni vision on issues of contention with Baghdad and on how to reach a common consensus on the formation of a “Sunni alliance,” its administration, its leadership, its role in distributing power, its understandings, alliances and priorities, and especially its position on the Anbar war and the complaints of Sunni areas generally. However, it is not certain that such an alliance could come to light, given the inconsistent orientations and interests of the various parties.