Ayad Allawi expressed pessimism toward the upcoming Iraqi elections and called on Iran to contribute to ensuring security in Iraq. 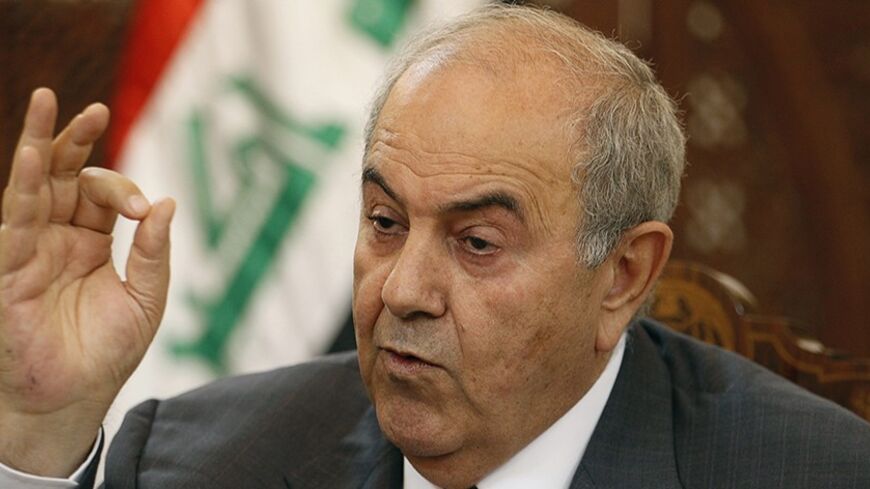 Ayad Allawi, whose Iraq National Movement (“Iraqiyya”) won the most votes in the 2010 Iraqi parliamentary elections, won’t be able to repeat that victory this time.

Yet he is still a presence in the 2014 elections, and is one of the few Iraqi politicians capable of freely moving across the sectarian barriers and animosity which characterizes most Iraqi politicians, winning a large bloc of Sunni votes in 2010.

Allawi is focusing on the Shiite arena again after he abandoned the Iraqiya List’s greater Sunni clout following some splits within his coalition: The Mutahidoun bloc, led by parliament Speaker Osama al-Nujaifi, the al-Arabiya bloc, led by Deputy Prime Minister Saleh al-Mutlaq, the al-Iraqiya al-Bayda, al-Iraqiya al-Horra and the Hall (solution) list are no longer part of his coalition.

Allawi told Al-Monitor that he was not optimistic about the current elections, and that "39 female and male candidates from the Al-Wataniya coalition have been illegally and unjustifiably excluded from their positions in ministries or provincial councils.”

“These attacks have reached the levels of murdering and blowing up the houses of some of our candidates in Anbar [the house of candidate No. 2 Jassim al-Halbusi] and the house and guesthouse of Sheikh Wissam al-Bayati [candidate No. 6 in Salahuddin] despite the presence of special forces near the bombing sites,” Allawi said.

"There is security escalation and unprecedented implications,” he said. “I already mentioned a few months ago in the media that the elections would be bloody and that is what is happening now. There are extensive military operations in important provinces, which will hinder the process of fair elections in these provinces. Also, there is a wide displacement movement from provinces to numerous regions in Iraq in search of safety, and this will deprive thousands of people of the opportunity to vote.”

Allawi expressed further doubt about the elections: “Thousands of electoral e-cards [according to statements by the Independent High Electoral Commission] have been stolen, and 25,000 sent to [the addresses of] dead people in Baghdad. In addition, the cards’ barcode shows who votes for whom, which poses a threat, especially among the armed forces and the internal security forces.”

Allawi derives his strength from two main spheres — his broad presence in Baghdad and his deep alliances with tribal leaders in the south, north and west of Baghdad, which provide him with semi-fixed seats.

Allawi’s popular base in Baghdad was intensely shaken following 2010, after other liberal forces joined the game. This situation attracted voters to the capital, which is home to mixed sectarian and ethnic groups and where the largest number of voters seek to achieve security and prevent civil war — issues that may be preventing Allawi from providing a pivotal role for his voters.

Prime Minister Nouri al-Maliki's large presence in Baghdad has become the biggest challenge to Allawi, as Maliki has succeeded in promoting the State of Law Coalition as a defender of civil peace and security in the capital.

The premiership occupied by Maliki in 2006 has had a crucial role in expanding his popularity in Baghdad. Allawi aspired to take back the position in the 2010 elections, and is perhaps still seeking to regain it, if meetings he held with the Iranian ambassador in Baghdad are any indication. Allawi was reported to have backed down from his hostile proposals toward Iran; Allawi asserts that these proposals prevented him from getting the post of prime minister, which he held on an interim basis in 2004-2005.

Allawi said that he met the Iranian ambassador during a dinner reception in the presence of a group of representatives, “and it was a great opportunity to ask him that the Iranians place pressure on their friends and allies in Iraq to achieve some kind of stability that would lead to the expansion of the Iraqis’ participation in the elections.”

“I asked him in front of the guests that they work on calming the situation in Anbar, Diyala and the Baghdad beltway. This is what happened, and we believe that Iran can be supportive of Iraq’s stability by not being biased and by abstaining from interfering in Iraq's sovereign affairs, as it did in the 2010 elections. We expressed hope to have all the neighboring countries contribute to the stability of Iraq, and not the opposite, as we have no enmity with any of them, including Iran. We have also expressed hope of opening a new page based on the exchange and balance of interests, as well as on the respect of sovereignty and noninterference in internal affairs,” Allawi said.

The current balance of power in Iraq does not really suggest Allawi as a potential candidate for the post of prime minister. However, his role in Iraqi political life, which is not only linked to his domestic clout, but also to the weight of complex foreign relations, will be felt during the next phase.