Ayad Allawi’s bloc, al-Iraqiya, issued a terse statement criticizing the Iraqi government and calling for a review of its own relationships with other Iraqi political parties, writes Ali Abel Sadah. 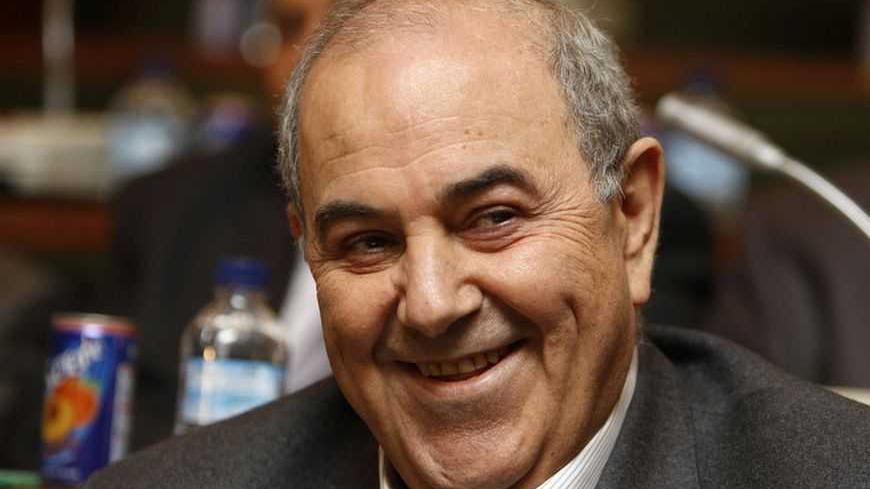 The Iraqiya List coalition, which is led by secular former Iraqi Prime Minister Ayad Allawi, is trying to regroup its scattered strength. It recently announced that it will review its relationship with other political forces.

Iraqiya’s members met in the presence of Allawi and Al-Monitor obtained a copy of the statement they issued after the meeting. The statement said that during the meeting, Allawi spoke about the repercussions of the protests in Anbar, Tikrit and Mosul. Allawi discussed with the members of the bloc the position of Iraqi Prime Minister Nouri al-Maliki’s government on the protests.

This is one of the few times that Allawi has met with his bloc since the 2010 elections crisis, when he failed to be elected prime minister. Since then, he has become less active, moving between Baghdad and London. The bloc’s internal matters were left to some of its Sunni members, among them Vice President Saleh al-Mutlaq and Parliament Speaker Osama al-Najaifi, who is considered the de facto leader of the Iraqiya bloc.

Washington helped Iyad Allawi become the first interim Iraqi prime minister after Saddam Hussein. He began his political career in the Baath party before breaking off his relationship with it. He earned a reputation as a strong leader in the face of the Sunni and Shiite rebellions in 2004.

But with the approach of the Iraqi provincial council elections, Allawi began showing his presence in Iraqiya List bloc. In its last meeting on Feb. 25, some called for a review of the bloc’s relationship with other political forces.

In past years, Iraqiya was busy feuding with the rival State of Law coalition, the ruling Shiite alliance led by Maliki.

Iraqiya suffered several internal divisions, among them the breakaway of the members of the “White Iraqiya,” which is led by one of the most prominent Iraqiya hawks, Sheik Jamal al-Battikh. He used to be Allawi’s man in the Middle Euphrates, a Shiite-majority area in south Baghdad.

The terse statement did not contain a new position, but it alluded that the bloc’s policies toward its political opponents may change. The statement has reservations about both the Iraqi government and those protesting against it. The statement commented on Iraqi events and called for “examining the political movements in the country and reviewing the relationships between them.”

Allawi’s actions have to do with the approaching local elections. He is trying to give momentum to his party, the National Accord Movement. But he is facing serious difficulties because his party has no alliances with major parties, such as the parties of Mutlaq and Najaifi, who have chosen to stay away.

The Sunni Arabs used to consider Allawi a “traitor” for ordering the attack on Fallujah in Nov. 2004, but in some areas more than 80% of Sunnis voted for him in 2010.

Allawi also fought fierce battles against the Mahdi Army in Najaf in the summer of 2004. Lately, he has denounced the “security crackdowns and arbitrary arrests” of his supporters.

When he became prime minister in 2004, he sought to build up the armed forces and also criticized the exclusion of Baathists (as long as they were not among Saddam Hussein’s supporters) from political life and administration.