Iraqiyya Bloc Seeks to Gain From Sunni Unrest in Iraq 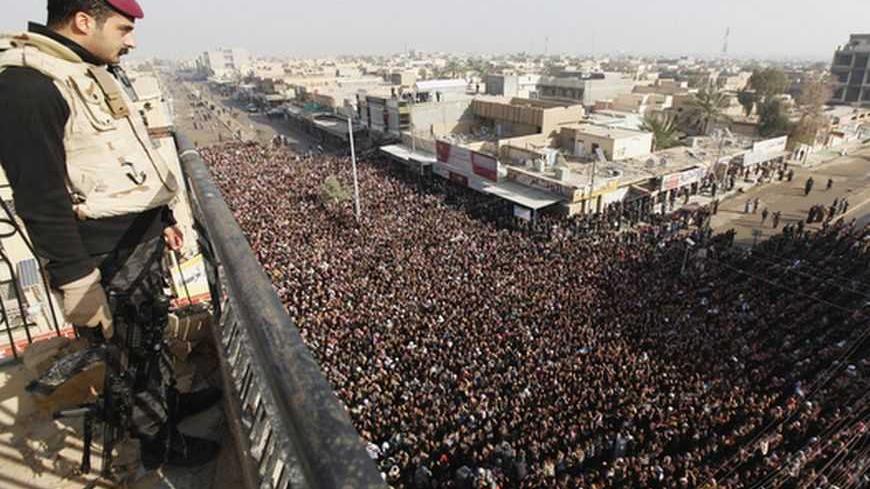 An Iraqi policeman watches as he stands guard during the funeral of victim killed in clashes with security forces in Falluja, 50 km (30 miles) west of Baghdad, Jan. 26, 2013. - REUTERS/Thaier Al-Sudani
Ali Abel Sadah
January 25, 2013

On the eve of the local elections, the Iraqiyya bloc — led by former prime minister Ayad Allawi — seeks to make political gains from the Sunni protests in Iraq.

This time, it opted to exert pressure on the Maliki government by disrupting cabinet meetings. The Iraqiyya bloc recently announced that “it has frozen its participation in the government’s weekly meetings until the Sunni demonstrators’ demands are met.”

The Iraqiyya bloc took charge of eight ministries in formation of the government, namely the Ministries of Finance, Electricity, Industries and Minerals, Science and Technology, Agriculture, Education, Communication and the Ministry of State for Provincial Affairs, in addition to the post of deputy prime minister for Services Affairs.

Nevertheless, this maneuver is not new. It was previously used by the Iraqiyya bloc during its crises with Prime Minister Nouri al-Maliki. In 2011, they boycotted cabinet meetings in protest of Allawi not being appointed head of a consultative council with specific powers in legislation and oversight. Allawi’s ministers returned to government meetings, although Maliki didn't meet their demands.

After Sunni protests broke out against the government in Iraq, a number of Iraqiyya leaders joined protesters in the squares across the cities of Ramadi, Mosul and Samarra in an attempt to establish an active presence. However, they were often rejected by clergy working to actively mobilize angry Sunnis.

In the early hours of Jan. 22, 2012, the Iraqiyya-bloc ministers met at the office of Saleh al-Mutlaq, deputy prime minister and Sunni leader of the Iraqiyya bloc. They announced that they had agreed to boycott cabinet meetings. Mutlaq’s office told Al-Monitor that the decision “is a political stance rejecting the policy of exclusion, marginalization and negligence of public demands.”

Mutlaq’s office said that the ministers participating in the boycott “will continue to perform their daily tasks in public bureaus within the ministries," and that "the boycott of government meetings will not end unless demonstrators’ demands are met.”

Sunni leaders will probably exploit the decision to boycott, in order to intensify pressure on Maliki. In a press conference attended by Al-Monitor, Hamed al-Mutlaq said that the bloc calls on the “Shiite” national coalition to choose an alternative government.

Hamed al-Mutlaq believes that Shiite parties have “procrastinated in meeting the demands," which he described as “legitimate.” This stance goes in line with that of Shiite cleric Muqtada al-Sadr’s supporters. In fact, the politician Bahaa al-Araji said that “failing to meet demonstrators’ demands would escalate the crisis.”

However, Maliki’s State of Law Coalition is turning a blind eye to the Iraqiyya pressure, and attributed to its political tactics an external motive.

Hassan Sinead, a politician close to Maliki, said that “countries around the region stand behind demonstrations that are taking place in some provinces, and the Iraqis know that well.”

Sinead believes that “the Iraqiyya bloc is not managing the protests because it is not in a position to do so.” He asserts that Maliki will not pass any law freeing terrorists to kill Iraqis once again, regardless of the pressures placed on him, in reference to the amnesty law.

In contrast, Maliki is hastily trying to make additional concessions — in light of active pressure from the religious authorities in Najaf — in hopes of cooling Sunni anger and preventing the Allawi bloc from using the protests as leverage in local elections.

For this reason, Hussein al-Shahristani, deputy prime minister for energy and oil, announced that “28,590 cases of Baathists accused under the accountability and justice law were referred to the department of retirement.”

However, in a press conference attended by Al-Monitor, Justice Minister Hasan al-Shammari said, “Those who will be released from Iraqi prisons will be subject to future arrest if they commit any criminal act or any new confessions come out against them.”

In this complex political atmosphere, the Iraqiyya bloc is trying to overcome problems related to politics and the noticeable absence of its leader, Allawi. It believes that pressuring Maliki at this critical political moment provides a good chance to win new leverage on the eve of provincial elections.