Iraqi Prime Minister Nouri al-Maliki is facing threats to his rule from both Kurdish and Sunni quarters, which seek to undermine confidence in his ability to govern, writes Ali Abel Sadah. 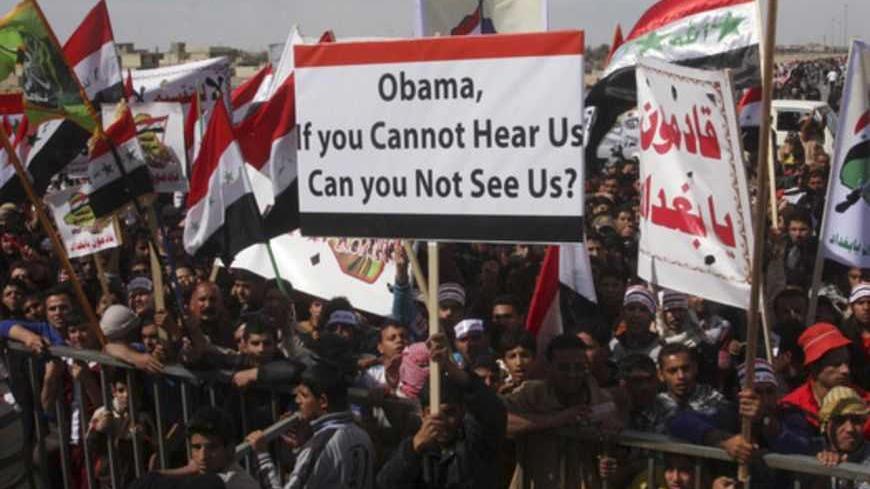 Will the Sunni and Kurdish opponents of Prime Minister Nouri al-Maliki seek again to vote him out of office? They already attempted to take this step in 2012 but backtracked at the last minute. Today, however, they find themselves in a dire political situation, as violence is likely to break out across the entire country.

This comes amid signs suggesting that Sunni and Kurdish MPs are likely to withdraw from the Maliki government. In fact, the Iraqiya MPs failed to attend the weekly cabinet meeting on March 12, 2013, with the exception of the Ministry of Electricity, whose alliance bloc known as “Li Haal” [For a Solution] has a good relationship with Maliki. The Li Haal block constitutes a Sunni component in the Iraqiya list led by Jamal Karbouli.

Issawi, who has been active in leading Sunni protests against Maliki, was on his way from the city of Rutbah, near the Syrian border in the west of Anbar, heading to the city center when he was intercepted by a military helicopter. However, he managed to escape with the help of some people from the province.

Since March 2013, the Iraqi security services have had an arrest warrant against Issawi on charges of leading armed groups to carry out an assassination operation, according to a senior judicial source who spoke to Al-Monitor.

Issawi, however, denies these charges, claiming that he has been politically targeted by Maliki, who ordered the arrest and that should he continue with these actions he will lead the country to destruction and division.

The Iraqiya List, with which Issawi is affiliated, said in a written statement, of which Al-Monitor managed to obtain a copy, that “the group strongly condemns the attempt of an unknown military force to kidnap or assassinate Issawi, who is a leader in the Iraqiya list in [the] west of Anbar,” demanding the “government to clarify its position toward this serious terrorist and criminal act.”

The collation has also called upon “all political blocs, most importantly the State of Law Coalition (the Shiite ruling political group led by Maliki), to claim responsibility and put an end to the reckless policies and the disregard of the common fate."

The Iraqiya List has gone as far as to demand the “formation of a new government through new negotiations.”

In a telephone interview with Al-Monitor, Hamid al-Mutlaq, a leader affiliated with the Iraqiya List said that “the current government has fomented sectarian discord, which led to deteriorating security situation and rampant administrative corruption.” He added that “two months have passed since the outbreak of popular protests, yet the government has failed to meet their demands. We are only left with one choice, which is to hold dialogue in order to form a new government.”

In addition to Iraqiya List MPs, Kurdish MPs have also boycotted the Iraqi government meeting, but for another reason. The Kurdistan Alliance, which is the political group representing Kurds in the Iraqi Parliament, said that Kurdish MPs did not attend the meeting as they were busy in a meeting with Masoud Barzani, the president of the Kurdistan Region, regarding the implications of the financial budget law of 2013.

A leader of the Patriotic Union of Kurdistan (PUK), however, told Al-Monitor that Kurds have not yet decided to withdraw from the government. He said that they are monitoring the situation, noting that all possibilities are open. He added that the problem with the Baghdad-based government is not a problem with Kurds, but the problem of “a regime that has been ruling for 10 years.”

In light of these new developments, Sunnis and Kurds are likely to reignite their demands to withdraw confidence from Maliki. Nevertheless, such a move also depends on the position of the Shiite movement led by the cleric Muqtada al-Sadr.

During the summer of 2012, Sadr led a campaign to undermine confidence in the Maliki government. Thus, he forged good relations and understanding with Iyad Allawi, head of the Iraqiya List, and Massoud Barzani. The Shiite cleric, however, backtracked at the last minute under the pretext that he was waiting for Sunnis and Kurds to provide the necessary number of MPs to vote Maliki out of the office.

The Shiite Nation Iraqi Alliance (NIA), on the other hand, believes that Maliki’s actions are likely to increase tensions and the chances of a civil war. Therefore, the NIA held an urgent meeting headed by the alliance’s leader and former prime minister, Ibrahim al-Jaafari, along with Ammar al-Hakim, leader of the Supreme Islamic Council, and Prime Minister Nouri al-Maliki.

Al-Monitor was present during a press conference that included the three leaders, where Jaafari said that the urgent meeting served to pressure the government to enforce the constitution and maintain the security situation of the country.

“We also have to protect our strategic alliances with the Kurdish political forces, and the existing political forces of the Iraqiya List,” he said in an indication that the NIA is not satisfied with Maliki’s actions, especially regarding his relations with Sunni and Kurdish MPs.

Jaafari added that “some mechanisms will be activated in the Committee of Five regarding the NIA, the Kurdish and Sunni forces. The ministerial committee on the other hand will address other overdue issues.”

It should be noted that the Committee of Five was formed by the government to study the demands of the Sunni demonstrators in Ramadi, Mosul and Tikrit. Protesters, however, do not have confidence in it.

The Sadrist movement, on the other hand, has only condemned the policy of Maliki, without referring to any withdrawal of its MPs from the government.

Zamili, who is a leader affiliated with the Sadrist movement, said that he “condemns the attempted the arrest of outgoing Finance Minister Rafie al-Issawi,” stressing that the “country does need further escalation of the situation.”

He added that “if there is evidence proving that Issawi has been involved in any crime, then the necessary legal measures shall be taken against him. However, since no arrest warrant has been issued against Issawi, no party has the right to do so, especially since we are going through difficult circumstances due to the ongoing demonstrations and withdrawal of the Iraqiya and PUK MPs from the government.”

It is obvious that Maliki is in a critical position, but how will his opponents act? History is not on their side, so will they pressure the government in a new way, such as withdrawing from it and leaving Maliki without any partners?