No Surprises in Early Results For Iraqi Provincial Elections

The results of the latest round of provincial elections in Iraq have failed to defy expectations, with the same political problems persisting, writes Mushreq Abbas. 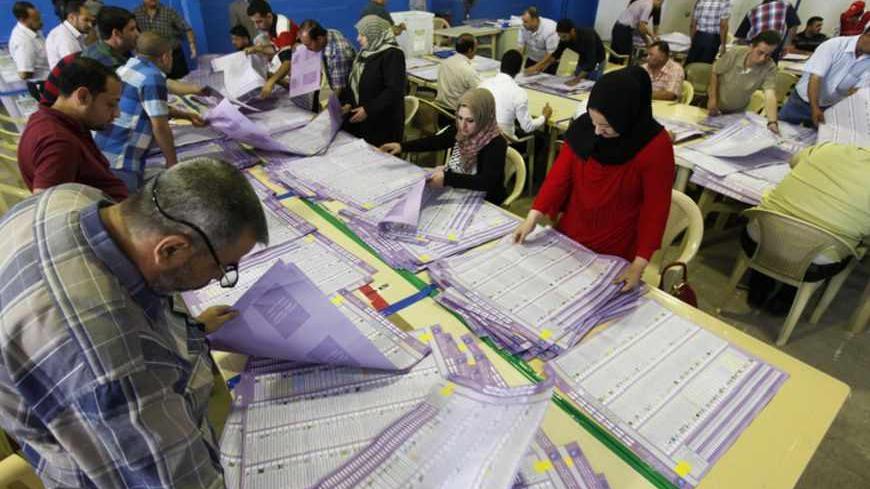 The results of the local elections in Iraq, which took place on April 20, did not come as a surprise. Their initial results were within the range of expectations, even if they put forth new facts on the ground and revealed facts that will govern the relationship between the Iraqi parties in the months leading up to the general election in early 2014.

According to the preliminary results of the elections, the State of Law coalition, which is led by Prime Minister Nouri al-Maliki and which includes various parties that won in nine Shiite cities in southern Iraq, as well as in Baghdad, while the Mutahidoun bloc, led by parliament Speaker Osama al-Nujaifi, won in the two Sunni cities of Diyala and Salahuddin. These cities were allowed to vote after the ballot was postponed in Nineveh and Mosul, in addition to Kirkuk.

The figures of the results show that the coalition of the young cleric Ammar al-Hakim has scored a big win in six Shiite cities, knowing that he achieved low rates in the 2009 elections. These numbers also show that cleric Muqtada al-Sadr's bloc remained at the same level and that the coalition of the secular politician Iyad Allawi and that of the Sunni politician who split from the Iraqiya List, Saleh al-Mutlaq, witnessed a decline.

But the success of Maliki’s bloc cannot be deemed as a political victory for him anyway, compared to the level of expectation that was set for the local elections, and the political project upon which he ran for the elections. This program provides for the achievement of a “major victory” in all Iraqi cities, so that he can rid the political game of those who, according to him, “obstruct his government work.” He certainly means the so-called Erbil-Najaf alliance, which includes Sunnis, Kurds, the Sadr movement and, to a further extent, the movement of Ammar al-Hakim.

Although he won the elections, Maliki is roughly 20 seats down from the number held by his coalition in the previous elections. Moreover, the results indicate that his Sunni ally, Saleh al-Mutlaq, who bet on his ability to bring down the hawks of the Iraqiya List, like Nujaifi, Ayad Allawi and Rafi al-Issawi (the former minister of finance) in the elections, will not be able to achieve any breakthrough in the Sunni arena in favor of Maliki, who speaks about a strong central state that fights against those who advocate a federal Iraq.

The other political map crafted by the election results, especially in the Shiite cities, is that the seats of the local governments were distributed not only among the major forces (Maliki, Hakim and Sadr), but also among independent movements, forces and figures. These were not found on the previous map and have managed to gain a considerable number of seats, each gaining a seat or two.

This last observation will impose new considerations on the main Shiite forces, as they might — for the first time in ten years — face alliances between unknown forces for the formation of local governments.

In a major city — in terms of data and results — such as Basra, Maliki's coalition will not be able to form a local government without resorting to a possibly great set of allies. Those allies, however, may succeed in forming an alliance that topples the Maliki coalition’s control over the city's government and that has been ongoing for four years.

Basra does not only derive its importance from the fact that it is a pivotal economic and oil hub in Iraq. In fact, the city's inclination to shift towards a federal province makes it one of the cities that constitute a source of concern for the government in Baghdad and for the forces defending the central system in government.

Thus, the local government in Baghdad, which is constitutionally not allowed to turn into a territory, will not have a significant impact on the future strategies of the forces, even if the results according to which Maliki won visualize the potential of the forces in the general election.

As for the two cities of Diyala and Salahaddin, their results put forth clearer indicators about the Sunni popular mood in general, which strongly opposes the policies of the Maliki government on the one hand, and openly or implicitly threatens to revive the "Sunni province" project. Those trends have been translated by the rise of the Mutahidoun list at the expense of other forces.