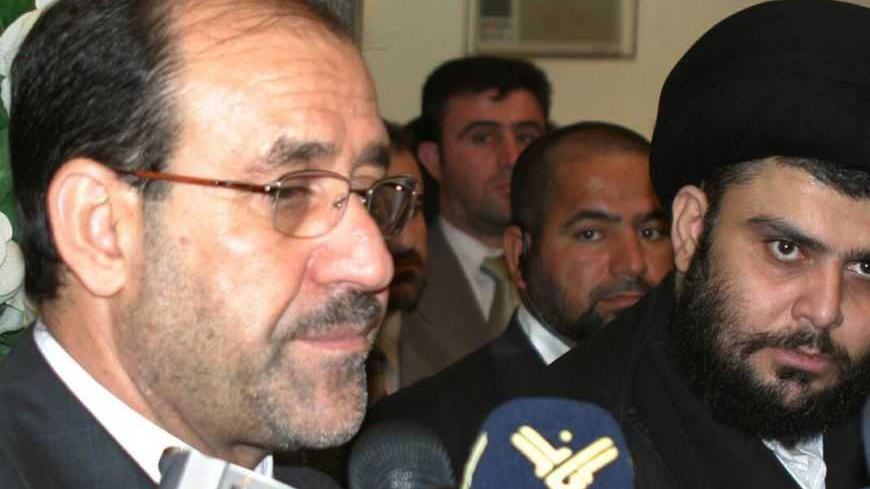 At long last, the political rivalry between the Dawa Party — led by Prime Minister Nouri al-Maliki — and the Shiite leader Muqtada al-Sadr has been renewed. This comes against the backdrop of the prime minister rejecting a proposal made by Sadr’s followers in parliament which called for the insertion of a clause into the 2013 budget that would distribute a portion of the surplus from oil revenues as cash dividends to Iraqi citizens.

Baha al-Araji, head of the Sadr-affiliated Ahrar Bloc in parliament, was visibly upset at a news conference in early December 2012, due to the lawsuit Maliki won against the oil surplus dividends clause. That day he said, "Maliki is responsible for starving the Iraqis." He also expressed his support for the proposal of his leader, Muqtada al-Sadr, which included providing $233 to every citizen and around 40,000 jobs for unemployed youth. Immediately following the decision, Sadr’s supporters took to the streets protesting against Maliki in the capital city of Baghdad, as well as in Najaf — Sadr's stronghold — and cities in the central and southern Euphrates regions. The Sadrists chanted angrily condemning Maliki, saying that he is attacking their leader. Those scenes churned up old memories of the long quarrel that had formerly persisted between the two sides.

There are marked differences between the Dawa Party and the Sadrist Movement. The majority of Sadr’s followers have considered Maliki an enemy ever since he led the 2008 Charge of the Knights, which was the harshest security crackdown the country had seen against the Mahdi Army — Sadr’s armed wing — and killed hundreds of his followers and imprisoned many more. Ever since the clampdown, which took a heavy toll on the city of Basra, the relationship between the two sides has taken on a vengeful dimension.

The fierce competition for leadership of the Shiites brings an additional dimension to their rivalry. For whereas the Dawa Party has successfully remained in power and presents an institutionalized model of leadership, the Sadrist Movement continues to increase in influence due to the widespread support it enjoys among the poor, unemployed youth whose zealous opposition to Maliki grows increasingly radical.

The political rivalry between Maliki and Sadr over who controls the street overlaps with their historic dispute over one another’s claim to authority. Sadr disputes the Dawa Party’s claim that his grandfather, cleric Mohammed Baqir al-Sadr (1934-1980), founded the Dawa Party. In early 2012, Muqtada al-Sadr answered a question from one of his followers regarding the topic, and issued a fatwa to his offices in Iraq which stated that, "His father, Mohammed Sadiq al-Sadr, known as the second martyr, told him that his grandfather was not a founder of the party, and that this is a claim the Dawa Party is making.”

The Sadrist public is preoccupied with the religious details concerning Shiite leadership and authority; meanwhile the political elite of the Sadrist Movement are still considering making a swing at Maliki.

The movement has demands it describes as final and necessary if the dispute with Maliki is to be resolved. It makes note of the dozens of Sadr’s followers in government prisons, in addition to ambitious demands to gain access to sensitive positions in the security apparatus. Sadr still carries the bad memories of 2008 with him and strives to rein in Maliki, sooner or later.

Sadr has also been subjected to significant political shake-ups, which are almost to be expected given his broad base of supporters. One especially controversial shake-up occurred after the 2010 elections, when his Sadrist Movement granted Maliki voting powers in parliament in order to receive a comfortable majority with which to form a government.

The Dawa Party has not forgotten the meetings Sadr held in Erbil and Najaf in solidarity with the forces demanding a vote of no confidence against Maliki. Notables in attendance included Ayad Allawi, head of the Al-Iraqiyya coalition, and Massoud Barzani, head of the Kurdistan Democratic Party. Were it not for the fact that Sadr abandoned the campaign, which almost put an early end to Maliki's second term, then the Shiites’ national coalition would have disintegrated.

Past volatility ensures that any alliance between Sadr and Maliki will always be shaky, but they have not permanently separated either. Ministers from the Sadrist Movement still work with Maliki. Both sides are motivated to bury the hatchet because of their entrenched historical interest to keep Shiites at the helm. Fears over the collapse of the Shiite alliance, which would benefit the Sunnis, trouble Sadr and Maliki equally. In fact, these fears among the Shiite leaders, as the sect which acquired power after Saddam Hussein, force Maliki and Sadr to — if only temporarily — put aside their differences and maintain unity among the Shiites, lest the Sunnis depose them.

But within this coalition there is still hitting below the belt, which has begun to take on a variety of shapes with the approaching provincial elections scheduled for April 2013. The latest manifestation of which was the controversy surrounding the oil surplus dividends.

The row over the oil surplus dividends began back in September 2011, when Sadr told Maliki’s government that he would postpone his followers’ mass demonstration against the poor quality of utilities if Maliki promised to distribute 25% of the surplus revenues to Iraqis and to create at least 50,000 jobs for the unemployed.

In February 2012, Iraq's parliament approved the budget, worth about $100 billion. Two days before the voting session, on Feb. 23, the Sadrist Movement said it would withdraw its vote unless the clause authorizing the dividends proposal was included.

Over the past year, information has been scarce as to the size of the surplus. However, Araji related in his press conference that — according to Finance Minister Rafi al-Issawi — it is estimated to be around $20 million.

Meanwhile, statistics concerning benefits for the retired and job opportunities for the youth are beginning to appear that reek of electoral pandering. The latter may be an attempt to prevent bringing real development to the service sectors. Iraqi civil society activists are finding that the rivalry between political forces impedes legislation that would pump money into Iraq’s vital sectors upon which people’s lives depend.

Study of the evolution of the story surrounding the dividends proposal leads one to conclude what Haider al-Abadi — a leader in the Dawa Party and head of the Finance Committee in parliament — concluded when he said that the distribution of dividends depends on the consent of the ministries of finance and planning. He made this statement to journalists in May, three months after the Sadrist Movement’s announcement of the legislative approval of the proposal. Abadi had said, “There are those who want to advance special interests at the expense of citizens, manipulate the emotions of the masses, and character assassinate political figures for their own purposes." His message seemed to be directed at the Sadrists. With campaigning bound to start soon, the bitterness and scope of the rivalry within the alliance is plain to see.

The government, for its part, did not allow Araji’s press conference to go unnoticed. It promptly published a clarification statement on Prime Minister Maliki’s website, which included a lot of political signaling rather than technical details regarding the federal budget. It noted: “Some lawmakers think that Iraq’s citizens can be easily fooled and emotionally manipulated... Objecting to the Federal Court ruling on the budget law is a cheap attempt to make electoral gains, and insults the intelligence of the general public and their ability to distinguish between what is true and what is false, and between those who work for the public’s interest and those who try to use the public’s emotions as a bridge to certain gains."

According to Maliki’s information office, it was the cabinet, not Maliki, that sent an inquiry to the court regarding who has the power to add spending clauses to the budget. It said that the parliament has limited authority in matters of adding and rescinding clauses. But far more surprising is the lack of a 20% surplus.

When the finance minister caught wind of what Maliki's office was saying, how did he take from that that the surplus of oil surplus revenues had reached $20 million, a quarter of which is $5 billion, meaning each individual would receive $233 and 40,000 jobs would be created for unemployed youth? There is a draft version of the important budget law, and this draft overshadowed the statement from Maliki's office, which implied that the issue was merely political posturing. The contradiction is also present in a statement Abadi made last May, in which he said, "The distribution of oil surplus dividends to citizens stipulated in the national budget law will commence following instructions from the ministries of finance and planning," something which Maliki’s office recently refuted.

While conflicting information about the story of the surplus remains puzzling, it is apparent that legislation to boost development has been put in place, if only to garner more political support. This can mean one of two things: either one side fears that his opponent will be able to mobilize the masses and is thus taking the initiative to shut down operations, or that these initiatives are being launched to improve utilities simply because it is election season.

Ali Abdel Sadah is a contributing writer for Al-Monitor’s Iraq Pulse. A writer and journalist from Baghdad, he has worked in both Iraqi and Arab media, managing the editorial department of a number of local newspapers and working as a political and cultural reporter for over ten years. He has been published in various newspapers and magazines covering Iraqi political affairs, human rights and civil society.