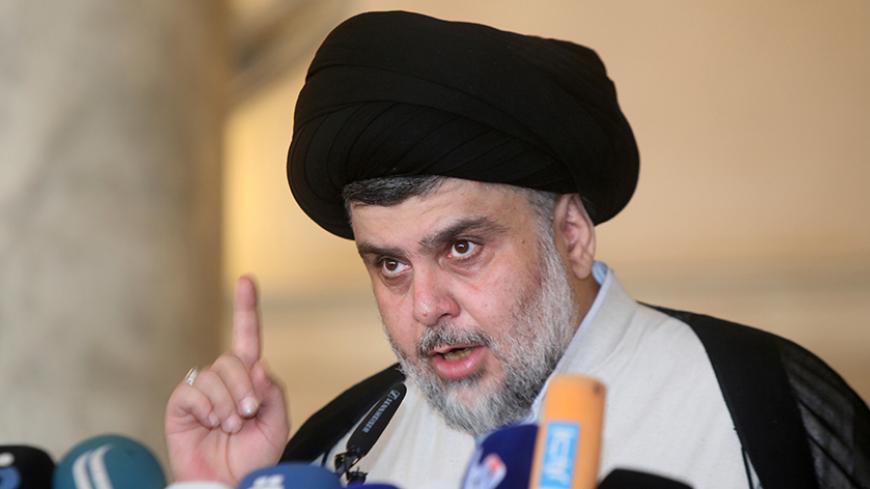 BAGHDAD — On Oct. 19, Shiite cleric Muqtada al-Sadr met with leaders of the Popular Mobilization Units (PMU) in Najaf, southern Iraq, to discuss the importance of reconciliation between him and Vice President Nouri al-Maliki. Soon after, Salah Abdul Razaq, a leader of the State of Law Coalition headed by Maliki, announced Oct. 23 that Iran is playing a role in bringing Sadr and Maliki together, as the current challenges are bigger than the differences between the two parties. On Nov. 9, the head of the predominately Shiite National Alliance Ammar al-Hakim in a letter to Iranian Supreme Leader Ayatollah Ali Khamenei thanked Iran for its support to Iraqi politicians to unite against the internal and regional threats.

With the help of some Iraqi politicians, Iran is seeking to reunite the Shiites in the near future, to strengthen them and allow them to play a greater role in the Iraqi political process and participate in determining the future of Iraq in the post-Islamic State (IS) phase.

Ali al-Adeeb, a leader of the Islamic Dawa Party and Maliki’s close associate, spoke about attempts to achieve reconciliation between Maliki and Sadr, but he neither mentioned the exact party making such efforts nor the extent of their success.

It seems that one of the first steps taken to achieve the Maliki-Sadr reconciliation was when Sadr met with PMU leaders in Najaf, as most of the leaders who met with Sadr are close to Maliki.

In this regard, a National Alliance source told Al-Monitor on condition of anonymity, “Shiite parties were supposed to initiate a reconciliation process between the two figures before the meeting between Sadr and the PMU leaders — as per the decision the federal government took on Oct. 10 — to allow the president's deputies back into their positions, including Maliki himself, which prompted Sadr to oppose, thus delaying the efforts of reconciliation.”

Shiite politicians are making efforts to reunite the Shiites for the post-IS phase. Some accuse the Islamic Republic of Iran of trying to further control Iraq through the Maliki-Sadr reconciliation, because it believes estrangement between the two would weaken the Shiite alliance and impede Iran’s projects in Iraq.

Hakim, the new president of the National Alliance, the largest political coalition in Iraq, will likely take it upon himself to achieve reconciliation between Maliki and Sadr. This effort may have been one of the essential tasks that allowed him to head the alliance, in light of Iran’s desire to secure a strong alliance.

Reports indicate that when Ali Akbar Velayati, an adviser to Iran’s supreme leader, visited Baghdad Oct. 22 to attend the Islamic Awakening Conference, he made a proposal to Hakim, illustrating the importance of mending the relationship between Sadr and Maliki and preventing any future disputes between the two.

The first step toward the Maliki-Sadr reconciliation — albeit indirect — came on July 15, when Maliki praised the Sadrist movement’s protesters for what he described as shutting down a conspiracy that the Baathist movement had been plotting in order to penetrate the protests launched on July 31, 2015.

Speaking to Al-Monitor, member of the State of Law Coalition Saad al-Matlabi said, “The dispute between Maliki and Sadr is not personal; it is a practical dispute over the political process and the situation in Iraq.”

Mounadel al-Moussawi, a member of parliament for the Sadrist movement, also told Al-Monitor that the dispute between Sadr and Maliki was not personal. "Eliminating the disagreement is in everyone's interest. Their dispute is over the political process, and we wish all differences would come to an end for Iraq to enter a new phase,” he said.

Before signs of reconciliation between Maliki and Sadr emerged, there were signs of understanding between their parliamentary blocs when they allied with other blocs to oust parliament Speaker Salim al-Jabouri.

It seems that Sadr would be stubborn during the negotiations phase, which he will resume with the National Alliance, and the 14 conditions that he presented to the alliance will be a prelude to settling the differences with Maliki.

However, some believe that reconciliation between Maliki and Sadr could be detrimental to Haider al-Abadi’s position as the head of the Iraqi government, but in fact, reconciliation can enhance the presence of Abadi in office, because Sadr requires the absence of Maliki as the head of a new Iraqi government. Although Hakim may politically disagree with Sadr and Maliki, he does not want to head a fragmented alliance. Thus, he is trying to unify the alliance to prepare it for a better performance in the upcoming elections.

In a nutshell, Sadr and Maliki will not announce a date for their reconciliation meeting, but will instead surprise everyone with news of mended ties and the start of a new chapter. If this were to happen, it would be through the National Alliance and based on an Iranian idea to strengthen the Shiite alliance in the coming period.