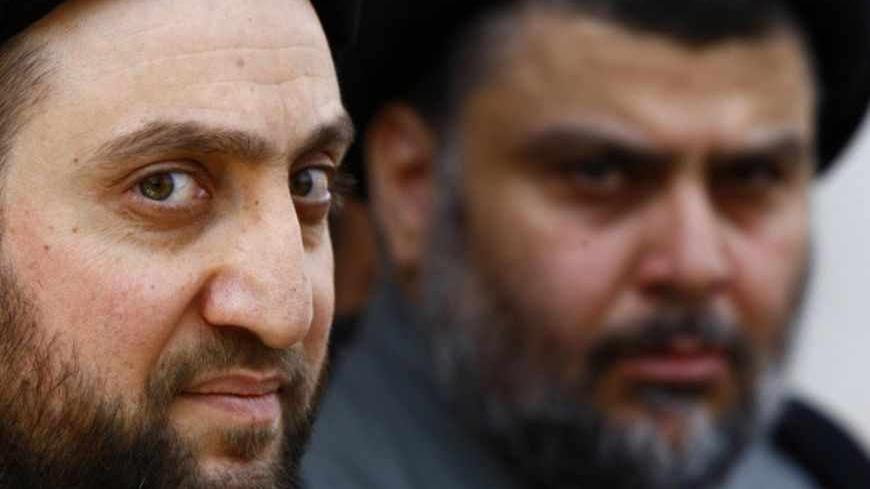 The tense struggle between the two Shiite leaders, Muqtada al-Sadr and Ammar al-Hakim, has been going on for several years. Today, however, they meet again in Najaf, their main stronghold and the center of their religious and political strength, to reject Prime Minister Nouri al-Maliki’s proposal of retaining the political majority’s option.

The Najaf meeting on May 7, 2013, was held at Sadr’s residence in al-Hanana. Journalists were expecting the two “friends and enemies,” who never held longer meetings, to be finished in less than an hour, as normal. To their surprise, this time was different, and negotiations lasted for almost three hours.

Hakim entered the Shiite town of al-Hanana, west of Najaf quite casually and quietly despite its population’s deep hostility towards his political party.

In a joint news conference, the two leaders requested that the Iraqi government hold provincial elections in Anbar and Nineveh as soon as possible, and called for the Iraqiya bloc to re-engage in the government and the parliament.

Sadr demanded acceleration in carrying out the Nineveh and Anbar elections so that the provincial elections could include all provinces.

Sadr confirmed the continuation of the good relationship with the Islamic Supreme Council to rebuild Iraq, ensure its unity and safety, serve its oppressed people and uphold the word of truth.

It is worth mentioning that this is the first meeting between Sadr and Hakim since 2012, when they met in Najaf against the backdrop of a series of intensive meetings aimed at eroding confidence from Maliki’s government in agreement with some opposition forces, including the Democratic Patriotic Alliance of Kurdistan and the Iraqiya Bloc.

In reference to the State of Law coalition, Sadr refused to marginalize any political entity in the event the Sadrist Movement and the Supreme Council decided to form an alliance. Sadr continued, “Everyone should partake in the service of the people and exclusion is not possible at this stage."

On the other hand, during the meeting Hakim called the Iraqi List to take the initiative to re-engage its ministers in the government and its deputies in the parliament. In the joint news conference with Sadr, Hakim added that “the solution to the crisis lies in the cooperation of political leaders, the acceleration of promulgation of important, necessary legislation and the provision of services by MPs.”

Concerning political alliances, Hakim stressed that “the ratification of the election results will pave the way for the formation of local governments.” Hakim continued, “It is necessary to have a broad representative base including lists and figures winning in those governments; harmonious work teams must be formed and the programs and visions agreed upon must be abided by.”

Furthermore, a political source close to the Sadr-Hakim meeting disclosed to Al-Monitor that “the two parties studied the scenarios of their alliance in a number of provinces, especially in regions where they obtained good results against the State of Law Coalition."

The source said that Hakim confirmed to Sadr the necessity of forming local governments with broad political representation, expressing his willingness to maintain the partnership approach, adding that the Sadrist movement believes that the situation in each province shapes the nature of the alliances.

The source, however, confirmed that “the two parties did not explicitly agree on an express alliance between them in all of the provinces, excluding Maliki's Coalition.”

According to the Independent High Electoral Commission (IHEC), the State of Law Coalition only obtained 97 seats in the provinces against a total of 118 seats obtained by the National Iraqi Alliance (the Supreme Council) and the Sadrist Movement’s lists.

It is worth mentioning that Maliki's State of Law Coalition lost the regions which used to be under its control, after losing in said regions around 30% of the seats it had obtained in 2009, despite its alliance with the Badr Organization, the Islamic Virtue Party and the National Reform Trend led by Ibrahim al-Jaafari. Yet, the possibility of an alliance between the Sadrist Movement and the Supreme Council looms on the horizon, threatening the State of Law Coalition with facing a difficult political period.

In this respect, Yassin al-Bakri, a political science professor at Nahrain University, believes that “any talk about Sadr's alliance with Hakim is next to impossible” and in his opinion, this is due to “historical animosity between the Hakim and Sadr families.”

Bakri told Al-Monitor that there is an “ideological difference between the supporters of Hakim and those of Sadr. The former are deemed to be of the Shiite bourgeoisie while Sadr’s supporters are the poor majority in popular areas, who are seen as being affiliated with radical religious groups unlike Hakim supporters.”

Bakri added that “Sadr supporters and Hakim supporters cannot forget their bloody conflict in 2005, when arms were used to settle the Shiite-Shiite dispute between them” and that “in the same year, Sadr supporters attacked and burned Hakim’s headquarters in Sadr City in eastern Baghdad, transforming it into a major stronghold for Sadr.”

Bakri believes that Hakim’s approach is different from that of Sadr, as he tries to gain Maliki’s influence as political leverage in the upcoming period, in particular while being fully aware that Maliki needs him in this period, even more so after the State of Law Coalition’s loss of dozens of the seats it had won in 2009.