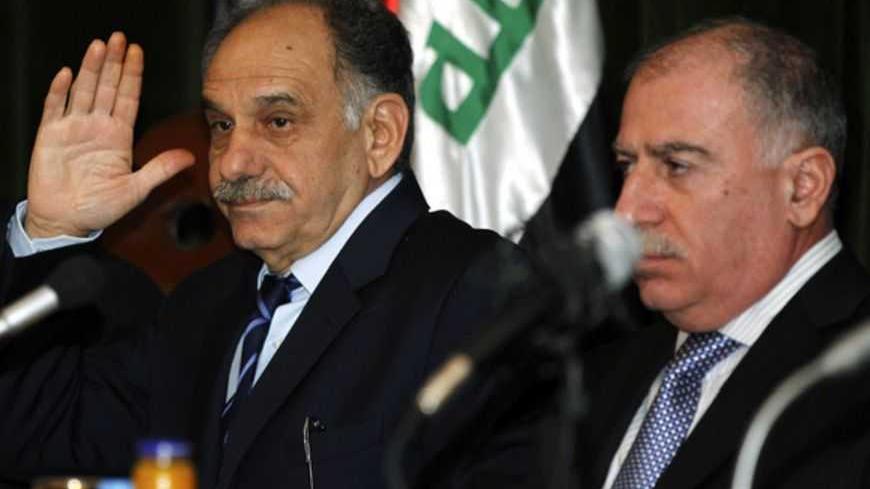 In the course of just one day, Iraqi Prime Minister Nouri al-Maliki finally opened the doors to resolve Iraq’s political crisis, which has persisted for several months. This is by largely responding to the demands of Sunni demonstrators on the one hand, and by accepting the terms of the Sadrist movement — led by Shiite leader Muqtada al-Sadr — for the return of his ministers to the government.

The meeting on Tuesday [March 26] of Iraq’s council of ministers was particularly significant, as Deputy Prime Minister Saleh al-Mutlaq announced that the council had agreed to all of the demands raised by demonstrators in the provinces of Anbar, Mosul, Saladin and Diyala. Most of these demands have to do with amending arrest procedures, secret informants, amnesty for prisoners, the release of female detainees, de-Baathification and preparing for direct negotiations with a delegation representing the protesters.

Mutlaq announced that “the council of ministers decided to abolish the secret informant [post] and the law on seizing the funds [of Baath members], and to extend special amnesty to release prisoners arrested under this law.” Despite the Iraqiya List’s decision to boycott the cabinet’s sessions, Mutlaq was accompanied by three ministers from the list, which has 88 seats in Parliament.

He explained that “it was agreed that the five-part committee would continue its work, in order to thoroughly address the accountability and justice law and general amnesty law over three days.”

Mutlaq, who considered such decisions important in resolving the crisis, sent the opposition Sunni parties an explicit message to negotiate with the government by saying, “I call on all those who have ulterior motives that affect Iraq’s unity and security to abandon them. I call on them to return to the lap of the homeland, and work with us to change the bitter reality we live in into a better reality [that ensures] people’s happiness and welfare.”

In conjunction with Mutlaq’s announcement, things went back to normal between the Sadrist movement (which holds 40 parliamentary seats) and Maliki, after the latter agreed on Sadr’s conditions for the return of his six ministers [to the Cabinet].

Bahaa al-Araji, a leader of the movement, summarized these conditions in a press conference yesterday. They include: “The formation of a committee to review the security issue in the provinces of Nineveh and Anbar, implementing the demonstrators’ legitimate demands in these provinces, adopting the rules of procedure for the council of ministers, bringing about national cohesion and finding solutions to national problems.”

Through this step, Maliki has saved his government from collapse, following the withdrawal of 20 ministers belonging to the Kurdish Alliance, the Sadrist movement and the Iraqiya List.

Although the protesters’ response to the government’s decisions is not yet clear, the announcement of Saeed al-Lafi, spokesman for the demonstrators, is a step forward on the path to resolving the demonstrations that have been ongoing for 90 days. He said that a committee — which includes the leader of the Iraqi Sahwa Movement Ahmed Abu Risha, the leader of the Dulaim tribe Ali Hatem, MP Ahmed al-Alwani, and the demonstrators’ spiritual leader, cleric Abdul Malek al-Saadi — will be formed to negotiate with the government.

Yet, the excessive optimism regarding an end to demonstrations, based on the government’s new measures, is misguided. According to political science professor Yasin al-Bakri, the crisis is in need of a serious and comprehensive political dialogue that re-characterizes the state’s foundations, and adopts a more mature vision for governance and political partnership that frames the work of the government.

These steps, according to Bakri, are necessary to promote trust among the conflicting parties, and pave the way for a large political conference to discuss the suspended issues in Iraq.

The third side that opposes Maliki is the Kurds. Information coming in from the Iraqi Kurdistan region indicates that the region’s ministers are close to returning to cabinet meetings, amid leaks of solutions suggested by mediators regarding a financial settlement for the general budget. This solution ensures that foreign oil companies operating in the region receive the $4 billion they are due, which the central government’s refusal to pay was a reason for the Kurds’ recent government boycott.