Will Anbar Elections Go Ahead?

Questions have been raised in Baghdad over the decision to postpone Anbar's provincial elections, and the decision may be reversed, writes Mustafa al-Kadhimi. 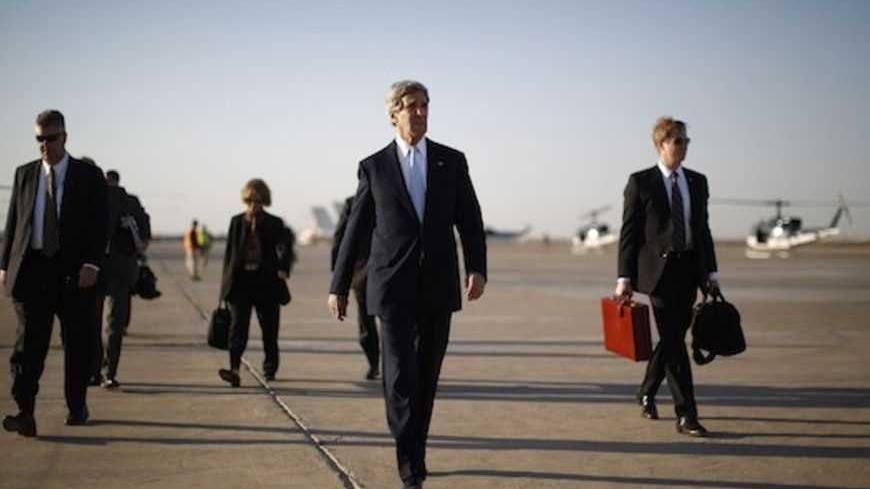 U.S. Secretary of State John Kerry walks across the tarmac of Baghdad International Airport as he prepares to board an aircraft out of the Iraqi capital, March 24, 2013, following an unannounced visit to Iraq to meet with Prime Minister Nouri al-Maliki. - REUTERS/Jason Reed

Some in Baghdad are asking whether the decision to postpone elections in the provinces of Anbar and Nineveh will be reversed, following pressure from both internal and international powers, notably the United Nations and the United States. US Secretary of State John Kerry explicitly expressed his country’s objection to this decision.

The decision to postpone elections in the two provinces — both of which have seen anti-government protests over the past three months — was explained in a brief statement that stressed two important factors. The first concerned the security situation in Anbar and Mosul, and the second involved the fear that elections would open the door for “terrorists” to assume the seat of power.

The internal response to these justifications came from the protesters themselves and from some conspicuous Shiite powers, such as the Sadrist movement and Ammar Hakim’s movement. On the international level, responses came from Kerry and from Martin Kobler, the U.N. secretary-general's representative in Iraq. The reply relies on two arguments.

The first stresses that the security situation in Anbar and Nineveh reached a peak when the Constituent Assembly elections took place in 2005, and when the constitution was passed in a referendum. A similarly disturbing situation didn't hinder provincial elections in 2009, or the parliamentary elections of 2010.

Moreover, the unprecedented turbulence in Baghdad's security situation is far worse than what has been witnessed in Anbar and Mosul. During the course of one week, 40 car bombs exploded and caused thousands of casualties in Baghdad. Anbar and Mosul didn't see similarly fervent violent acts.

The second argument addresses the fear of “terrorists” seizing power. The logical question in that concern is: how were these terrorists allowed, in the first place, to present their candidates? Since laws require that candidates present their candidacy to the High Electoral Commission for ratification, does that mean that the government is meddling in the course of elections?

Neither political elites nor Shiite cleric Ali al-Sistani, who is well known for his unflappable conservative stance, were convinced by the explanations for postponing the elections. Shiite leader Muqtada al-Sadr affirmed that the postponement was carried out for political reasons, not because of security concerns.

Several days ago, protesters in Anbar formed a committee to negotiate on their behalf. The committee is led by Ahmad Bou Risha, the leader of the Sahwa movement, Ali Hatem, chieftain of the Dulaim tribes, and Ahmad al-Alwani, a member of parliament from the Iraqi List party. This initiative was warmly welcomed by Prime Minister Nouri al-Maliki, who considered it to be a positive leap forward.

Regardless of the results of negotiations with the government, reversing the decision to postpone elections in Anbar and Nineveh will serve as a solid ground on which the foundation of these negotiations can be laid.

Objections to the postponement decision weren't raised only by Sunni political powers brokering the protests. Prominent religious figure Abdul Malak al-Saadi also issued a statement voicing strong opposition to postponing the elections and saying that the decision oppresses the rights of protesters. The government does not wish to promote and deepen this impression among Sunni citizens.

Kerry’s last visit to Iraq and his explicit statement regarding postponement, and the fact that Washington isn't convinced with the arguments for postponement, will also encourage Baghdad to reverse the decision. Kerry emphasized that this issue — along with Baghdad’s stance regarding the Syrian crisis and accusations that it has facilitated Iran’s support to the Syrian region through allowing Iranian flights to use Iraqi airspace — will constitute a future problem between Washington and Baghdad.

The provincial elections are scheduled to be held on April 20, and the decision to postpone may be canceled at the last minute. If Baghdad takes notice of the wide-ranging opposition to postponing elections and cancels this decision, it could serve as a gateway to opening the doors for wider dialogue with Sunni cities and placating their concerns.

Mustafa al-Kadhimi is an Iraqi writer specializing in defense of democracy.