The formation of a delegation from the Anbar protests to negotiate with the Iraqi government has been stalled by objections within the protest movement, claiming misrepresentation. 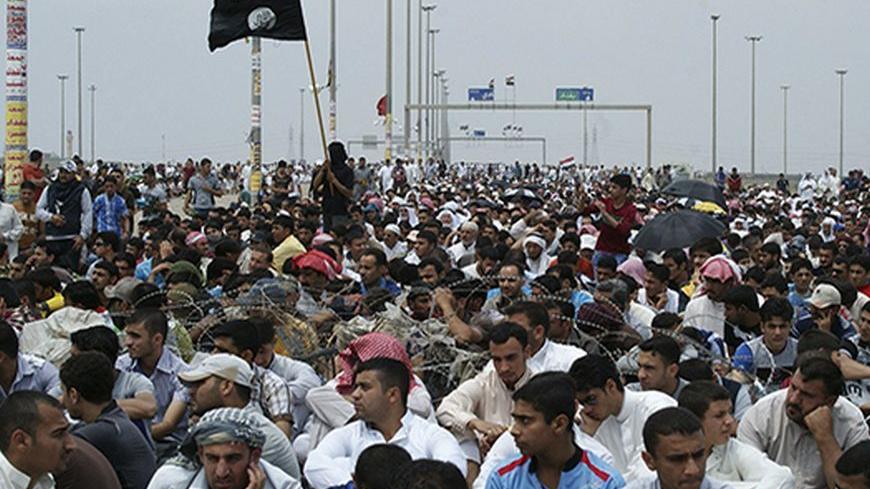 The Sunni demonstrators that have been protesting for more than 10 months are awaiting the results of the talks between Anbar’s governor Ahmed Khalaf al-Dulaimi and Iraqi Prime Minister Nouri al-Maliki about the demonstrators’ demands. On Oct. 3, Anbar’s tribes authorized the city's governor to negotiate with the government. But this authorization caused a split among the demonstrators and was rejected by some tribal elders and clerics.

A spokesman for Anbar protesters, Basem al-Anbari, indicated immediately after the announcement of the appointment that “A meeting was held between the leaders of the protests in Anbar, tribal elders and members of the provincial council, during which they decided to appoint Ahmed al-Dulaimi as head of the committee to negotiate with the federal government on the demonstrators’ demands.”

In fact, Anbar’s governor met with Maliki on Oct. 5 and told him of the demonstrators’ demands. Maliki promised to meet those demands that are “legitimate” because some demands are the prerogative of the executive branch while others are the legislature’s.

Since the Anbar demonstrations started at the end of 2013, protesters' demands have become broader and more numerous. They include releasing detainees in prisons, achieving a sectarian balance in the state apparatus, halting work on the anti-terrorism and de-Baathification laws and amending the constitution. But the authorization of Anbar’s governor to negotiate with the government was not welcomed by some demonstrating circles. A number of protest leaders rejected it, including Ahmed al-Dulaimi, who told Al-Monitor, “There are tribes that have rejected the appointment of the governor of the Anbar province, who is affiliated with the Mutahidoun bloc.” These tribes insisted on the appointment of Sheikh Abdul Malik al-Saadi as the authority over the demonstrations, indicating that the latter confirmed his refusal of any intervention by political parties in the sit-ins.

For his part, the organizer of the Fallujah sit-in, Sheikh Khaled al-Jumaili, confirmed that protesters in Fallujah reject this appointment. He said, "Whoever wants to negotiate with the demonstrators in the streets must directly contact them, without any intermediary.” He continued, “The federal government knows all of the demonstrators’ legitimate demands, in particular releasing innocent male and female detainees, ensuring equitable distribution of power and wealth and holding accountable those responsible for the deaths of protesters in the squares of Fallujah, Hawija and Salahuddin.”

Sheikh Ismail Abdul Abbas, a Fallujah preacher, said in his sermon on Oct. 4, “We will not leave the sit-in squares until we have obtained our full rights, without any omission or change."

Sources inside the squares spoke about the main reason for this disagreement. They confirmed to Al-Monitor that the Mutahidoun bloc — which is led by parliament speaker Osama al-Nujaifi and has supported the Sunni demonstrations since their outbreak at the end of 2012 — succeeded in gaining control of the governorships in the Anbar and Ninevah provinces through a political settlement, and thus achieved the objectives sought by the protests. The sources indicated that the Mutahidoun bloc believes today that the sit-ins have become a political liability instead of a means of pressure or a tool to garner electoral support.

These sources confirmed that the parties wishing to negotiate the breakup of the demonstrations are considering the sit-ins from a political perspective. These same parties previously rejected all attempts to form committees to negotiate with the government.

In the past few months, several political and tribal delegations formed to negotiate with the government, but the demonstration leaders believed they had personal interests. This was stated by Ali Hatem himself on May 30, when he objected to the appointment of the former governor of Anbar, Qasim al-Fahadawi, to fulfill the mission. Hatem said, “Whoever negotiates with the government must not return again to Anbar province.”

It seems that the problem was never the principle of negotiation with the government. This is evidenced by the fact that Saadi, who is considered a spiritual guide for the protesters, announced on May 13 an initiative to form a negotiation delegation and proposed to hold a meeting at the Askari shrine in Samarra, provided the negotiating team is formed by the demonstrators.

The problem, then, resides with the party delegated to negotiate, whether it indeed represents demonstrators and, more importantly, whether it is able to authoritively announce the breakup of the sit-ins.

The figures that sparked protests in Anbar on Dec. 23, 2012, against the backdrop of the arrest of bodyguards and staff members of Finance Minister Rafi al-Issawi, include, in addition to Issawi, tribal sheikhs such as Ali Hatem, Ahmed Abu Risha and other leaders. They subsequently formed the Mutahidoun electoral bloc, which includes Ahmed al-Alwani, Dhafer al-Ani and Nujaifi.

It is clear that those figures are no longer in control of the sit-ins and must seek a general consensus. Such a consensus must include the parties demanding the formation of an semi-autonomous Sunni region — the majority of whom are either Sunni clerics or tribal leaders close to the Islamic Party — and the parties refusing the formation of a Sunni region, led by Saadi and his supporters.