Baghdad must combine security and political efforts to bring an end to the current crisis involving al-Qaeda and the Sunnis in Anbar province. 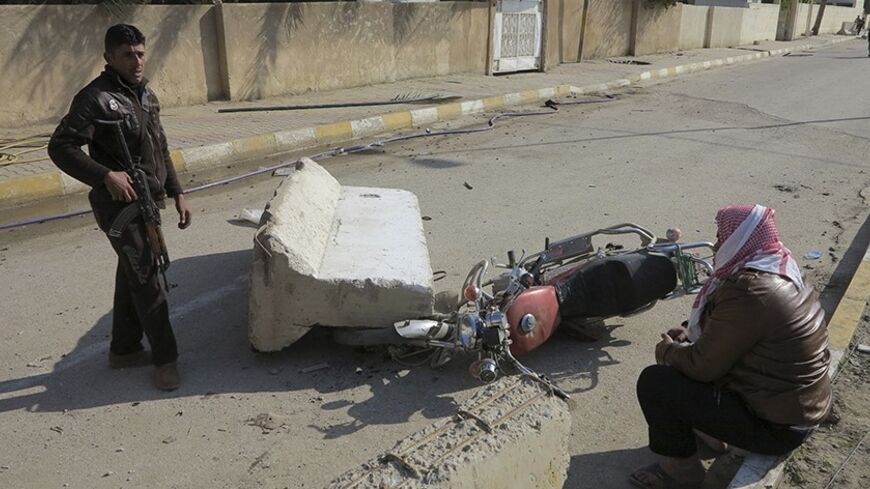 When the Iraqi army marched on the Anbar desert on Dec. 22 to wage war against al-Qaeda fighters along the Iraqi-Syrian border, the operation was viewed as an opportunity to restore the hope of achieving internal consensus around the necessity to fight extremism. Instead, however, it resurrected a state of confusion, leading to questions about the decisions being made in Baghdad as countless al-Qaeda militants brought the fighting from the border to the streets of the cities in Anbar province following the arrest of Sunni MP Ahmed al-Alwani, the dispersal of yearlong Sunni protests and the resulting rise in tribal anger.

The situation in Anbar was unstable to begin with. These areas had for 10 years been the scene of numerous security disturbances and skirmishes, as residents there continued to be subjected to marginalization and exclusion at the political level. Al-Qaeda also played a major role in the instability plaguing Sunni cities, contributing to the necessity for military intervention, various conflicts and accusations of collusion burdening the local population. The Sunnis in the affected areas complained that accusations of their belonging to al-Qaeda were used to attack them and target their political figures, clan leaders and social and religious personalities.

It should have come as no surprise when in late December in Anbar hundreds of fighters from the Islamic State of Iraq and al-Sham (ISIS) flooded into cities to burn security stations and other government sites. During the past 10 years, al-Qaeda has learned to exploit social unrest in Iraq to expand its activities and has used the tense relationship between authorities in Baghdad and the Sunni cities as an avenue for spreading its influence. The roots of the situation in Anbar are many.

First, for one full year, Iraqi authorities did nothing to address peaceful protests by disaffected Sunnis in Anbar's cities, choosing instead to ignore the protesters' grievances until the situation became too difficult to resolve.

Second, Baghdad's inability to adequately deal with Sunni cities has stemmed from a lack of understanding of the tribal and religious composition of these places. In addition, incidents with ethnic overtones instigated by members of the security forces, the manner in which arrests were being made and treatment of detainees exacerbated the estrangement between Anbar's inhabitants on the one hand and the security forces and central authorities on the other.

Third, no effective political steps were taken to normalize Anbar-Baghdad relations. As a result, the nature of Sunni political representation in the government and political processes remained tense and tied to incessant resignations from office and cascading crises.

Fourth, regional repercussions — in particular involving Iranian, Gulf and Turkish influence — added to the perpetuation of tense relations among the various segments of Iraqi society as relations increasingly soured among Iraq’s neighbors.

Fifth, the eruption of the Syrian crisis created another opportunity for the level of political and social tensions to rise, as Iraqis failed to agree on a unified political stance toward the crisis or at least failed to decide on maintaining neutrality in an attempt to immunize the country from its repercussions.

The issue of Anbar, however, extends beyond these broad considerations, which primarily revolve around ongoing problems in the relationship between the Sunnis and Baghdad, as evidenced by the events leading to the current crisis. When the Iraqi government launched the operation Revenge for Commander Mohammed on Dec. 22, its strategic military objective was to secure the Iraqi-Syrian border and restrain the geographical reach of ISIS. This was aimed at weakening ISIS, which had spread along both sides of the border, and paved the way for subsequent operations against it in the Iraqi interior.

The battle, which the Iraqi army was expected to win, revolved around preventing the militants from transforming the border region into safe havens and areas of concentration that it could use to alter the military situation and allow fighters free passage between the Iraqi and Syrian wings of the organization. With the help of US weaponry and intelligence, the army succeeded in destroying some border encampments, indicating that the balance of power there was shifting toward the Iraqi military.

Around this time, however, Iraqi Prime Minister Nouri al-Maliki ordered the dispersal of the Sunni protesters, who included leaders of Sunni clans. Then, on Dec. 28, 2013, security forces raided the home of Alwani, the MP and leader of the Abu al-Alwan clan and prominent supporter of the protests, killing a sibling and bodyguards in a firefight. Alwani was taken to Baghdad, and photos and video clips of him were leaked.

At that moment, attention in Anbar shifted from the desert operation to Alwani, whose arrest raised the ire of the Sunni clans. The rhetoric grew tougher on Dec. 28, when Sunni clergyman Abdel Malak al-Saadi issued a statement condemning the arrest and appealing for Alwani’s release, rejecting Maliki’s demands to cease all protests and calling on clans to forcefully respond to any attempt to disperse the demonstrations.

The issue then became the manner in which the government would choose to deal with the tensions caused by the arrest of Alwani, and the determination of clansmen and clergy to maintain the protests, which had begun Dec. 21, 2012. The security option won out. Iraqi forces stormed the site of the protests in Ramadi on Dec. 30, 2013, and forcibly dispersed the demonstrators, leading to widespread confrontations with clan militants, followed by mass resignations of Sunni representatives from parliament and calls for people to take up arms against the army.

The other controversial security decision was the order for Iraqi army troops to withdraw from Anbar cities on Dec. 31. The decision, meant to placate the clans, was immediately followed by the widespread appearance of al-Qaeda gunmen inside these same cities. Some of them, according to a videotape posted on Dec. 29, 2013, arrived from Syria, led by the notorious ISIS field commander Shaker Waheeb, who, it was later claimed, died in battle in Anbar.

The increasingly chaotic situation, the fall of dozens of security posts and the announcement by Anbar clan leaders who had led the protests, including Sheikh Ahmed Abu Risha, that they would fight against al-Qaeda, reshuffled the cards and allowed the Iraqi army to return to Anbar’s cities to liberate them from al-Qaeda. On a security level, analysis of the military decisions made during the crisis and their effectiveness can wait until after al-Qaeda is ousted from the cities. On a political level, however, one cannot postpone discussing the manner in which the government dealt with the Sunni protests, considering they were one of the main reasons for matters degenerating to their current state.

An initial assessment indicates that the government failed throughout 2013 to differentiate between moderates and extremists taking part in the protests. It did not initiate a dialogue with the moderates among them until the crisis worsened, leading to Maliki eventually meeting with Sheikh Abu Risha in Baghdad. The failure to differentiate between clans that felt marginalized and those with religious motivations or specious goals point to an important question that is not being seriously examined in political circles: Were the thousands of gunmen who unprecedentedly appeared on Anbar city streets all members of al-Qaeda?

The information available from inside Anbar indicates that ISIS only had a few hundred fighters spread among sleeper cells in Sunni cities and the border encampments. The momentum acquired by the organization appears to have resulted from impressionable young clansmen, receptive to religious fatwas, joining its ranks to repel the government’s “invasion” of Anbar and fight alongside al-Qaeda, despite not previously being associated with it.

Resolution of the Anbar crisis cannot be arrived at through security measures alone or through solely political approaches. Rather, a solution must entail the adoption of coordinated security and political efforts to guarantee the support of moderate politicians and clan leaders. It must also involve a framework for getting the gunmen who recently joined ISIS to return to the fold of their clans, establishing cooperation between Anbar inhabitants and security forces to expel the organization from Sunni cities and speeding the deployment of Iraqi army troops so they can complete their mission along the Iraqi-Syrian border. Furthermore, an honest dialogue must be initiated with political, religious and clan representatives of Anbar province to settle the differences that led to the protests and prevent their recurrence.