Historically targeting non-central parts of the countries in which it operates, al-Qaeda, in the form of ISIS, is taking advantage of prevailing instability in Syria and Iraq to deepen its roots. 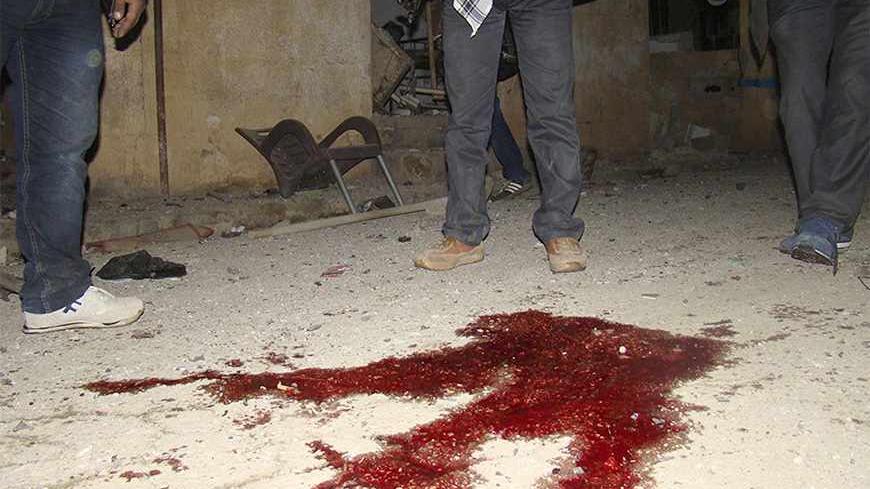 Bloodstains are seen on the ground after a suicide bombing at the Kurdish Internal Security Forces Center (Asayish), Qamishli, Nov. 23, 2013. The al-Qaeda linked Islamic State in Iraq and al-Sham (ISIS) claimed responsibility for the bombing, which killed three people and wounded nine others, activists said. - REUTERS/Massoud Mohammed

Mustafa Alani, a researcher on Security and Terrorism Affairs at the Gulf Center for Research, believes that al-Qaeda — despite its success in reorganizing its ranks in Iraq — still lacks strategic depth and a welcoming environment in the long run. Therefore, it is seeking to establish a more fluid entity in regions on both sides of the Iraqi-Syrian border to fight the military pressure it could face in Iraq by redeploying itself in the Syrian territories. The opposite would be true if it were faced by Syrian pressure. Hence, the Islamic State in Iraq and al-Sham (ISIS) is a project to build a state that feeds on the failure and fragility of the governments in Iraq and Syria.

Al-Qaeda’s strategy is based on gradually controlling non-central regions especially in Anbar, northern Babylon, northern Diyala and parts of Mosul, and setting off to shake the control of the federal government in the city centers. Moreover, the organization aims at pushing the army to focus its efforts on defending those centers rather than attacking its camps.

Alani also believes that the wave of attacks that targeted Baghdad in the last several months aimed to draw the Iraqi Security Forces (ISF) into the capital to facilitate the organization’s activity in the regions located in the northwest toward the Syrian border. At the same time, luring the Iraqi army into battles in the desert might lead to exposing the city centers, thus making them easy targets for huge attacks.

We can conclude that ISIS has succeeded until now in achieving a balance of its activities. On the one hand, it has increased attacks on the ISF as part of the “Soldiers' Harvest” campaign, and on the other hand, it has preserved its dormant cells in Baghdad and in city centers where the organization targets civilians — mainly by car bombs — to reduce the pressure on its strongholds and assert itself.

In an interview with Al-Arabiya television on Nov. 9, Iraqi Deputy Interior Minister and its powerful man Adnan al-Asadi said that the Iraqi government has made recent important victories in the fighting against the ISIS, whereby many of the group's leaders were arrested and its camps were disintegrated. However, Asadi pointed out that the war with the ISIS is a tough confrontation, especially since the organization is deployed in vast desert areas on both sides of the Iraqi-Syrian borders, that are difficult for any army to control. It seems that the desert war with this organization will require a lot of time and resources. Moreover, it will not end unless there will be an end for repercussions of the Syrian conflict, which Asadi considers the first reason behind the re-emergence of al-Qaeda in Iraq.

It is interesting that Asadi acknowledged in the TV interview that the organization succeeded in infiltrating the ranks of the ISF. He considered that most car bomb attacks were arranged or facilitated by security personnel. This acknowledgment reveals the magnitude of the task to be addressed by the Iraqi government. ISIS is an organization that enjoys a growing professional combat ability and depends on ideologically devoted fighters and more sophisticated funding networks, composed of taxes collected from businesses in its Iraqi and Syrian strongholds, the Turkish-Syrian border crossings it has controlled and foreign donations.

More importantly, ISIS is acting in environments with tough conditions that the Iraqi army cannot endure. It is also exploiting the existing lack of trust between the army and the population. Asadi insinuated this by saying that the army has withdrawn from city centers in Anbar in response to the people’s desire.

During his visit to Washington, the Iraqi prime minister was told that, to confront al-Qaeda, he must earn the trust of the Sunni population. Maliki has been trying to do so since his return to Baghdad. He has held two meetings with Anbar officials and agreed to meet some of the protesters’ demands and promised more support for the local government of this large city where al-Qaeda has maintained a strong presence.

However, it is still too early to judge this approach and ascertain whether it represents a genuine shift or it is a mere electoral tactic. Obviously, the seasons leading up to the election are not favorable to reach substantial settlements. Moreover, creating a political environment conducive to national reconciliation may require waiting for the upcoming elections on April 2014 and their results.

It will be difficult to defeat the ISIS in Iraq if the conflict in Syria persists. This organization came to be a transnational insurgency and has thus become a regional problem that cannot be resolved for good without a real regional settlement instead of temporary truces. ISIS is a terrifying embodiment of all of the problems in a region vitiated by exclusionary regimes, political corruption, failed economies, demographic inflation and extremist ideologies. It is worth mentioning that the survival and growth of the ISIS portray the frightening future that awaits this region if the regional and local elites fail to realize the nature of the problems that allowed it to emerge in the first place.