The Iraqi army has launched an operation to seal the border with Syria and defeat al-Qaeda in western Iraq. 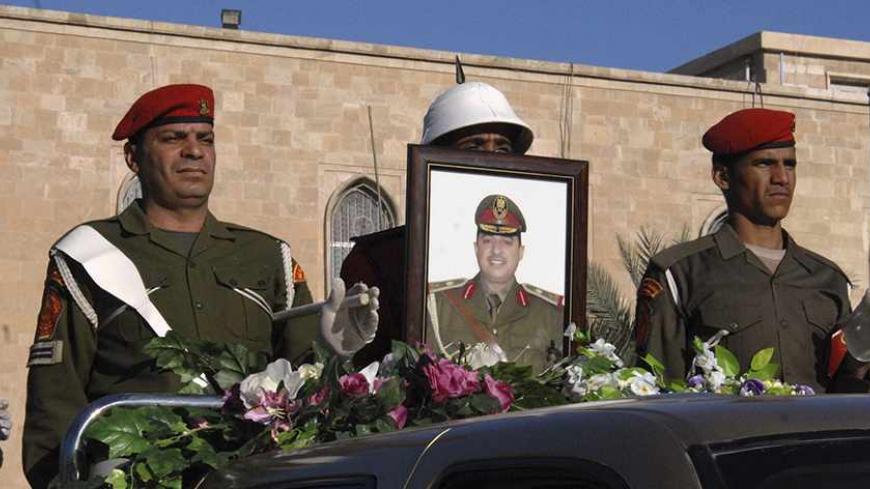 Soldiers ride on the back of a military vehicle carrying the coffin of the commander of the army's Seventh Division, Maj. Gen Mohammed Ahmed al-Kurwi, during a funeral in Baghdad, Dec. 22, 2013. - REUTERS

On Dec. 23, Iraqi Prime Minister Nouri al-Maliki announced the launch of a military operation against al-Qaeda near the Syrian border. The operation was dubbed “Avenging the Leader Mohammad.”

Many in Iraq are hoping that this operation will eradicate al-Qaeda. However, the fact remains that the Anbar battle is over military control of the area after al-Qaeda tried to establish a foundation to fuel its activities on both sides of the 600-kilometer (373-mile) Syrian-Iraqi border.

Considering the context, the operation seems to be a reaction to the killing of a number of senior Iraqi army officers, including Maj. Gen. Mohammad al-Rawi, the commander of the 7th Division, in an ambush in the Horan valley desert, near the town of Rabta in the far west of Iraq, on Dec. 21.

The announcement of the military operation seems to have been warmly and widely greeted, especially in Baghdad and southern Iraq. But many in the cities of Anbar, Mosul and Salahuddin fear its implications.

The operation was launched for several reasons.

First, in the past, the Iraqi army was not armed in a way consistent with the launching of major operations in large desert areas. But in recent months, the army has received helicopters, American and Russian fighter jets and monitoring equipment from an earlier deal, enabling the Iraqi army to support its ground troops. The Iraqi air force had been active in the Anbar desert for weeks before the military operation.

Rashid Fleih, a leader of the Anbar operations, told Al-Monitor that the Iraqi army had received US equipment and supplies to be used in the battle against groups affiliated with the Islamic State of Iraq and al-Sham (ISIS). The New York Times revealed Dec. 25 that Washington will supply Iraq with a map showing the locations and origins of al-Qaeda in Iraq, besides 75 Hellfire air-to-land missiles and 10 ScanEagle reconnaissance drones. This information was confirmed by the prime minister's spokesman, Ali al-Moussawi, in a statement released Dec. 27.

Second, the nature of the developments in Syria point to the crystallization of a new reality after militant groups associated with al-Qaeda, like ISIS and Jabhat al-Nusra, have taken control of the northeastern regions of Syria bordering Iraq. This situation gave ISIS an opportunity to change its Iraq strategy, which went from being based on guerrilla warfare, planting sleeper cells in neighborhoods and a nebulous structure to establishing outposts, building logistical camps and establishing mobile sanctuaries across the border, especially as the environment in those isolated areas changed.

Third, the interdependence between al-Qaeda groups in Iraq and Syria is critical not only on the geographical level, but also in military plans. It used to be difficult for al-Qaeda to manage its operations in the two countries, using two very different strategies. Thus, since the start of the Syrian conflict, the Iraqi-Syrian border has been a central strategic target for al-Qaeda, more so than Damascus and Baghdad, because erasing the border by eliminating the official controls on it means, strategically, the possibility of a “new state” that would include the Sunni areas in Iraq and more than half of Syria, in accordance with demographic and sectarian factors. That would increase the support for a Sunni province among the political and religious groups in those areas.

Fourth, Maliki, who's seeking a third term, cannot go into the parliamentary elections at the end of April without a real achievement on the ground. The fact is that Maliki’s greatest achievement during his reign was to re-impose the rule of law by military force after the 2006-2008 civil war. A security achievement would greatly help his election chances. His breaking up the Sunni sit-ins may also serve this purpose.

Fifth, international circumstances, especially after Maliki's US visit, the US-Iran rapprochement and the soon-to-be-held Geneva II conference on Syria will create an international environment more sympathetic toward the Iraqi government’s war against al-Qaeda.

Regardless of the security results produced by the “Avenging the Leader Mohammad” operation, which has already announced the killing of ISIS members and the destruction of camps and arms depots, the operation has several dangers:

Today, more than ever before, it may be possible for Iraqi forces to win control of Anbar. But holding the ground is only half the battle with al-Qaeda. The other half lies in developing the security, intelligence, social, political and diplomatic efforts to starve al-Qaeda of funding sources, block its moves and prevent it from developing new strategies to perpetuate violence.

Before that, what Iraq needs is the restoration of social harmony, which the country has lacked for years.