In spite of calls from the government to postpone the Anbar sit-ins until after parliamentary elections, protesters there say they will not leave until their demands are met. 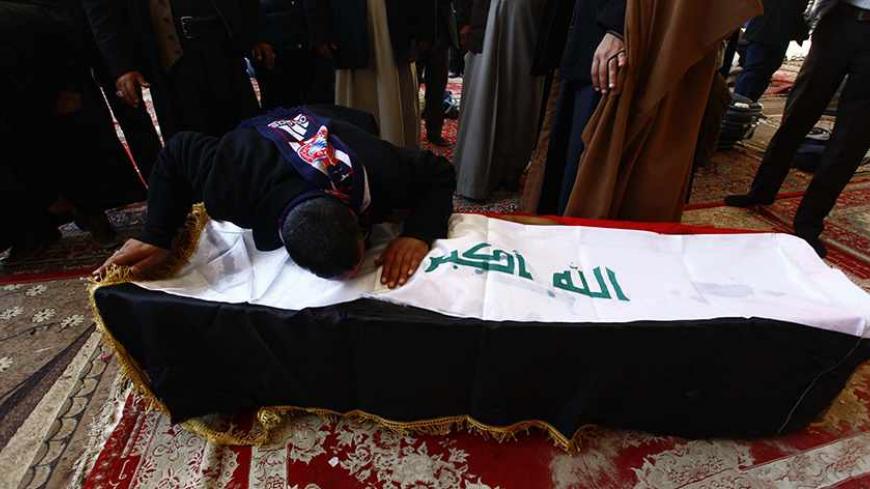 A man reacts on a coffin of his relative, who was killed in an attack in the western town of Rutba Anbar province, Najaf, Dec. 22, 2013. - REUTERS/Alaa Al-Marjani

Assassinations targeting officials in Anbar province in western Iraq are increasing to a terrifying rate. The al-Qaeda-affiliated Islamic State of Iraq and al-Sham has claimed responsibility for the majority of the killings.

The operations now being carried out by al-Qaeda seem more organized and more violent than those of the past. Over the past two months, al-Qaeda-affiliated groups have killed officers and district directors and threatened to kill security forces if they continue to serve in the ranks of the army and police. In addition, they have carried out car bombings and raids against government headquarters.

On Dec. 11, the Anbar provincial council called on protesters to remove tents from the sit-ins "to prevent the issue from being exploited politically, in light of the approaching elections." The council also asked protesters to postpone sit-ins until after the parliamentary elections. However, the protesters rejected these calls and declared the formation of the "Glory and Dignity Army" with the blessing of the grand mufti of Iraq.

Omar al-Dulaimi, an Iraqi journalist from Fallujah, told Al-Monitor, "The security situation is deteriorating rapidly with the approach of elections, which seem to expedite the security disturbance in the province." He pointed to the presence of "militias affiliated with political parties in Anbar, which — along with al-Qaeda — contribute to the deteriorating security [situation]."

On. Dec. 21, 18 soldiers from the Iraqi army's seventh division — including the division's commander — were killed during a raid on an al-Qaeda den in the Horan Valley. An additional 32 soldiers were injured in the raid. Following this incident, the security forces conducted "wide scale" military operations in the Anbar desert, including combat squadrons backed by military helicopters.

Mazhar al-Janabi, a member of the parliamentary Security and Defense Committee, said that these operations "will only lead to more innocent people in the province being arrested and thrown in prison without charges." He added, "The decline in security will continue in Anbar, due to the lack of coordination between the Security and Defense Committee and the security forces in the province."

Janabi told Al-Monitor, "Families in Anbar are harboring terrorists, including members of al-Qaeda and other groups, because of the government's failure to [meet the demands] of the protesters and the families in Anbar."

A security source involved in the Anbar Operations Command told Al-Monitor, "Some members of the security forces withdrew from the army and are staying at home because of threats made by al-Qaeda that they would kill their families if they continue to fight alongside the ranks of the army and the police."

The security forces face several challenges in Anbar, including controlling the nearly 600 kilometers (373 miles) Iraqi-Syrian border, through which weapons and Arab and foreign fighters cross into Syria.

The same security source noted, "Grad rockets are being smuggled from Syria to Iraq, meaning that the army and police headquarters could be targeted more than they already are now."

Mohammed al-Bajari, the official spokesman for the sit-in in Fallujah, said, "The sit-ins will continue." He added, "The protesters will not leave the sit-in squares until their legitimate demands are met, oppression ends and the innocent people are released from prison."

Bajari clarified that the protesters "will not comply with the orders of political parties or failed politicians, [nor will they respond to] threats by militias." He alluded to preparations for "civil disobedience and internationalizing the issue via international courts."

Bajari noted, "Those present in the squares have tribal connections, which would exacerbate the crisis in the event that the protests were subjected to any attack." He stressed, "[The right to] peaceful sit-ins are guaranteed by the constitution. Citizens have the right to protest as long as the constitution guarantees this right." He also pointed out, "Any [measures that are] non-peaceful will lead to bloodshed."

Bajari explained, "The Glory and Dignity Army was only formed in the city of Ramadi. It does not direct weapons at the army or the police, but rather at militias — which I won't name — that are trying to eliminate the sit-ins."

Dulaimi said, "The people of Anbar feel that the central government does not care about their demands. The residents are resorting to sit-ins to secure the release of their fellow citizens who have spent years in prison without any trial."

Bajari denied that "any member of al-Qaeda or any other outlaws were present at the sit-ins." He added, "The protesters are being subjected to daily searches by the security forces. The latter know that everyone is from the province, and they do not carry weapons."

Yet, in a speech broadcast on state television Dec. 22, Prime Minister Nouri al-Maliki insinuated the possibility of raids on the sit-ins, saying that they had "become a stronghold for al-Qaeda." He added, "We cannot tolerate al-Qaeda having any protected headquarters from where they can implement terrorist attacks."

Dulaimi noted, "Things will get worse if the sit-ins are broken up because of the tribal vengeance that will follow military operations that result in harm to the protesters."

A pro-Maliki Facebook page called "We choose Maliki for a third term" published footage of the army traversing the Anbar desert, searching for al-Qaeda bases. However, according to Janabi, the solution lies in addressing the demands of Anbar's residents, to cooperate with the tribes to eliminate al-Qaeda.