The political roots of the Anbar crisis

The current crisis in Iraq’s Anbar province can only be solved through a political solution. 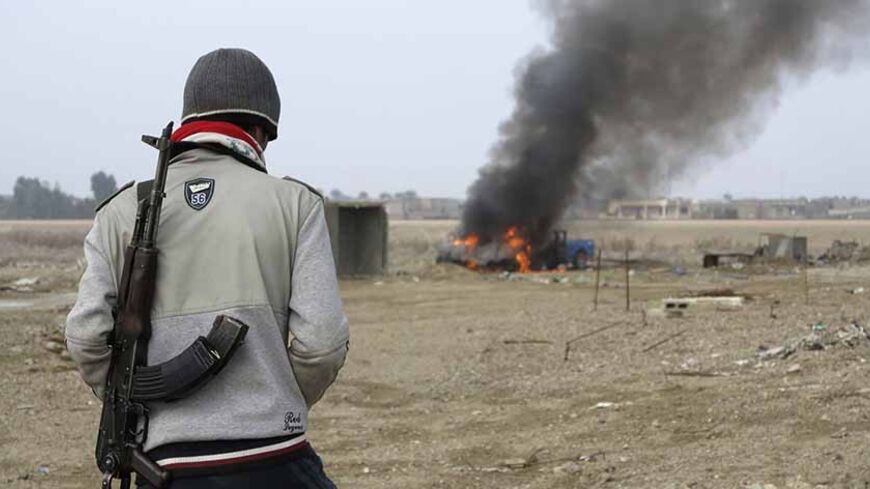 More than 40 days since the start of the Anbar battles in western Iraq, the financial and human losses thus far are yet unknown. What has been revealed, however, is that Prime Minister Nouri al-Maliki agreed to discuss a “peaceful” political solution to the crisis.

The question that ought to be raised today concerns the erroneous analyses that preceded and caused the crisis.

First, it should be emphasized that the Anbar crisis was never a purely military crisis. This is because the Islamic State of Iraq and al-Sham (ISIS) has been in the province for years, as well as in Baghdad, Mosul, Basra and even Najaf.

At the end of the day, when talking about an incredibly complex terrorist organization such as al-Qaeda and its derivatives, one cannot deal with it as a regular army that can be fought by conventional means. Such organizations appear and disappear without even leaving a trace. When conditions make it difficult for them to appear in public, these organizations disperse within different social environments and return to their origins as secret groups.

It is from this particular point that one can say that the political decision taken late last year to attack the Sunni sit-in camp in Anbar and disperse it by force, under the pretext of the existence of al-Qaeda, was a decision of multiple dimensions and political calculations worth reconsidering.

Throughout the months leading up to the crisis, Maliki repeatedly accused the sit-in camp of harboring terrorists. He then promoted other information, according to which car-bombing operations throughout Iraq were being organized from within the sit-in squares.

Last month, however, a completely different hypothesis was proven. The Iraqi government seemed to be in dire need of support from figures within the Sunni sit-in movements to disperse battles and impose the prestige of the state, which had disappeared from the cities of Anbar in various forms. They also needed these figures to expel ISIS, which had gained unexpected strength in Anbar.

Since the first day of the crisis, the government resorted to elders and figures participating in the sit-ins to settle the crisis. Chief among these was Ahmed al-Dulaimi, the governor of Anbar and one of the former leaders of the sit-ins; Ahmed Abu Risha, a Sahwa forces commander of Sahwa who was isolated months ago; and Albu Fahd Rafi Abd al-Karim, a tribal leader. Many of these names and leaders of other clans have declared their willingness to fight for the liberation of Anbar from ISIS, and they formed new Sahwa forces for this purpose. However, they failed to put an end to the crisis. The truth of the matter is that the many tribal leaders in Fallujah, including the tribe of al-Dalim Ali Hatem, among other well-known leaders supported by a wide population, have come to realize after weeks of fighting that the Sahwa will not succeed this time, as was the case in 2006, when the forces were recruited by the US forces under the command of Gen. David Petraeus.

Back then, the objective conditions were different from today, even the form of the crisis is now quite different. Demonstrations were back then an indication of an unsettled political conflict.

On the other hand, today’s conflicting parties in Anbar consist of tribal leaders, clerics and political forces in the city that are taking advantage of the demonstrations and military confrontations to establish their political presence and interests for the elections.

The demonstrations spawned a political map in Anbar that is in line with the inclinations in the sit-in squares. Following the April 2013 elections, the government was formed by members from within the sit-in tents. Things would have been similar this time around, had the protests dragged on until the general elections in April 2014.

All parties in Anbar have ignored the political implications of the crisis and assumed the only solution lies in the military solution. At the beginning of 2014, the government intensified its military presence in Anbar, announcing that the crisis would be settled through the army and security services, and calling for further reinforcement.

On the other hand, some tribes, clerics and forces opposing Maliki stepped up military confrontation and opened the door to different armed groups, including ISIS. They believed that this would pave the way for a different political reality, only to realize after weeks of fighting that the political solution is the only way to end this crisis.

It is good and promising news that the government and the opposition are opting once again for the political solution, especially since there have been exerted efforts and initiatives to put an end to the crisis before the Iraqi parliamentary elections. However, the political solution ought not to be an opportunity to turn a blind eye to the victims of the clashes, be they civilians or security forces. Have those paid the price of a political crisis, whose conflicting parties thought they can solve militarily?