The fighting in Iraq’s Anbar province is complex, with forces belonging to the Islamic State of Iraq and al-Sham (ISIS), local tribes, al-Qaeda and assorted armed groups. 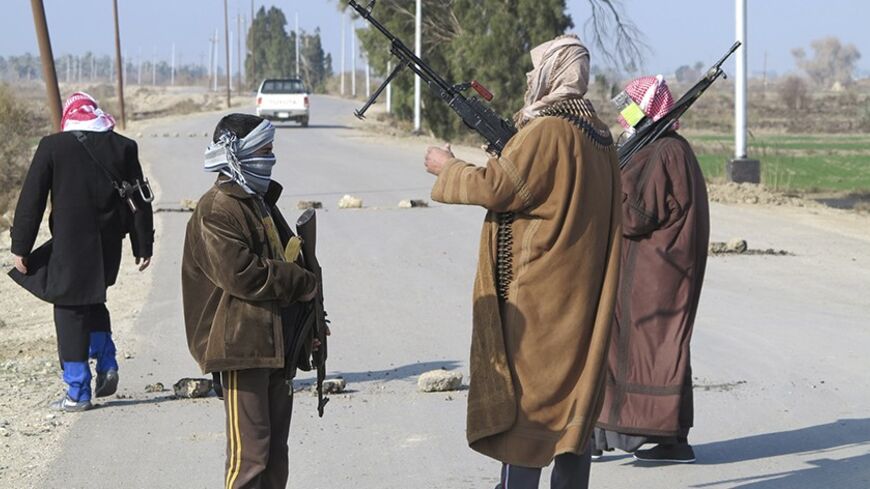 Tribal fighters deploy themselves on the streets of Ramadi, Jan. 6, 2014. Iraq's prime minister urged people in the besieged city of Falluja to drive out al-Qaeda-linked insurgents. - REUTERS/Ali al-Mashhadani

A little more than a week after the outbreak of violence in Anbar province, the picture of the forces fighting on the ground has become clearer. It does not, however, correspond to official Iraqi pronouncements that the conflict only involves two parties: al-Qaeda versus Iraqi security forces and their Sahwa tribal allies. At the same time, the picture also does not support declarations by Fallujah tribal leaders that the conflict is mainly one of the tribes versus government forces. Rather, Al-Monitor sources in Fallujah have confirmed the presence of at least four distinct fighting forces in and around that city.

The situation remains foggy, especially in Fallujah, where the Islamic State of Iraq and al-Sham (ISIS) emerged one day after gunmen claiming to belong to Anbar’s Sunni tribes mobilized against the Iraqi government’s decision to arrest Sunni parliamentarian Ahmed al-Alwani and break up the Ramadi sit-in by force, one year after the Sunni demonstrations had begun. The ISIS convoys of 4x4 vehicles —  armed with medium weapons and anti-aircraft guns and waving the al-Qaeda banner — were terrifying and supported the scenario being presented that the ISIS had seized control of Anbari cities, in particular Fallujah, and had declared an Islamic emirate.

Almost immediately, Sahwa leaders, most prominently Sheikh Ahmed Abu Risha, announced that they were fighting al-Qaeda (in his case despite his being one of the most prominent leaders of the Sunni sit-ins against the government). The Sahwa fought fierce battles against the al-Qaeda groups and managed within hours to restore official authority to most Anbari cities, except Fallujah.

The scene in Fallujah is murky. A group of prominent Anbari tribal leaders, led by Sheikh Ali Hatem al-Salman, the emir of the Dulaim tribe, has insisted that al-Qaeda is not in the city and that the confrontation there is between the tribes and the government and will continue until Sunni demands are met. The most notable demands are the release of MP Alwani and other Sunni detainees, representational balance in state institutions and repeal of the de-Baathification and anti-terrorism laws.

Information out of Fallujah, revealed to Al-Monitor by a member of the Tribal Revolutionaries' Council who requested anonymity, confirmed that some 300 ISIS members had arrived in Fallujah on the morning of Jan. 3. Most of them had just withdrawn from confrontations with tribes in Ramadi. According to the council member, “Tribal gunmen surrounded the al-Qaeda gunmen as soon as they arrived. That happened at the same time as Friday prayers, during which one al-Qaeda leader announced to the worshipers from a [mosque] platform that ISIS had come to Fallujah to protect its people and uphold the banner of Islam.”

He added, “The Fallujah tribes didn’t clash with al-Qaeda, but they didn’t coordinate with it either. It was agreed that [al-Qaeda would] move to the outside of the city of Fallujah, and that did happen. The al-Qaeda group, which had 30 4x4 vehicles, moved to the military neighborhood south of Fallujah and on to the international road linking Baghdad, Amman and Damascus, and from there some of them infiltrated the Abu Ghraib area, east of Fallujah.”

This, however, is only one take on the situation inside Fallujah. Neutral sources in the city confirmed to Al-Monitor that four armed groups are deployed inside the city and on its outskirts:

The picture on the ground is made complex by overlapping forces. No one can say for sure whether there is coordination among these various groups. The most credible information indicates that the Tribal Revolutionaries is the largest, with thousands of fighters affiliated with tribal leaders and clerics, and is native to Fallujah. Meanwhile, outside Fallujah, besides Iraqi Army forces stationed east and north of the city, government Swat police forces have been deployed south and west of it connected to Ramadi. Tribal Sahwa forces are present in the areas of the Swat and army contingents, but are less influential in Fallujah compared to in other cities in Anbar.