Local fighters in Fallujah opting for reconciliation with the Iraqi government may have forced the Islamic State of Iraq and al-Sham (ISIS) to change strategy. 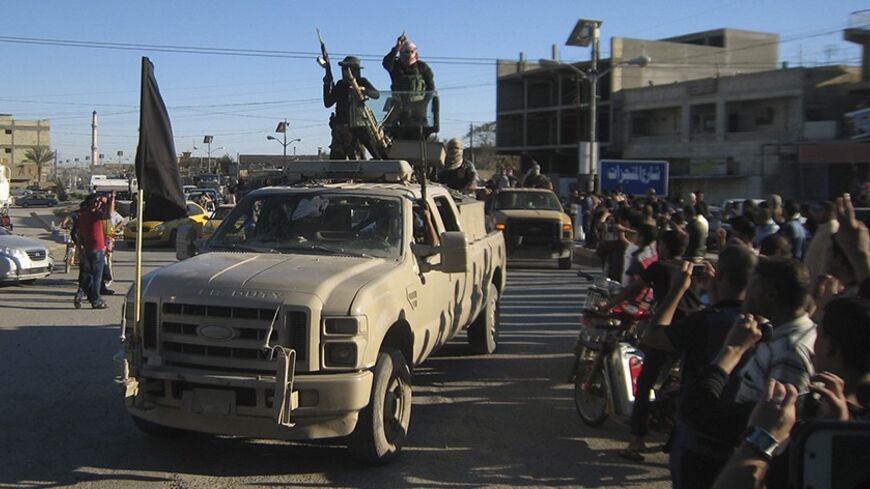 Three months after the Islamic State of Iraq and al-Sham (ISIS) decided to avoid public appearances and maintain a low profile in Fallujah, the group put on a military parade in the center of the city to showcase its strength. The move signaled the start of an armed conflict to control the city.

On March 20, ISIS fighters staged a parade in downtown Fallujah. The parade was similar to previous ones, with convoys of cars carrying the group’s flags. This time, however, ISIS used Humvees, the type owned by Iraqi government forces and the police. ISIS had seized most of the vehicles after battles with the Iraqi army.

The parade appears to have been directed at the official Iraqi forces, which failed to break into the city despite shelling it daily. Yet, the parade also marks the end of the truce between ISIS and the armed tribes that have sprung up in Fallujah since the beginning of this year.

The armed groups in Fallujah consist primarily of fighters organized under the so-called “military council for the tribes of Fallujah.” These fighters are affiliated with armed groups that are not linked to ISIS, such as the Army of the Naqshbandi Way, Hamas Iraq, Jaish al-Murabitoun, Jaish al-Islami and Katayeb Thwarat al-Ishreen, in addition to Salafist fighters affiliated with the international al-Qaeda organization and not loyal to ISIS. These Salafist fighters previously fought with Jabhat al-Nusra in Syria. In addition, there are less organized fighters affiliated with the local clans and led by Sheikh Ali Hatem al-Suleiman.

ISIS fighters used to be present amid those overlapping forces, but under the guise of coming to help the local fighters unconditionally. Thus, ISIS avoided colliding with tribal groups and agreed to requests to stop fighting or lead operations.

However, during the past month, the relationship between these parties has changed. Most of the forces in the military council of the tribes were close to accepting a reconciliation with the government to prevent the Iraqi army from entering Fallujah, put an end to the fighting and achieve some Sunni demands. That reconciliation would have threatened ISIS’ vision, one that does not include reconciliation.

Observers of the events in Fallujah told Al-Monitor that there have always been differences between the fighters inside the city, but those differences were kept under control when the danger of the Iraqi army entering was high, and simmered when the fight with Iraqi forces quieted down.

For this reason, the Iraqi army choosing to put off storming Fallujah, a costly option in terms of human lives, money and morale, thus escalating the power struggle inside Fallujah over the right to determine the outcome of the crisis there.

According to Al-Monitor's sources in Fallujah, the tribal elders and military leaders of the factions within the city always knew that ISIS will turn on them the moment it deems appropriate. The recent parade can be seen as the beginning of a coup by ISIS fighters against the tacit agreement that ISIS works within other organizations.

This is a complex issue that cannot be understood without going back to the history of the conflict between al-Qaeda and the factions formed by Salafist jihadists, the Muslim Brotherhood and Baathists.

Starting in 2006, Anbar and other Iraqi areas witnessed fierce clashes between these parties. Many fighters were placed under the auspices of the US military as part of the Sahwa organization, which succeeded in undermining al-Qaeda and killing or capturing most of its leaders before al-Qaeda started its gradual revival in 2009.

The parade by ISIS reveals the start of a fierce internal conflict between the gunmen in Fallujah. Of course, ISIS hopes that its parades will kill two birds with one stone: taking over the decision-making from the tribal elders, clerics and some faction leaders and dragging the Iraqi army into a confrontation, thus forcing the rest of the factions and clans to work under ISIS to defend Fallujah.

The history of ISIS in Iraq shows that wherever it is present, it assassinates its competitors, gets rid of moderate clerics and opponents in various ways and imposes Sharia courts. That phase has not yet started in Fallujah, but the parade suggests that it could begin at any moment.