How will Baghdad plan for liberated Fallujah?

The Iraqi government needs to plan for the post-liberation phase in Fallujah in order to prevent the city's seizure by terrorist organizations. 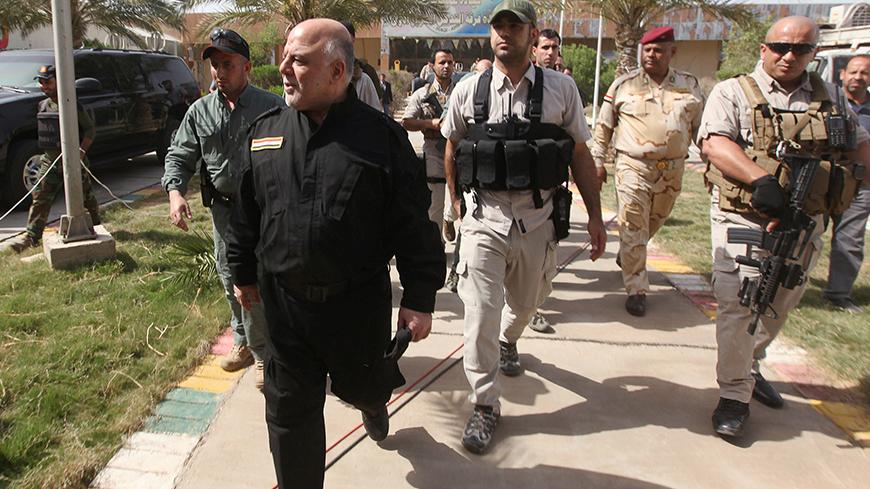 NAJAF, Iraq — On May 23, Iraqi Prime Minister Haider al-Abadi announced the beginning of military operations to retake the city of Fallujah. Operations have been successful so far, as several parts of the city’s outskirts were liberated. Iraqi forces settled at the gates of Fallujah after liberating Saqlawiyah in northern Fallujah on May 28.

Operations to liberate the city are expected to be completed in the coming days. The biggest challenge, however, is to plan the post-liberation phase, which will point at the government's power to take full control over the city and secure it from terrorist organizations in the future. The anti-terrorism forces that were assigned to enter the city began their infiltration from the north and south May 31. They cleansed a few suburbs around the city June 1 and are gradually advancing toward the center.

Fallujah has been one of the areas most resistant to political change in Iraq since the fall of the Baathist regime in 2003. It was a main stronghold of the Baathist Party; a large number of the party’s officers hailed from there. Several clashes between jihadi factions and US forces occurred in the city from 2003 to 2008. Based on that, Fallujah is very symbolic for these factions.

It was the first city seized by al-Qaeda in 2004 and the first to be held by the Islamic State (IS) in 2014. IS had taped several video segments in Fallujah showing elderly tribal leaders pledging allegiance to the organization, and showing IS militants killing and crucifying Iraqi soldiers they had detained. Based on this history, it would be no exaggeration to say that Fallujah is Iraq's jihadi capital.

The city is of twofold significance due to its strategic location. It is less than 70 kilometers (43 miles) from Baghdad, and the majority of the inhabitants of the nearby areas in the capital are Sunnis. This has made it a central location from which to disseminate chaos in Baghdad and provide support to the ongoing suicide bombings and car bombs in the capital. In addition, it is near important Shiite cities, such as Karbala and Hillah, allowing Salafi jihadis to provoke Shiites and pose a threat to their holy sites.

Given its location and the aforementioned factors, the Iraqi military command developed a masterful plan to liberate Fallujah quickly and without major losses. After IS suffered attrition due to the almost yearlong siege on the city, various government-backed forces — the army, the Popular Mobilization Units and Sunni tribes — were mobilized. The issue seems perfect from a military point of view. Yet the government has not prepared itself for the post-liberation phase, which is much more important than the liberation itself for some considerations.

First, local government forces must be formed to manage the city’s security. Parliament was supposed to enact a law governing the National Guard, which allows each province to have its own local forces that are affiliated with the Iraqi security forces. The bill was strongly opposed by Shiite parliamentary blocs that viewed it as a prelude to the partition of Iraq. The government must find an acceptable version of this bill to be agreed upon by parliament. This bill would prevent sectarian sensitivities in Sunni hot areas like Fallujah toward the security forces coming in from the Shiite provinces.

The sit-ins staged continuously since April 2012 against the central government in Sunni provinces such as Fallujah demanded that troops affiliated with the central government leave — calling them the Safavid army or the Maliki forces in reference to former Prime Minister Nouri al-Maliki. As a result of these sensitivities, Hadi al-Amiri, a prominent leader of the Popular Mobilization Units, announced May 24 that those forces will not enter Fallujah and will only provide support to military forces from the outskirts of the city.

Second, the government must draw up a comprehensive and fast reconstruction plan for the city, including rebuilding the destroyed buildings, establishing strategic projects, providing job opportunities for local residents and bringing back the displaced to their cities as soon as possible. Reassuring the residents that their future is with the Iraqi state and that they will not face any acts of revenge is a proven method to rebuild trust between the government and the city residents. The government has failed so far to provide adequate support to the previously liberated areas and complete reconstruction projects.

For instance, Salahuddin province Deputy Gov. Amar Hikmat complained May 29 about international organizations' and the government’s failure to fulfill their financial promises to provide support for reconstruction projects in Salahuddin province, most of which was liberated in March 2015.

Third, the Salafi jihadi ideology must be confronted through the support for moderate clerics in the city, such as the head of the Sunni Endowment Department, Sheikh Abdul Latif Al-Hamim, who enjoys relative popularity in Anbar province. It is worth mentioning that Sufism has a historical presence in the city and may be a peaceful alternative for radicalism. On May 30, Abdul Latif al-Hamim met the imams of Fallujah, demanding that they “confront the radical ideology of IS and promote moderate Islam.”

Even though the liberation of the city will be accomplished quickly, preserving this achievement will not be fast.