The Iraqi government is digging a trench to protect Fallujah, but the idea is raising concerns that civilians will end up isolated from the rest of the country. 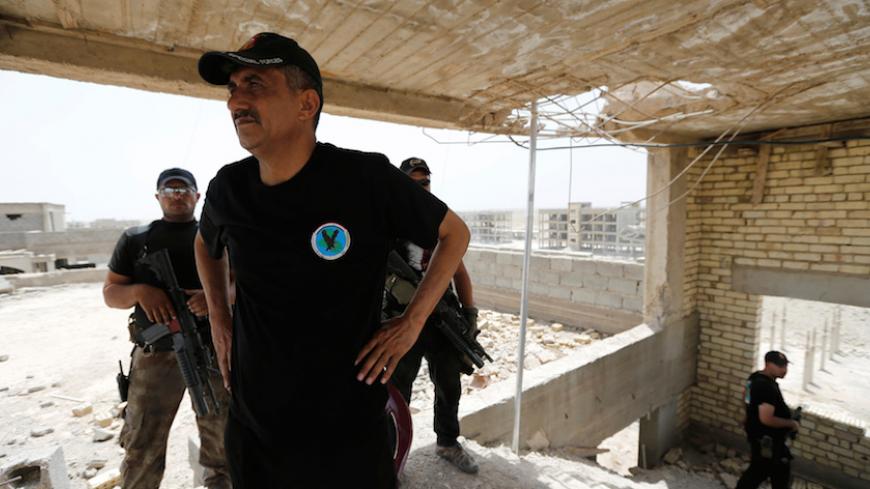 BAGHDAD — Many political and security leaders in Baghdad support digging a trench to insulate the hard-won city of Fallujah from infiltrators. However, those leaders might have to dig themselves out of a hole with the community's residents, who don't like the idea of being restricted.

The leaders blame bombings in Baghdad on the city's proximity to Fallujah in Anbar province. They say car bombs originate from Fallujah, where the cars were booby-trapped. Baghdad is roughly 40 miles (64 kilometers) east of Fallujah.

In response, workers are digging an almost 7-mile (11-kilometer) trench that will have a single crossing for Fallujah residents, according to Lt. Gen. Abdul-Wahab al-Saadi, deputy commander of the counterterrorism forces that led recent operations to liberate Fallujah from the Islamic State. The plan is also designed to prevent ousted IS fighters from returning. Saadi told Al-Monitor by phone July 31 that the trench will run between the Iraqi army's first and fourth divisions for security purposes, and is not intended to isolate residents.

Those residents, who will be issued electronic passes to come and go, still fear being cut off from the rest of Iraq.

Nearly 90,000 people once lived in Fallujah, and most of them have fled to western Baghdad. Security forces believe they need to monitor the displaced and prevent terrorist groups from infiltrating the Fallujah area as people begin to return. But many are wondering how much good a trench will do.

Writer and political analyst Omar al-Hamdani told Al-Monitor, “Of course the security trench ... will not be a solution to maintain security there. It will perhaps be a reason for the people to be angry at the government. Thus, there is a need for the government to work on new plans to preserve security in Fallujah.”

He added, “Trust between the community and government security forces needs to be built in Fallujah. This is the most appropriate solution to create a safe environment in an area that was dominated by terrorism for 13 years. Besides, extremism may return and the gap between the residents and security services may deepen.”

While some of Iraq's parliament members welcome the trench, others reject it. Their opposition or support does not, however, arise from security or social concerns, but rather from political reasons. This conflict could cause a political and social crisis that would intensify accusations that Fallujah residents are extremists who oppose the political system founded after a US-led coalition invaded Iraq in 2003.

The first leg of the trench is underway. That 4-mile (six-kilometer) leg will be north of Fallujah, running from the Euphrates River toward the main road to Baghdad. Fallujah Mayor Issa al-Issawi told Associated Press contributors that work on the 7-mile (11-kilometer) second leg to the south and southeast of the city will begin soon. He also said the entire trench will be about 5 feet (1.5 meters) deep and 40 feet (12 meters) wide.

Maj. Gen. Saad Harbiya, commander of military operations in western Baghdad, told Reuters July 23 that the barrier is “meant to keep forces posted outside Fallujah from entering the city proper, following allegations that homes and public buildings had been looted and burned after the IS defeat.”

While some observers view the trench as a positive step toward keeping terrorists out of Fallujah, Anbar province officials reject the idea, saying it will divide Fallujah's clans and agricultural lands.

Many people aren't convinced or comforted by the concept of a trench maintaining security. In addition to restricting citizens' movement in and out of Fallujah, the trench could be detrimental to the economies of areas in the city with limited access to the crossing. Though the community doesn't like the trench idea, the residents don't want to be accused of collaborating with terrorist groups. Observers say this will most likely prompt them to accept the trench and leave the task of resisting or accepting it to the Anbar government.