The Iraqi army declared that it has gained control of the Jazira area of Khalidiya, but maintaining that control will be a challenge. 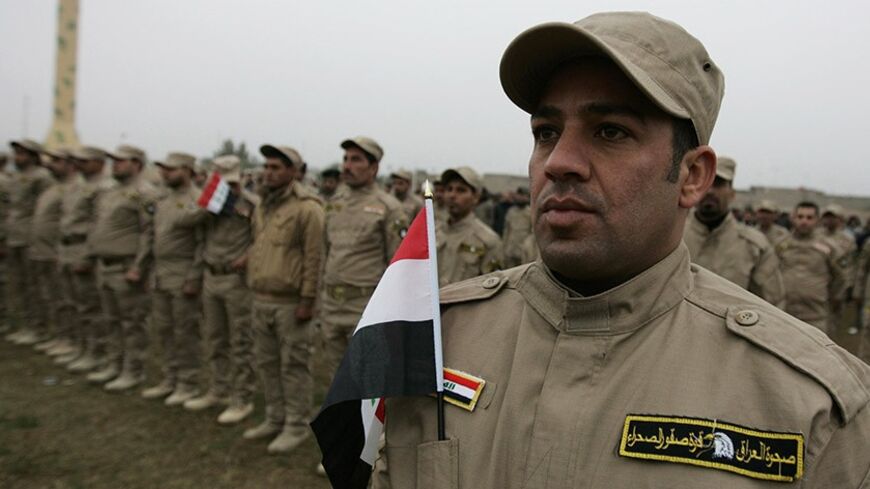 Iraqi volunteers from provinces of central and southern Iraq gather in Karbala to support tribal fighters and Iraqi security forces fighting the Islamic State in Iraq and al-Sham (ISIS) in the desert in Anbar province, Jan. 11, 2014. - REUTERS/Mushtaq Muhammed

The Iraqi army has declared that it gained control over the Jazira area of Khalidiya, which is halfway between Fallujah and Ramadi in Anbar province. With this gain, the army has acquired a strategic point that al-Qaeda has been using for years to maintain its presence and movement in a complex area that extends from Anbar to Salahuddin and Mosul in the north, and to Baghdad and Diyala in the east.

But maintaining control of Khalidiya — which lies on the Euphrates River and includes villages surrounded by agricultural and desert areas stretching south toward the western desert and north toward the Jazira desert in Salahuddin — is not an easy task. Even though al-Qaeda elements have left the area, this does not mean that the government presence there is secure.

The Anbar Operations Command and the Iraqi Interior Ministry confirmed on Jan. 20 that it stormed, with the help of the tribes, the Jazira-Khalidiya area and the town of Albu Bali. They reported that a commander for the Islamic State of Iraq and al-Sham (ISIS) and dozens of fighters were killed in the region and the police stations have reopened.

The course of the Khalidiya battle indicates that the ISIS never intended to stay in the area, despite its strategic importance. The ISIS has kept the Iraqi forces and tribal fighters busy for nearly two weeks in that small area.

This view is supported by information provided by tribal sources from within Fallujah. They said that ISIS fighters poured in on Jan. 15, coming from the area of Khalidiya and neighboring Saqlawiya.

The sources confirmed to Al-Monitor that the distribution of armed groups in Fallujah has changed since that date. According to these sources, on Jan. 13 the tribal military council proposed an initiative to end armed groupings in Fallujah, and armed factions in the city generally agreed to the initiative.

But the sources confirm that ISIS fighters in the city, who had raised the ISIS flag until then, requested 48 hours from the tribes to respond to the initiative, which includes three steps:

1. The withdrawal of fighters from all the armed factions and tribes to either their homes or, for the fighters who came from outside Fallujah, to tribal elders’ guest houses.

2. The local police force taking over security in the city for a month as a trial. During that month, the Iraqi army is not to attack the city.

3. If the month passes peacefully, the Fallujah clans and security forces would provide a safe passage out for all gunmen who came from outside the city. During that period, they would not be pursued or questioned.

The ISIS requested time before responding to the initiative. According to the sources, this coincided with an unprecedented influx of fighters to Fallujah. This influx turned the power balance in favor of ISIS fighters, who are better armed and organized compared with the clans and factions allied with them.

Indeed, a few days later, ISIS leader Abu Bakr al-Baghdadi gave a speech that did not refer directly to the tribes’ initiative. But in essence he rejected it and invited them to cooperate with ISIS fighters and threatened to move the battle to Baghdad and the Shiite cities in the south.

According to the same sources, during those days, al-Qaeda fighters and banners appeared in Fallujah, accompanied by the announcement of new instructions about ISIS laws and courts.

The Fallujah developments explain what happened in Khalidiya. The ISIS could not fight a major battle inside Khalidiya for the following three reasons: it is a small farming town with most houses made of mud, allowing easy monitoring of gunmen’s movements; if most of the population in Khalidiya and Albu Bali flee their homes, the area would become an easy artillery target and a death zone; and if no military force imposes permanent control over the Khalidiya farms, which are bound in by the Euphrates River, it would make the area ideal for movement to and from Fallujah, without being a strategic battle zone.

Unlike Khalidiya, Fallujah, which is closer to Baghdad, represents an ideal battlefield model for the long term. Fallujah's large size and good infrastructure give the gunmen opportunities for maneuver and camouflage. Moreover, the fact that Fallujah has a large number of mosques (about 1,000) gives ISIS fighters religiously protected operation centers, since the military will hesitate before striking a mosque.

But withdrawing from Khalidiya does not mean leaving it to the control of government forces and the Sahwa tribes. In practical terms, government forces will not be able to keep large military units in the region for the same reasons that ISIS cannot keep a large number of fighters there. Also, Khalidiya, which was not very prominent in the 2004 Fallujah war against US forces, has always represented a traditional zone of influence for al-Qaeda elements. That makes any regular force there an easy target for daily attacks.

Pending the developments on the ground in Fallujah — whether a big battle breaks out or the tribes impose a peace initiative — Khalidiya will continue to be a zone of hit-and-run attacks, which the ISIS will use to secure its movement and its main human and military supply routes through Jazira or Salahuddin toward Mosul province, and from there to the Syrian border. The nature of the region makes it an important and long-term area of military concern, but not a battle zone as is the case with Fallujah.