The Islamic State of Iraq and al-Sham (ISIS) is briefly occupying Sunni neighborhoods then immediately withdrawing, to weaken confidence in Iraqi forces and display its power. 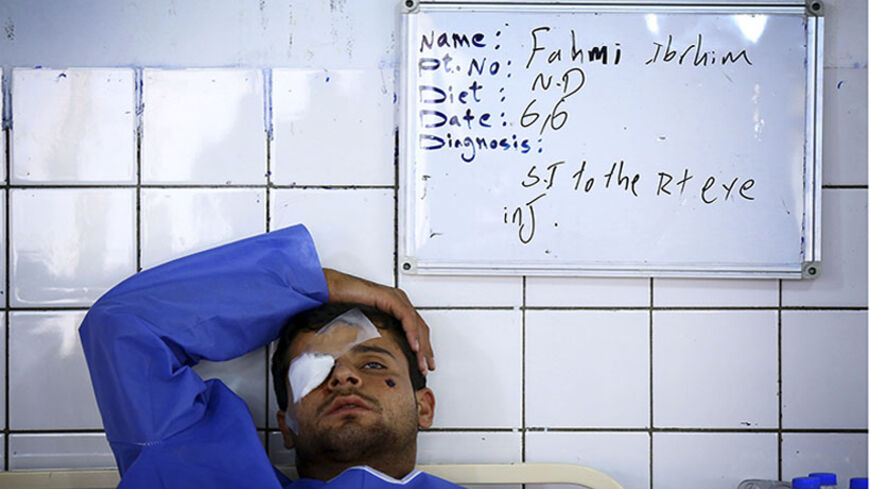 A man, who was wounded during a suicide bomber attack in Mosul, lies in a hospital bed after he was brought for treatment in a hospital in Erbil, June 6, 2014. - REUTERS

Iraqis held their breath on June 5, amid the steady drumbeat of news about the spread of fighters carrying Islamic State of Iraq and al-Sham (ISIS) banners in five Samarra neighborhoods and ISIS being engaged in fierce battles with Iraqi security forces.

The reason for the concern is that Iraqis have associated the city of Samarra with the Iraqi “civil war” (2006-2008) after al-Qaeda blew up the Askari shrine in the city in February 2006.

But the matter didn’t stop with Samarra, from which the gunmen withdrew in the same way they entered. ISIS also made a strong appearance in Mosul the next day and occupied whole neighborhoods.

The next day, about 20 ISIS gunmen occupied the building of Anbar University. On the same night, ISIS carried out a series of bombings via explosives-laden cars and improvised explosive devices in Baghdad, leaving dozens of dead and wounded.

ISIS is still present in Anbar province and is fighting in Fallujah. A few days ago, ISIS conducted a significant operation by assassinating Mohammed Khamis Abu Risha, who was one of the most prominent leaders of the tribal groups fighting ISIS in Anbar in cooperation with the Iraqi government.

Such operations by ISIS raise big question marks about the implications and the messages that the organization wants to send in Samarra, Mosul and Baghdad, and about its ability to invade cities that are large as well as geographically and demographically complex.

Less than 24 hours after the ISIS operations started in Samarra, Iraqi government forces announced that they expelled the last elements of the group from the city.

Of course, the presence of armed ISIS fighters in cities around Baghdad, and in Diyala and Kirkuk, is now taken for granted in light of the operations that took place over the past months in these cities and included an attempt to control whole villages and neighborhoods like Buhriz, Sulaiman Bek, Dhuluiya and Iskandaria.

On March 13, Al-Monitor analyzed the behavior of ISIS and its desire to export Fallujah’s experience to include other cities near Baghdad and north of it, in light of the inability of the security forces to resolve the battle by military force and the government’s reluctance to reach comprehensive understandings with local tribes to prevent ISIS from attracting those tribes.

The Samarra and Mosul operations are part of the same strategic context that happened in other areas: ISIS is proving its ability to occupy and withdraw from entire cities. It has repeated that scenario and the objective is twofold: (1) to degrade the security capabilities in these cities, to widen the gaps there, and to openly intermingle with the local population, especially ISIS sympathizers or those predisposed to being sympathetic to ISIS, to push them to revolt against the government, and, (2) to weaken confidence in the government’s security services, which seem to be receiving constant blows and reacting to, not pre-empting, ISIS actions.

It is interesting that the information that ISIS might conduct major military operations in Samarra (Salahuddin) and Mosul wasn’t based on analysis, but on intelligence information.

On May 31, an Iraqi special forces officer was quoted as saying, “ISIS elements in Fallujah and in Salahuddin, Mosul and Diyala provinces are preparing to carry out attacks on security forces in these cities to scatter the army’s efforts in Anbar.”

A few days ago, the Iraqi security forces sent reinforcements to these cities because of similar information.

All these facts make the latest movements by ISIS expected; so are the reactions that accompanied the attack.

In Samarra, the talk that ISIS controlled the neighborhoods of Jubairiyya, Shuhada, Armoushia, Khadra, Mualimin and Dubbat, all of which are in eastern Samarra, caused fears that the Askari shrine might be bombed again. Thus, an unknown Shiite armed militia asserted that it would respond strongly if there were an attack on the shrine, which Iraqi Shiites hold sacred.

On the other hand, the Sunni al-Arabiya bloc, headed by Deputy Prime Minister Saleh al-Mutlaq, accused the government of opening the way for the entry of militants into Samarra to have a pretext to bomb the city and “hand it over to a certain sect.”

In truth, all of the June 5 events in Samarra and on the days that followed were linked to the ability of ISIS to open multiple fronts and that ISIS had weapons and equipment, as witnesses from inside Samarra had said.

An eyewitness told Al-Monitor that the militants suddenly appeared in the Jubairiyya neighborhood in northeast Samarra and that they came from the al-Jalam desert, which is geographically linked from the east to the Hamrin Mountains and the villages of Sulaiman Bek, Tuz Khormato, Azim and Hawija, and that the last months have seen noticeable ISIS activity.

The eyewitness asserted that the militants, using bulldozers, removed a sand barrier made to separate Samarra from the al-Jalam desert. The sand barrier was constructed by US forces when they were in Iraq because al-Jalam was an infiltration route for gunmen into the city.

It was interesting that ISIS took control of al-Jalam desert over the past months. An officer in Samarra told Al-Monitor that the desert was inhabited by some tribes that lived on grazing sheep and some seasonal crops. Shamel al-Wahib, the tribal leader of the al-Rifai clan, was kidnapped with a number of his sons and some clan members for unknown reasons. He lived in that desert and there has been no trace of them so far.

But the information available to the security services about the kidnapping of Wahib (also known as Sheikh al-Jalam) confirmed to Al-Monitor that he was kidnapped because he refused to cooperate with ISIS to control the desert and monitor the movement of Iraqi forces there.

The ISIS attack on Samarra didn’t happen from areas west of the city, areas that are geographically linked to Anbar and Fallujah and are considered loose security zones. Rather, ISIS chose a difficult route that Iraqi security forces weren’t paying attention to, as evidenced by how easily the attackers controlled the Jalam sand barrier and moved to the neighborhoods of Jubairiyya, Dubbat and others, before they withdrew 12 hours later to Jalam. ISIS withdrew after the security forces managed to gather their forces as a prelude to break into those neighborhoods and after the air force got involved in the battle.

Eyewitnesses in the neighborhood of Dhuluiya, north of Baghdad, as well as Iraqi security sources, told Al-Monitor that the plan to control Samarra included blocking the arrival of military supplies to the Iraqi army and SWAT forces in the areas north of Baghdad, where military convoys were subject to intense attacks that prevented them from moving toward Samarra for hours.

ISIS stayed for half a day in Samarra and raised the ISIS banner there. The group’s members fought minor battles, then withdrew. That scenario may have been a carbon copy of the occupation of the town of Buhriz in Diyala province on March 21.

ISIS certainly didn’t intend to stay in Samarra, but rather wanted to showcase its ability to occupy and withdraw from an area for the longest possible period of time and with minimal losses.

But that tactic wasn’t applied to Mosul’s neighborhoods, which have dense and overlapping populations. ISIS fighters stayed in the neighborhoods of al-Askari and “July 17” west of the city and fought battles there.

In conclusion, ISIS has started a new phase in its movements. ISIS is paving the way to impose its presence on Sunni cities as a fait accompli by attacking and occupying major cities, and this method may be heavily repeated in the weeks and months ahead. ISIS wants to prove its ability to move around, transport fighters and manage complex operations on different fronts and amid various security circumstances.