ISIS expands in areas around Baghdad

Witnesses report that the Islamic State of Iraq and al-Sham (ISIS) has been entering cities surrounding Baghdad, raising al-Qaeda flags and leaving before the arrival of security forces. 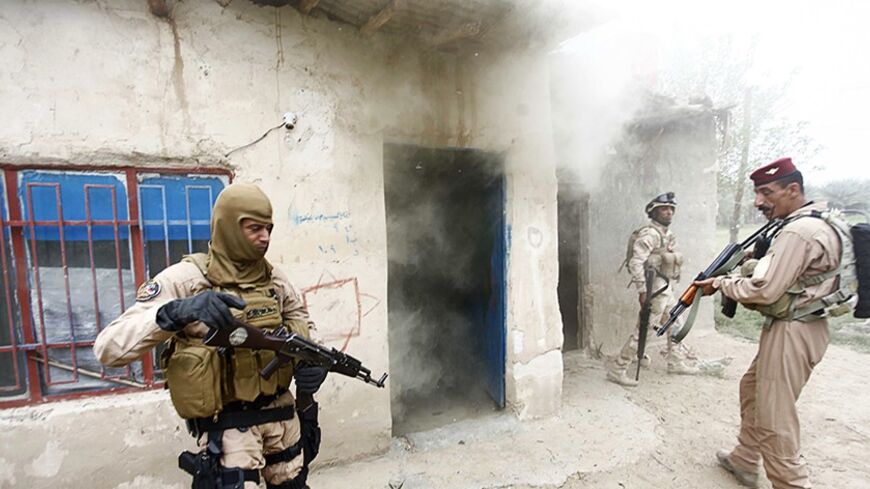 The Islamic State of Iraq and al-Sham (ISIS) has expanded its activity in the areas surrounding Baghdad, making public appearances in the region of Buhriz in the Diyala province (east of Baghdad) and in Nibai (north of Baghdad) in an effort to clamp down on the capital and to transfer the battle from Fallujah to new regions.

Security sources told Al-Monitor that Qara Tapa in Baquba has recently been added to the list of areas chosen by ISIS to organize a media appearance. Towns like Sulaiman Bek, al-Azim and Muqdadiyah in the east and north of the Babil province have witnessed similar appearances. This raises questions about the goals of ISIS and the responses of the Iraqi security forces, specifically in relation to the way ISIS emerged in these towns and then withdrew.

Residents of the Nibai area, located north of Baghdad, witnessed the same scenario. They told Al-Monitor that, on March 25, the gunmen entered, took control of the town, hoisted the flag of al-Qaeda and then withdrew.

In an attempt to establish a link between the behaviors of these fighters, who are likely to be moving between these towns, it should be noted that the technique by which the town of Sulaiman Bek fell in the middle of February was very similar.

But what is the purpose of these fast battles that are often limited to mere hours? Especially given that ISIS fighters are capable, should they want to, of fighting bigger battles, fortifying themselves in these towns or taking their residents as hostages. Why didn’t they do that?

According to the information Al-Monitor received from Buhriz, nothing suggests that the fighters who raised the ISIS flag fought battles with security forces within the town. Witnesses, however, say that the fighters withdrew as the Iraqi army forces started to move toward the town.

Witnesses, including the well-known poet Ibrahim al-Bahrazi, confirmed that militias wearing civilian clothes entered the town of Buhriz and killed 40 residents, including relatives of the poet. Other reports described the summary execution of 27 inhabitants.

For his part, religious leader Muqtada al-Sadr denied having anything to do with the militias in a March 26 statement. The militias that were reportedly involved in the storming of Buhriz had raised pictures of Sadr.

The Mutahidoun bloc, led by parliament speaker Osama al-Nujaifi, issued a statement on March 26 condemning the militias’ killings in Buhriz, the demolition of houses and the burning of mosques.

Amid this controversy, security forces categorically denied reports alleging that militias entered Buhriz with them. Notwithstanding these statements, the sectarian ambiguities that accompanied the Buhriz issue offered a great service to ISIS, more significant than any benefit attained from going to war with this town, as happened in Fallujah.

ISIS is not attempting — at least at this stage — to bring down cities and control them for long periods of time. It is actually more focused on sparking confusions, adding such incidents to the list of resident complaints about the behavior of security forces.

Fallujah has proven something that ISIS may have understood before the Iraqi authorities — that big cities like Fallujah cannot fall without the participation of residents and clans. According to ISIS’ logic, Buhriz is not ready to fight a battle and turn into a new Fallujah, as its residents are still not ready to rebel against the state. This applies to other areas in which al-Qaeda fighters are entering and then leaving before the arrival of government forces.

But the unwillingness of the residents to enter into these battles is not necessarily absolute. Sectarian events and circumstances similar to those in Buhriz are capable of changing people's stances. Should this happen, ISIS would deem it a strategic progress, or perhaps a “gift” offered by the militias or the “state.”