After successfully breaking the Islamic State’s siege on the Shiite Turkmen town of Amerli, Iraqi forces are looking to make further advances. 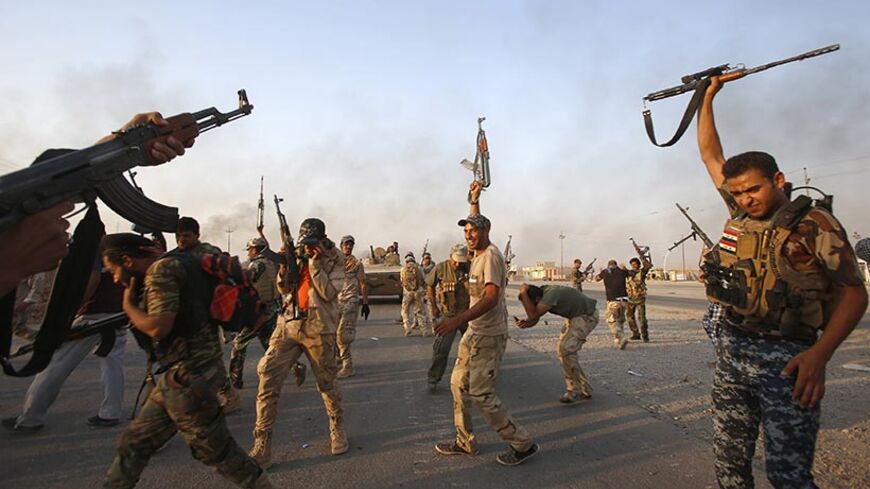 AMERLI, Iraq — Thick black smoke rose from some of the houses in the distance. The rocket and bullet casings lying by the side of the highway attested to the fight for control over the area. Young Shiite men armed with a variety of weapons, including rocket-propelled grenades, manned makeshift checkpoints along the road to the “liberated” town of Amerli. Such was the scene that greeted visitors arriving in the vicinity of Amerli and Sulaiman Bag, in the northern part of Salahuddin province, some 180 kilometers (112 miles) north of Baghdad.

At the entrance to Amerli, children waved Shiite flags at the vehicles entering their dilapidated town. It was a genuine expression of joy at having survived what would have surely been a brutal fate if the fighters of the Islamic State (IS) had succeeded in setting foot in this town populated by Shiite Turkmen.

Armed men affiliated with a number of Shiite groups — some wearing camouflaged military uniforms and others black fatigues — roamed the streets hoisting the flags of their respective organizations on their vehicles, many of which did not have license plates. Among the groups that helped take Amerli were the Badr Brigades, the League of the Righteous, Hezbollah Battalions and Peace Brigades. It was at times difficult to tell who was who. Military humvees provided by the US government to the Iraqi army carried Iraqi and armed groups’ flags.

Fighters from the Hezbollah Battalions set up base at a building formerly used by the government's office of agriculture. The group, whose flag bears striking similarities to Lebanese Hezbollah's banner, once fought both the US military and Iraqi security forces, but has joined forces with the army and other Shiite armed factions to fight their common enemy: Sunni extremists. The men, visibly tired by the fight, rejoiced in their victory over IS, a rare occurrence in the bloody conflict between the Sunni jihadists and the Iraqi army and allied Shiite forces.

“The people of Amerli have implanted fear in the heart of IS,” said Abu Abdullah, a tall, thin man with a blonde beard wearing military fatigues. “Amerli and its surroundings are now free of terrorists.”

Some of the men here were involved in the successful Aug. 31 assault on Amerli by Shiite armed groups, Iraqi army and Kurdish peshmerga forces that broke the IS siege of some 80 days. Others were part of the resistance inside Amerli. Less than 48 hours after the siege was lifted, no traces were left of peshmerga inside the town. The closest peshmerga post was a checkpoint on the road connecting Tuz Khormato to Sulaiman Bag, several miles away.

The residents of Amerli still appear traumatized from the siege, which was intended to break their resolve and force them into surrendering or starving to death. They call what unfolded a “heroic resistance” and are proud of not having blinked in the face of what they described as a 360-degree siege.

“We were badly short of food and medicine, drank dirty water from the wells and were shelled all the time,” said Sheikh Abbas al-Amerli, a local tribal chief who, like many residents, took up arms to defend his town. “But we did not surrender. We defended our honor.” The fighters denied that aid delivered by the Iraqi military to the town during the siege included military supplies.

Exact figures are not available, but staff at a rundown health center said that several pregnant women and their babies died because of a lack of doctors, medicine and supplies to ease their deliveries. Those who died during the siege were laid to rest in unmarked graves, no more than a pile of earth, in a cemetery on the edge of town.

Truck after truck have been entering the town of nearly 15,000 people to deliver assistance, including much-needed flour for bread, bottled water, which one resident described as a “luxury,” and packaged food. Many of the trucks had flags from Shiite armed groups, and their contents were distributed by armed men. At least four trucks from the Turkish Red Crescent were idle at the entrance of the town shortly before sunset, waiting to be allowed in to distribute their cargo.

Shiite armed men openly boasted of burning the houses of those who cooperated with IS in the nearby village of al-Habash and the district of Sulaiman Bag, both of which have a significant number of Sunni residents. The locals who worked with IS apparently left with the retreating jihadists. At the entrance to Sulaiman Bag and al-Habash, men at the checkpoints warned visitors to be careful because of possible roadside bombs and not to veer off onto unpaved roads.

The fight in Amerli might be over, but the Shiite groups here plan to march farther. “We cleansed three villages of IS terrorists today,” said Adnan, a militiaman from the nearby town of Tuz Khormato who came to Amerli with the Peace Brigades, which are affiliated with cleric Muqtada al-Sadr. “We will not stop until we have cleaned up all surrounding villages and will then go to Mosul.”

The battle for Mosul might not happen anytime soon, for IS has proven capable of slowing if not bogging down its enemies on different fronts. Regardless, armed Shiite groups, reinvigorated by their most dramatic success in the conflict thus far, are yearning to charge ahead.

At least one person, however, had reason to be unenthusiastic about events that transpired in Amerli, although not for the obvious reason. One pale-looking boy wearing an FC Barcelona jersey said he was saddened because he had been unable to watch the Catalan team's matches. “We didn’t have electricity,” said Salam, 11, in a feeble voice. The boy then rushed away to collect some ice after spotting a truck pulling over to deliver aid to residents.