Iraqi Prime Minister Nouri al-Maliki recently called for a conference to solve the Anbar crisis, which might be futile if the tribal and political differences are not settled first. 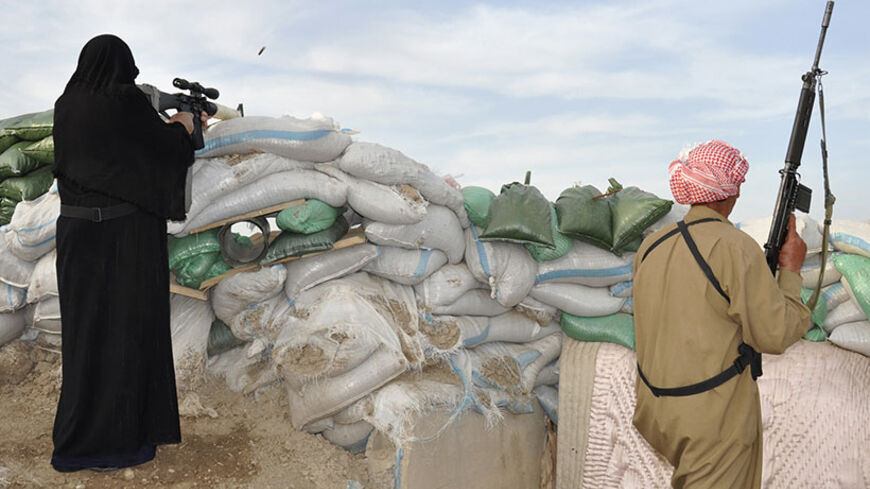 A Ramadi resident fighting alongside tribal fighters fires her rifle during clashes with the al Qaeda-linked Islamic State of Iraq and al-Sham (ISIS) in Ramadi, May 19, 2014. - REUTERS

Iraqi Prime Minister Nouri al-Maliki’s call on May 28 for holding a conference to resolve the Anbar crisis did not come as a surprise. However, the residents of Anbar felt that this call came late.

In his weekly speech, Maliki called on “Anbar tribes and all those who confronted al-Qaeda and Islamic State of Iraq and al-Sham (ISIS) militants to attend an expanded conference that achieves national unity far from disputes.”

“I call on all people and tribes, who find enough will, awareness and ability in their hearts to support those who carried arms, issued fatwas to fight al-Qaeda, and joined the army and police, to hold an expanded conference as soon as possible. The conference will aim at declaring national unity in Anbar, to get rid of al-Qaeda. I hope that we will not bring up the disputes, although we respect them and we will work on resolving them. However, we want the citizens to return to their homes for the month of Ramadan,” Maliki said.

This call was immediately met with conflicting reactions from Anbar and other regions. Some welcomed it, especially the governmental parties in Anbar, while the Sunni Mutahidoun bloc said the conference would turn into merely a stage for speeches, and doubted its goals and results.

Ali al-Allak, a leader in Maliki’s State of Law Coalition, accused those doubting the conference of being “losers.”

Sheikh Mohammad al-Bajari, an influential tribal leader in Fallujah, told Al-Monitor, “Maliki’s call for holding this conference came too late. He should have called for it when we were peacefully staging a sit-in in the desert, before things evolved.”

“Fallujah and Anbar sheikhs and tribes do not trust the government and the conference’s intentions. If there is indeed a desire to solve the crisis in Anbar, the government will have to show good will. For instance, it should stop the shelling on Fallujah and several other regions, withdraw the army from the cities and hand in the people implicated in the murder of the innocent to the courts,” he added.

Far from the political tensions surrounding the conference, the Iraqi government acknowledged that it was important for the political, security and military courses of action to go hand in hand, rather than separately, to solve the Anbar crisis. This is a development in itself, late as it might be.

Perhaps the debate about Maliki’s late invitation to hold the conference, 18 months after the outbreak of protests in Sunni cities, and five months after the outbreak of bloody confrontations following the Iraqi army’s raid into the Anbar sit-in square late 2013, is not as effective as the different parties investing in a positive environment to reach a final solution to the crisis.

On that note, a member of the local government in Anbar, Yahya al-Muhammadi, said, “Maliki’s call for holding a special conference to address the crisis in the province was timely, and the [local government] council agrees with him that it is very important to let dialogue prevail among Anbar’s social categories and to unite efforts to fight ISIS.”

However, it is more important to talk about the approach to holding the conference and the best ways for it to be fruitful, rather than focus on the timing controversy.

The Iraqi government had indeed opened the doors for dialogue with representatives of opposing tribes in Fallujah. Meetings were held with Sheikh Ali Hatem of the Dulaimi tribe in the Jordanian capital first, then in Erbil.

A well-informed source told Al-Monitor that the dialogues that took place between both sides focused on “withdrawing the army from the cities of Anbar, compensating those affected by the military operations, creating a special force consisting of tribes to protect the city until the security and administrative services are restructured in the province, and offering amnesty to militants that do not belong to ISIS. The government officials also insisted on the need for the tribes in the city of Fallujah in particular, to expel the ISIS militants through internal military confrontations.”

However, there is a major obstacle to the framework of the negotiations, as the crisis has dragged on and the trenches of ISIS militants, tribes and armed groups have become closely intertwined, to the extent that it has become hard to sort out extremists from other fighters in the battlefield, especially since both sides have been cooperating with one another during the past few months.

Sources in Fallujah confirmed to Al-Monitor that the tribal fighters and other armed groups do not want to fight ISIS in this phase, as they prefer a solution that would allow finding safe corridors for the safe withdrawal of ISIS from Fallujah, in conjunction with the withdrawal of the army.

In this central issue, one can clearly notice the great divide that occurred since the outbreak of clashes between the clans of Fallujah and some other areas in Anbar, the tribes of Ramadi, including the clans of Abu Risha and Abu Fahd, whose leaders joined the army in its fight against al-Qaeda. They reformed tribal forces for this purpose and it seemed that five months into the battles, they were still unable to achieve the goals they set of expelling ISIS from all the cities of Ramadi, which continue to shelter ISIS militants in some of its areas.

It should be noted that the sit-in in the Anbar squares included all the major tribes, before the division took place as a result of the outbreak of clashes and the arrival of ISIS to the cities of Anbar and its settling in Fallujah.

The division resulted in a massive fight among the leaders of the major tribes, not to mention the mutual accusations of collaboration with al-Qaeda, treason and spying and the attempts to make gains at the expense of people’s suffering.

The fact of the matter is that the internal conflict in Anbar, whether at the political or tribal level, places major obstacles along the path to a solution. Moreover, the conflict of interests between these sides was deepened by the policies adopted by the Iraqi government to manage the crisis.

In his May 28 speech, Maliki spoke of respecting different opponents, and of putting an end to the Anbar crisis through the conference, which was a clear indication of the government’s reneging on pathways that have not been suitable to manage the crisis during the last months.

The classification of the tribal leaders based on their loyalty to the government or to ISIS was futile, and resulted in further firm stances by the opposing groups. Indeed, these groups have become closer to ISIS to face any possible reprisals on the part of the government or the tribes that are close to it. The government should have worked on bridging the gap between the clans to ensure a unified position.

The talk about an efficient conference to solve the crisis of Anbar requires first and foremost working on reducing tribal and political differences, especially between Fallujah and Anbar. Without this required convergence of opinion between the concerned parties, the conference’s chances of success will remain slim.

Based on this, the criteria that will determine the participants in the conference are important. For the conference to be a success, there ought to be ample space for the participation of the figures that are at loggerheads with the government and who have an influence on the progress of the crisis, in addition to fighters who are not affiliated with ISIS. An inclusive approach to the conference, involving all of the relevant players who hold sway on the ground, would provide the best prospect for a resolution of the Anbar crisis.