Local leaders in Anbar seek a local solution to the current crisis. 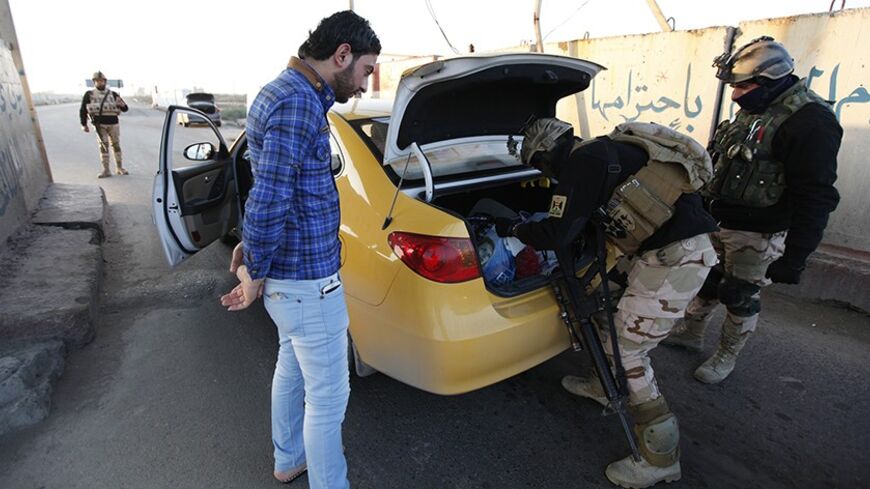 Iraqi security forces, backed by air support, are continuing their wide-scale military operations against al-Qaeda strongholds in the desert areas of Anbar province extending to the Syrian and Jordanian borders.

Iraqi Prime Minister Nouri al-Maliki on Jan. 6 called on the residents and tribes of Fallujah, which had fallen under al-Qaeda's control, to expel the “terrorists” from their city to avoid “armed confrontations” in the streets. Meanwhile, the clans and dignitaries in Anbar are insisting on the withdrawal of the Iraqi army from the province’s cities and reliance instead on tribal militants and local police to rid them of al-Qaeda.

An Anbari official told Al-Monitor, “The [Anbar Provincial] Council held an emergency meeting on Monday [Jan. 6] to demand that Maliki investigate, [in coordination] with Deputy Interior Minister Adnan al-Asadi and Anbar Police Chief Hadi Rseg, the security chaos gripping the province.” The official, who spoke on condition of anonymity, added, “The council also demanded that Maliki withdraw military forces from Anbar immediately to avoid the bloodshed of innocent people.”

Meanwhile, the head of the tribal council in Anbar, Abdul Rahman al-Zobaie from Ramadi, told Al-Monitor, “The army ought to stop the indiscriminate shelling of civilian houses.” He noted, “This has killed and injured hundreds of civilians and destroyed a large number of houses. The government of Anbar ought to expedite measures to meet the needs of the affected families.”

Zobaie said, “Local police forces are deployed at the entrance of the city, and checkpoints have been established in all areas in Fallujah, [and are] working on protecting the governmental institutions with the support of the tribes. There are no members affiliated with the Islamic State of Iraq and al-Sham [ISIS] as propagated by some politicians and the government of Anbar.”

He added, “The government of Fallujah, with all its tribal sheikhs and dignitaries, are demanding that the central government and the armed forces stop the indiscriminate shelling of residential areas and withdraw the armed forces, as the [local] police are the only party responsible for managing the crisis.”

Business hours in most of the state institutions, schools and colleges in Anbar continue to be disrupted, but the power is back in some areas, according to one local source. The army, which controls entrances to the province, has allowed fuel trucks into the center of Ramadi to unload their cargo.

There is no clear picture of the armed factions fighting in Anbar, because the organizations overlap. In addition, while the army declared that it is only fighting against al-Qaeda, some reports assert that a number of tribes have joined al-Qaeda's ranks and refer to the formation of a “military council.”  It has been alleged that this council includes a number of tribal volunteers and seven armed groups along the lines of or possibly including the 1920 Revolution Brigade, the Mujahedeen Army, the Islamic Army and the Naqshbandi Army.

While some tribal elements such as the supporters of Sheikh Ahmed Abu Risha have decided to fight alongside government forces, others are fighting against the Baghdad government as well as ISIS.

It appears that the Maliki government is receiving outside assistance in its fight against al-Qaeda. On Jan. 6, US Secretary of State John Kerry stressed that the United States would aid Iraqi authorities in their struggle against al-Qaeda and affiliated militants in Anbar. That same day, the Iranian deputy head of the general staff, Gen. Mohammad Hejazi, said that Tehran was ready to offer Iraq advice and military equipment.