The Islamic State will continue to move freely in Anbar province until Iraqi political parties agree on a joint force composed of the army and the Popular Mobilization Units, to lead the battles for the liberation of Anbar. 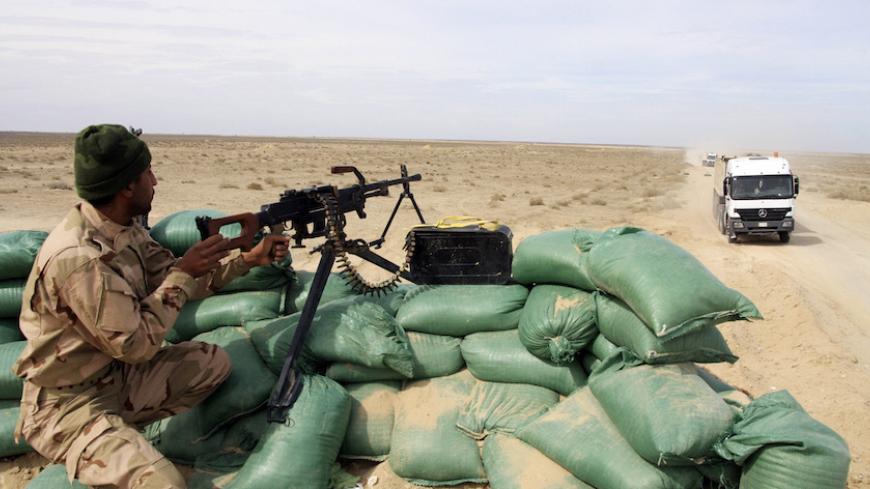 A member of the Iraqi security forces takes up position with his weapon in the desert between Anbar and Karbala, Feb. 24, 2015. - REUTERS/Mushtaq Muhammed

More than a year has passed since the Islamic State (IS) occupied six major towns in Anbar, stretching from Qaim to Rutbah, Anah to Rawa and Hit to Fallujah. Over the last two months and up until today, it has simultaneously opened six new fronts, including in Haditha, central Ramadi, Tharthar, al-Amiriyah, al-Karmah and al-Baghdadi, to complete its occupation of the whole of Anbar province.

The ignition of the Anbar front is a direct attempt by IS to make up for its defeat in Tikrit, but it was no surprise, particularly since Anbar has always been an open, vast and ideal geographic arena for extremist organizations over the past years. Anbar was the stronghold of al-Qaeda and a large number of armed factions, such as the Islamic Army in Iraq (AIA), the Mujahedeen Army and Hamas in Iraq. The province witnessed major military operations during the US occupation (2003-12).

The map of IS-controlled areas in Anbar, which overlap with areas that it has not controlled, is based on the nature of tribal division there. It is also based on Iraqi forces’ positions they are committed to defending. Over the past year, the Iraqi forces did not completely abandon their positions, despite the intensive offensives launched by IS in Anbar.

The Iraqi forces were able to keep on holding the military bases in al-Baghdadi and Habaniyah, the Anbar city center and the Haditha district. On Feb. 26, 2014, IS launched a wide-scale attack to occupy al-Baghdadi base, but the army was able to stop the organization. On March 22, 2015, the army foiled an attack launched against Haditha, which IS tried to occupy on Oct. 10, 2014. The organization also failed there. On Dec. 28, 2014, and on Feb. 26 and March 11 of this year, IS also tried to occupy the city of Ramadi and oust the local government, but also failed.

Since Jan. 1, 2014, IS has been in control of Qaim city, which is located in far northwestern Anbar province. At the same time, it has controlled Fallujah city in far eastern Anbar, and announced Aug. 31 that the two cities had become two independent IS wilayat (states). The cities’ demographic composition helped IS in its quest, as the tribal impact is weak and the religious one transcends, making the environment more divided and thus favorable for IS.

Yet, IS has not been able to resolve the battle in Ramadi up until now, which is the capital and administrative center of Anbar, due to the powerful tribal impact there, and the presence of a formal force positioned in the city center. This is added to IS’ failure — despite its numerous attempts — to control the town of Haditha, where there is a tribal environment opposing it and a military regime force protecting the Haditha Dam.

Despite IS’ ongoing attempts to subdue the towns of al-Karmah northeast of Fallujah, al-Amiriyah southeast of Fallujah, and Tharthar north of Fallujah, it has failed to take full control of them, given the presence of a large formal military force in April 2015 — which includes the army, the Popular Mobilization Units and some tribes that are allied with the army — tasked with protecting Baghdad’s western periphery — which is linked to Anbar — from IS expansion.

IS’ ability to continuously move in Anbar lies in the complex desert surrounding the scattered cities of Anbar on the Euphrates River, and its success in investing tribal divisions to guarantee various tribal allegiances. IS, and before it al-Qaeda, established local tribal alliances. The organization focuses on the allegiances of tribes, and has shown videos of some tribes swearing allegiance to IS in Qaim and Mosul.

Yet, IS alone is not behind the tribal divisions. The tribes have deep historical roots and differences that have significantly escalated following the 2003 occupation of Iraq. This is when tribal divisions emerged about the way to deal with the new reality, represented by the new regime and Shiites taking over power in 2006. The emergence of the Sahwa groups in 2006, which defeated IS in Anbar between 2006 and 2008, and the confusing position toward the government of former Prime Minister Nouri al-Maliki (2006-14) have resulted in new divisions.

Nevertheless, the tribes that are not allied with IS in the mentioned fronts have launched continuous distress calls since January 2014 — when IS took occupied Fallujah, and later on took control over large parts of Iraq after June 2014 — for the Iraqi government to arm them to defend themselves from IS. The tribes also blamed the governments of Haider al-Abadi and Maliki for the recent security breakdowns in Anbar, because of its lack of trust in the tribes and because they did not provide the tribes with the necessary aid, mainly weapons.

Yet, Iraq’s Interior Minister Mohammed al-Ghabban, who admits that the Anbar fronts are complex, does not consider that the government's failure to arm the tribes is behind IS’ expansion.

Ghabban told Al-Monitor that the Maliki government had armed the Anbar tribes on different occasions, but that the problem lies in the will to fight IS and in organizing the ranks of the province's residents into a single force capable of facing the enemy.

“Internal and external reasons are behind the disagreement among the Anbar residents. There are also regional agendas; there are those who are trying to take advantage of the extraordinary conditions to work according to agendas that serve the interests of regional countries, and there are those who respond and act as a tool for these agendas,” Ghabban said.

He added, “IS usually tries to take advantage of abnormal conditions — most recently the displacement that took place in Anbar — to have its members enter Baghdad. For this reason, we are concerned about IS’ attempt to cause large displacement campaigns and send its members to Baghdad. This justifies some of the security measures that accompanied the entry of the displaced families to the capital, although we understand the difficult conditions that afflict the people."

On the controversy about the local government operation to liberate Anbar, which was launched April 9 but was lately shown not to be serious given the incomplete preparations, Ghabban said, “Honestly, following the liberation of Tikrit, the Iraqi forces had to secure the western front of Baghdad. Yet, announcing the zero hour for these operations was not successful, and was not part of the military contexts.”

The fact is that there are several reasons for the security unrest in Anbar, including the political aspect of the crisis. There are disagreements in Baghdad over the military force that will be tasked with the battles in Anbar, and there is a controversy over the participation of the Popular Mobilization Units or some of their units.

The political controversy is linked to frequent talks in the media about a US veto regarding the participation of the Popular Mobilization Units. Meanwhile, a political dispute between the Sunnis, who reject the Popular Mobilization Units’ participation, and Shiites who call for their participation in the liberation battle, is taking place, as the military force that the United States has been training of Anbar residents for months now remains unprepared.

Iraq’s Defense Minister Khaled al-Obeidi announced April 26 that his troops succeeded in repelling the recent IS attacks in Tharthar, al-Karmah, al-Amiriyah, as well as al-Baghdadi and Ramadi, and accused “political parties” — which he did not identify — of calling on army soldiers to lay down their weapons.

Yet, the Iraqi army's ability to fight the Anbar battle continues to be questioned in Iraqi decision-making centers. Leaders of the Popular Mobilization Units said April 26 that the political rejection of these forces’ participation in the Anbar operations has helped IS control vast areas of Anbar, adding that had the Popular Mobilization Units been present in these areas, IS would not have occupied them.

The ongoing controversy over which force will be entrusted with the battle to liberate Anbar means that the arena will be left open for IS until the Iraqi political units agree on a way to ensure the participation of Anbar residents in the liberation of their areas, with the support of the army and the Popular Mobilization Units, as well as US air cover.