The Iraqi government’s announcement of the Anbar battle will allow the Iraqi forces to liberate Fallujah, and then Ramadi, as long as they are not trapped in the war of attrition waged by the Islamic State. 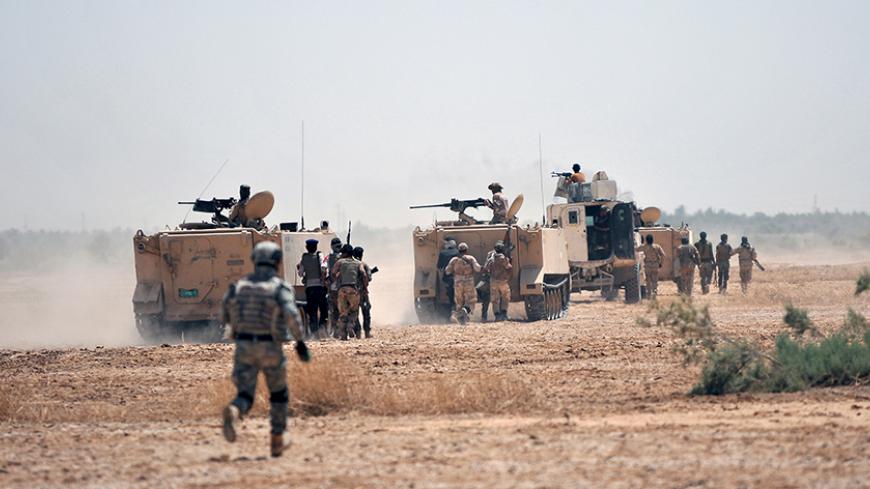 On July 13, Iraqi authorities announced the launch of the battle to liberate Anbar province — the biggest Iraqi province in terms of surface — from the Islamic State’s (IS) grip, with the participation of the police, the army, the Popular Mobilization Units and tribal fighters.

The city of Fallujah has been under IS control since Jan. 1, 2014, and according to Iraqi security sources, it is the military operation’s main objective. Iraqi forces slowly advanced July 14 toward the city and besieged it in an attempt to cut off all of IS’ supplies into the city, which has also been under continuous shelling by the security forces and the Popular Mobilization Units.

Al-Monitor had reported in an article published July 9 that regaining Fallujah from IS would undermine the group’s ability to threaten Baghdad. However, liberating the city could only happen through efforts deployed by the Iraqi state in cooperation with the Sunni population in Fallujah.

On Oct. 16, 2014, Al-Monitor published, “Regaining complete control over Anbar, including the city of Fallujah, must be the essence of the new security plans for Iraq.” It took the Iraqi forces an entire year to go back to Anbar and achieve the minimum of conditions needed, which consisted of liberating the city through the formal state forces and the population’s cooperation.

It is noteworthy that such cooperation in Anbar to wage the liberation battle was reached under US pressure, with a direct US intervention to support the formation of military units from Anbar’s tribes. This support also included an increase in the number of US trainers at the Habbaniyah military base.

On June 13, backed by President Barack Obama, 80 US military counselors arrived at the Habbaniyah base, as well as 450 military experts; 3,000 US soldiers have been there since early February. This step was part of the framework of the liberation battles of Fallujah and the Iraqi western areas that are under IS control.

This US step was opposed by a number of popular mobilization factions, such as Asaib Ahl al-Haq, which said June 10 that the presence of US forces in Ramadi will reinforce the occupation of Iraq. These factions had already refused to participate in the war in Anbar based on the US vision or through coordination with the international coalition.

Iraq has missed many opportunities to resolve the battle in Fallujah because of disagreements over the way the Popular Mobilization Units would participate in such a battle.

On Feb. 23, 2014, Rajee al-Issawi, a member of Anbar’s provincial council, said that the delay in the entry of security forces to Fallujah was because of Nouri al-Maliki’s government and the extension of his mandate for the third time.

On April 5, the tribes’ leaders and Anbar’s politicians rejected the Popular Mobilization Units’ participation in the Anbar battle and accused the government of refusing to arm them to liberate their cities by themselves.

IS was able to change the war’s equations May 15 by taking over the city of Ramadi — Anbar’s capital — which had resisted the group’s attempts to occupy it for about a year.

On May 17, Abdul Aziz al-Zalimi, a member of parliament for the al-Ahrar parliamentary bloc, said he believed the advance of IS in Ramadi resulted from political disagreements and statements that incite.

On June 28, political sources claimed there were differences between Iraqi Prime Minister Haider al-Abadi and the US administration about the liberation of Anbar.

Based on Al-Monitor’s previous articles regarding Fallujah’s military and symbolic importance for IS, the question remains: Do the conditions and reasons still stand to start the liberation battle of Fallujah?

The answer is that IS’ potential loss of Fallujah could destroy the group’s morale. Before IS occupied Ramadi, a defeat in Fallujah — the second-biggest city in Anbar after Ramadi — would have led to a series of setbacks for IS in two areas.

The first area where IS would have failed stretches from Fallujah toward Ramadi, and then to the Euphrates cities, including Hit, Haditha, Anah, Rawa and Al Ubaidi, until finally liberating the town of Qaim on the Iraqi-Syrian border, which is considered a main strategic town for IS.

The second area starts from Fallujah toward Ramadi, then moves to the depth of the desert through the international road, reaching the strategic region of Rutbah and then the Iraqi-Jordanian and Iraqi-Syrian borders.

This breakthrough is part of the objectives of the Iraqi military actions, but it has become harder to achieve after IS took control of Ramadi, which represents the crossroads center between Anbar’s cities.

For the material gains and losses on the battlefield, taking over Ramadi was a great compensation for IS after losing the city of Tikrit in Anbar on March 11. Abu Mohammed al-Adnani, the group’s spokesman, noted on the same day that the loss of Tikrit is only a temporary setback for IS, not a defeat. The group is expected to resort to the same slogan to justify losing Fallujah.

However, will the Iraqi forces, supported by tribal fighters and the Popular Mobilization Units, succeed in liberating Fallujah?

All information indicates that IS will try to turn the Fallujah battle into a long one, whose general course would be different than the Tikrit battle. It would be closer to the battle of Beiji in the Salahuddin province, which the Iraqi forces have been trying to regain since Oct. 19, without actually resolving the battle.

IS chose Beiji to wage a war of attrition against the Iraqi forces because it can continuously infiltrate the areas controlled by the Iraqi forces whether within the city of Beiji or in the Beiji refinery, which has been witnessing unsettled conflicts between the Iraqi forces and IS for months now. The geographic composition of Beiji, which is an open area mainly composed of a desert, allows IS to infiltrate other areas, and it is difficult to close Beiji’s borders militarily, in addition to the presence of its residents who refuse to get involved in the battle.

Despite the official Iraqi announcement of the Iraqi forces besieging the city of Fallujah from its four sides, the siege does not seem complete. Witnesses from Fallujah told Al-Monitor that IS can still declare war and infiltrate the city from its northern and southern sides.

According to witnesses, the presence of residents in Fallujah represents the perfect cover for IS fighters, who use them as human shields to secretly move through the city.

The same witnesses pointed to two sensitive regions for the Iraqi forces. This first is north of Fallujah (between the cities of al-Sajar and Saqlawiyah), where dozens of randomly spread residential neighborhoods overlap. The second is south and southwest of Fallujah, where agricultural areas extend to the Euphrates River, and the desert of Anbar, which was and remains IS’ biggest hideout.

The magnitude, duration and timing of the upcoming battle in Anbar remain unknown. However, the battle of Fallujah is surely going to be massive, and it will be the first step to regain the city of Ramadi and the rest of Anbar, as long as the Iraqi forces do not fall victim to the war of attrition within the city’s mined neighborhoods.