The Islamic State’s control of Anbar province and the city of Fallujah is key to their survival, and if lost the group's demise would follow. 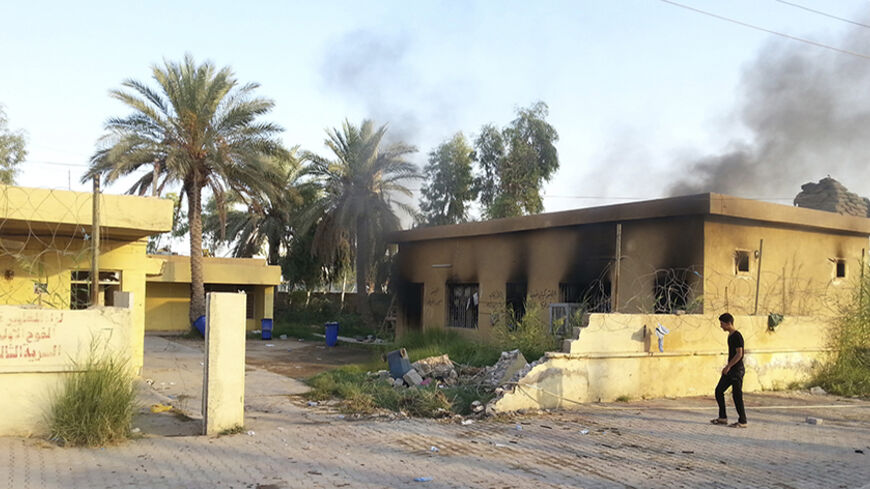 A man walks past a building damaged in the fighting between Iraqi forces and Islamic State militants in the Anbar province town of Hit, Oct. 6, 2014. - REUTERS

BAGHDAD — In and out of Iraq, talks are ongoing regarding the Islamic State’s (IS) return to Anbar province and focused effort to take control of its towns, one after the other. It was able to advance into the cities of Hit and Kabisa and control a part of Ramadi, threatening the Iraqi capital of Baghdad.

However, the question that has never been responsibly considered within the context of the fight against IS is: Did IS ever truly leave Anbar before its return today?

The group still considers Anbar its most sensitive military arena, being Iraq's largest province at a third of the area of the country and a main arena for extremist groups since 2003. It is geographically linked to three countries — Saudi Arabia, Jordan and Syria — as well as to six other Iraqi provinces: Mosul, Salahuddin, Baghdad, Babil, Karbala and Najaf.

The complex and vast desert of Anbar has always been a focal point for terrorist groups and a field for their movements across cities, away from the main transportation lines and monitoring by intelligence organizations. The demographics of Anbar, where tribal and nomadic ties dominate, has created an environment socially suitable for IS. Throughout 2013, Anbar also saw Sunni protests against the government, and was the first battlefield for IS in Iraq at the start of 2014.

The IS threat to Iraq started when it took over Fallujah (west of Baghdad) in January of 2014. Residents of Anbar see it as the most important city in the province, and armed groups and the biggest opponents to IS gravitate toward it.

Controlling Fallujah for six months did not allow the group's leader, Abu Bakr al-Baghdadi, to declare himself the caliph; this he did following the occupation of Mosul.

Circumstances suggested that during the months that followed IS’ occupation of Mosul, the group’s deterioration would start in Fallujah, as control over this city had implications for all of Anbar province. IS’ loss of control in Anbar would hasten the group’s fall not only in Iraq, but also in Syria.

The international coalition’s intervention only paid serious attention to Anbar at the beginning of August, while the political circles wasted time by changing the government and choosing its members, which gave IS an opportunity to deepen its existence and settle in a number of towns and cities.

The group divided Anbar into three administrative and military units and gradually organized its power to repress the villages and towns accordingly, by first controlling the Anbar desert, opening lines to battles it is currently fighting in Ramadi and Hit, and finally threatening the military camp called Ain al-Assad from the Khan al-Baghdadi side.

The Iraqi government’s delay in taking measures to stop the takeover of Anbar was revealed by the chairman of the Anbar Provincial Council, Sabah Karhut, who told Al-Monitor, “The tribes as well as the security and military forces in Anbar were not given the right munitions and aid, despite continuous demands raised by tribes and the local government to provide support for the cities of Anbar, which resisted IS for over 10 months.”

Karhut, who had previously asked for a US ground invasion in Anbar, said that IS gradually advanced to besiege dozens of villages along the Euphrates river, most importantly al-Buamer, al-Khafajiyah, al-Bunamer, al-Abid, al-Joghayfa, al-Hetaween and Khan al-Baghdadi. He said this advance was not accompanied by suitable governmental measures to support the resistance of the tribes in these villages.

The concept of "tribe support" seems loose. No government will be able to provide any open support for the civilians in conflict zones without clear answers to questions such as: Who receives the support? How are they coordinating with official security services? How are the tribal fighters included in the security plans? What is needed?" Is it financial, weapons, logistics or aerial support?

Finding those answers will only happen after translating the "war on IS" into practical details, including the organization, training and arming of volunteer fighters from inside the cities. This project, the "National Guard," has not officially seen the light of day so far, and is not expected to take on an effective role in the war for several months.

Several considerations are driving urgent warnings about the deterioration of the security situation in Anbar and its repercussions on Baghdad’s security. Most importantly, Anbar has an extremely dangerous view over the cities of Baghdad, Babil and Karbala, which will put all of these cities in the circle of danger.

The group appeared last April, two months before the occupation of Mosul, in the town of Abu Ghraib, which is part of Baghdad’s western administrative area and connects the capital to Anbar. IS carried out a military parade in this town, where it took over the Fallujah Barrage during the same month, cut off the water supplies, threatened large areas south of Baghdad and drowned other areas in Abu Ghraib.

The early presence of the group on the borders of Baghdad poses additional threats to the security of the capital. Attention is needed on Anbar in general and the city of Fallujah in particular, as a source of real threat and a critical factor in the war.

Regaining complete control over Anbar, including the city of Fallujah, must be the essence of the new security plans for Iraq. A dialogue must take place for the formation of the forces responsible for fighting the war against IS in Anbar as quickly as possible. The international alliance must focus its efforts on changing the equations of power in this province as a prelude to changing them in all other areas controlled by the group.