The Islamic State is taking advantage of the fact that the Iraqi army, the peshmerga and tribes are unable to establish a unified command against it by opening several fronts. 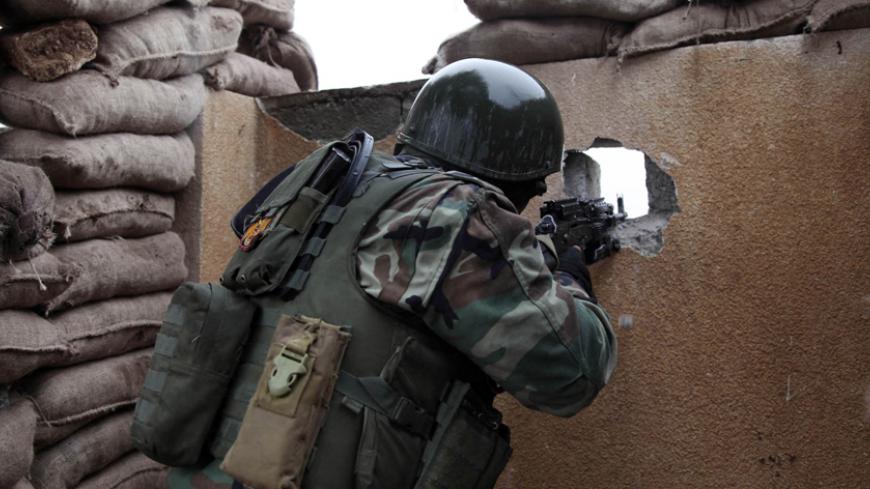 A Kurdish peshmerga fighter aims his weapon through a hole in a wall on the front line of fighting against Islamic State militants in the outskirts of Mosul, Jan. 30, 2015. - REUTERS/Ari Jalal

Contradiction prevails in official announcements regarding the course of the battles against the Islamic State (IS) and the group's movements on the ground. When Iraqis were expecting a Mosul liberation battle, IS rushed to send additional fighters to Anbar, Salahuddin and Kirkuk in a bid to open new fronts, with the aim of putting Iraqi forces on the defensive.

Between Jan. 30 and Feb. 18, IS opened several fronts that were both different and distant. IS attacked Kirkuk on Jan. 30 and reached sensitive areas in the city, including the Khabbaz oil field, before it was forced to withdraw after additional peshmerga troops arrived from Mosul.

The IS attack on Kirkuk came only a day after a Jan. 29 IS attack on the peshmerga strongholds in Tal Afar and Sinjar, northwest of Mosul. As IS distracted the peshmerga by opening different fronts on the western, eastern and northern borders of Mosul, it also opened new fronts in Anbar and Salahuddin, south of Mosul.

On Feb. 12, IS attacked Anbar's al-Baghdadi region, which is home to Ain al-Assad, an important military base where dozens of US advisers and trainers are stationed.

As the peshmerga moved toward Kirkuk, IS launched an attack Feb. 17 on the Makhmour area, west of Erbil — the closest military point of contact with the Kurdistan Region of Iraq.

On Feb. 13, IS attacked areas north of Samarra and occupied the town of Mukashafah, south of Tikrit, before withdrawing from it days later.

Although the organization managed to occupy al-Baghdadi for two days and executed many residents, it was unable to break into the fortified Ain al-Assad base. This front only began to calm down Feb. 22, when the Iraqi army and police forces managed — after the arrival of supplies from Baghdad — to open a safe passage to a residential complex, which IS then besieged for 10 days.

All these moves, along with others in areas north of Baghdad in Diyala, were designed to confuse the plans to liberate Tikrit and Mosul. IS knows full well that the psychological preparation for the liberation of Mosul — an important and complex strategic target — intensified at the beginning of 2015. Over the past two months, US leaders have stepped up their remarks about the approach of the battle to liberate Mosul and provided details as to the time of this operation, before US Secretary of Defense Ashton Carter denied these details.

IS is generally aware of the potential of its enemies. In past months, it has demonstrated a kind of realism on the battlefield. For example, when controlling certain areas — like in Diyala, Jalawla, Saadia and Muqdadiyah — became impossible due to the size of the attacking forces, it gradually backed down and chose to carry out distracting attacks.

Up until this day, IS still retains the major cities it occupied in June 2014, namely Mosul, Tikrit, Hawija, Qaim and parts of Ramadi, in addition to the city of Fallujah, which it occupied in January 2014. However, the Iraqi army, peshmerga and popular mobilization forces have defeated IS in dozens of villages along these cities' borders. IS did not back down, since it sought to prove that it was planning for a long presence in the cities, yet it began to sense that the Iraqi and international efforts to restore these cities were serious.

What has always been clear about IS’ military potential — and this is a point that the organization's leaders are well aware of — is its limited ability to confront an organized attack, supported by aircraft, from large and well-equipped military groups.

In contrast, IS’ strength lies in its ability to mobilize small groups of 100 to 200 fighters — including suicide bombers — with equipment sufficient for a short period of time to attack different targets along a broad front. This front can extend along hundreds of kilometers and contains dozens of contact points in towns and villages that are both scattered and difficult to defend all at once.

In the coming months, IS will most likely seek to thwart the ability of Iraq and the international coalition to mobilize sufficient fighters (between 20,000 and 40,000 individuals) to attack the IS-controlled cities. This will require IS to engage more troops to widen the gap on the front between it and the Iraqi and peshmerga forces, by attacking weaker points on the Iraqi side.

The dispersion of fronts, as well as their transformation into zonal fronts divided among the peshmerga, the popular mobilization fronts, the Iraqi army and the tribes, prevents the mobilization of the necessary forces to liberate IS-controlled cities.

A clear example of this is Kirkuk, where it took the Kurdish leaders and the leaders of the popular mobilization forces two days to decide on the type of force to face IS.

The same applies to Mosul and Anbar’s liberation efforts, which are still pending the training of troops made up of the city's residents.

The political differences, the partisan gridlock and the social division have been direct causes of Iraq's failure to produce a common vision and a unified leadership in the war on IS. IS understands this weakness and thus continues to open additional fronts to distract troops with battles that only delay the liberation of cities.