The battle for Mosul will be complicated by the Kurdish factor and the city's remaining population. 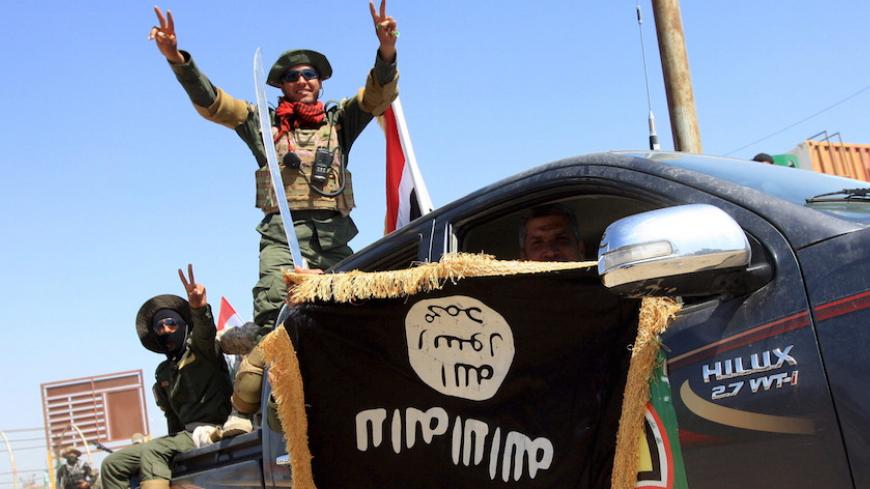 Shiite paramilitary fighters hold an Islamist State flag that they pulled down during victory celebrations after returning from Tikrit in Karbala, April 4, 2015. - REUTERS/Mushtaq Muhammed

On the evening of April 2, Iraqi Prime Minister Haider al-Abadi announced the liberation of Tikrit from the Islamic State (IS) and the raising of the Iraqi flag over the local government building. Tikrit is the first major Iraqi city to be retaken from the extremist group. IS first occupied Fallujah in January 2014 and then took Mosul and Tikrit in June. The liberation of Tikrit is informative in a number of ways in highlighting the approach needed for success in future battles against IS.

First, the military operation in Tikrit was an example of the integration of the Iraqi army and police on the one hand and the Popular Mobilization Units and the tribes on the other, along with support from the international coalition assembled to launch airstrikes against IS. The coalition played a pivotal role in targeting IS fortifications in Tikrit.

Second, holding ground in Tikrit, which will not be easy, will require trained forces able to completely cleanse the city of gunmen and IS members, rehabilitate it and allow inhabitants to return and restore normal life there.

Third, the battle for Tikrit has sent the message to IS that the Iraqi forces have overcome the shock of their initial defeat by the group and have shifted into fighting mode. Eliminating IS in Iraq is now only a matter of time.

Fourth, speeding the rehabilitation and reconstruction of Tikrit to permit the return of displaced residents will undermine the momentum of IS’ propaganda campaign, which has portrayed Iraqi forces simply as militias seeking revenge. Thus, a key factor is that the forces stationed in Tikrit remain disciplined and that they hand over security to the local police, as ordered April 1 by Abadi after the city is fully secured.

It will be a message of reassurance to local residents that security in the city will be the task of the police after the army and the Popular Mobilization Units wrap up their operations, restoring the civilian character of Tikrit. On the first day of the city's liberation, fighters in the Popular Mobilization Units torched and looted a number of homes. Abadi condemned such acts and threatened to sanction anyone caught violating the rights and property of Tikrit residents. Numerous violators were arrested. The process of reconstructing infrastructure in the city has already begun.

The success in liberating Tikrit presents Iraqi leaders with their next choice — determining when to begin operations to retake Mosul and Anbar. According to most predictions, the next battle will be in Anbar, because that confrontation does not require the degree of political consensus that will be necessary before the battle for Mosul can get underway.

Although the tribes in Anbar will partner with Iraqi forces, Mosul’s situation is more complex because of an overlapping of Kurdish peshmerga forces with units being trained by Atheel al-Nujaifi, the Mosul governor, with the help of Turkey and the United States. The participation of the Popular Mobilization Units at Tikrit required taking a number of factors into consideration. It was difficult to devise an arrangement for coordinating the popular forces and the international support being provided. Developing an effective configuration of forces in Anbar will necessitate reaching understandings with the various tribes in the province.

There are additional military factors as well. IS controls most of Anbar's cities, while Iraqi forces control al-Baghdadi, Haditha and some areas of Amiriyat al-Fallujah, al-Karma and Ramadi. The cities of Anbar lie in a line along the Euphrates River, which will allow a distribution of roles among Iraqi government forces, the Popular Mobilization Units and the tribes. The Anbar tribes' are strongest in Ramadi, and this will be key to the battle. The clans can play a major role in securing their areas and turning them into launching pads for the liberation of Fallujah, southeast of Ramadi, and al-Qaim, northwest of Ramadi, IS' strongholds.

The battle of Anbar will not be easy. The province constitutes about one-third of Iraq territory and borders the provinces of Babil, Baghdad, Karbala, Najaf, Salahuddin and Mosul as well as Saudi Arabia, Jordan and Syria. Anbar has been a semi-permanent hub for extremist organizations since 2003. Its geographic complexity, expansive deserts and multiple borders make the task of securing it difficult as well as risky.

The presence of civilians will be an important factor in determining how the upcoming battles will be carried out. Mosul is still densely populated by some 1.5 million people, so liberating it will also require trying to avoid civilian casualties. As in Salahuddin province, most inhabitants of Anbar's city centers have left.