Lt. Gen. Abdul-Wahab al-Saadi, who oversaw the Fallujah operation, speaks to Al-Monitor about lessons learned from that fight and offers his view on the impending battle to retake Mosul from IS. 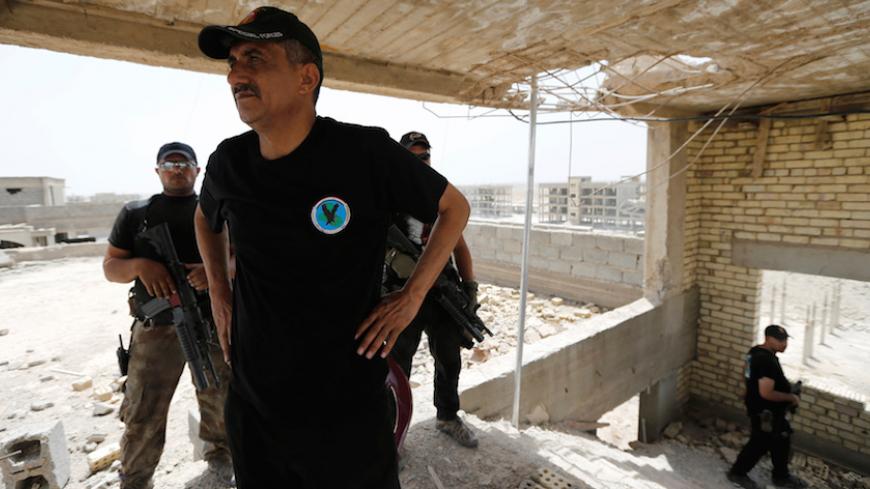 On the outskirts of Fallujah, the commander of the Fallujah liberation operations, Lt. Gen. Abdul-Wahab al-Saadi, stood smiling and surrounded by troops from the Counterterrorism Service. He talked to them about the city, long touted as impregnable to any outside force. His men laughed heartily and shared stories of the storming of the city.

He exchanged bits of conversation with them, agreeing with some and disagreeing with others. He joked with them all, as they stood by him taking pictures. Since the Fallujah offensive was launched, social networking sites have been awash with smiling selfies showing Iraqi army soldiers and members of the Federal Police and Counterterrorism Service standing next to Saadi.

Saadi was in a positive mood this day as he patted his soldiers on the back, praised their efforts in the battle to liberate Fallujah and spoke to them about the importance of maintaining absolute readiness to fight the battle for Mosul in a few days.

As he stood on the outskirts of Fallujah, Saadi told his troops, “Iraq is more important than anything else, and your role in combating terrorism must rise to the level of your, and our, great responsibility toward this country and its need to banish terrorism.”

As the offensive to liberate Fallujah came to an end, Saadi set up temporary headquarters at the Tareq base and the headquarters of the Iraqi army’s 1st Division on the outskirts of Fallujah. Al-Monitor’s reporter arrived at the encampment June 30 and conducted the following interview.

Saadi:  The battle to liberate Fallujah was a tough battle fought by Iraqi security forces and other affiliated factions to purge the city from the terrorist scourge that spread through it for years. But the hard and effective efforts of our heroic security forces to eradicate terrorism succeeded in surrounding Fallujah and subsequently storming it within days.

We received aerial support from the international coalition and Iraqi army aviation units, but the battle on the ground was fought by Iraqi forces composed of Iraqis. We did not receive any American or Iranian counsel with regard to the ground battle, and I personally did not meet with non-Iraqis during this battle.

Al-Monitor:  What role did American and Iranian advisers play in the operations to liberate Fallujah?

Saadi:  The plan to liberate Fallujah was drawn by Iraqi military commanders, and it was perfectly executed, leading to the liberation of a city that [IS] long thought would be impossible for Iraqi military units to approach and penetrate. But we surprised this terrorist organization, reached Fallujah, and liberated it thanks to a purely Iraqi plan.

Neither American nor Iranian advisers had any role to play in the planning of the operation to liberate Fallujah. Only troops from the Iraqi joint forces and the Counterterrorism Service took part in the storming and liberation of Fallujah.

Al-Monitor:  What was the contribution and effect of formations that supported Iraqi security forces in the battle for Fallujah?

Saadi:  Naturally, the Counterterrorism Service is considered to be the most experienced, knowledgeable and best trained to wage urban battles. Other military units that took part in the operation to liberate Fallujah lacked such experience and were assigned tasks commensurate with their abilities. Though, on a positive note, we found out that the Ramadi police special contingent had gained experience in the battles that they fought alongside our forces in the Ramadi and Heet sectors of Anbar province. In truth, when it comes to urban warfare and combat skills, these contingents possess experience that surpasses that of some Iraqi army units.

Al-Monitor:  What role did the international coalition play in this battle?

Saadi:  There is no doubt that the international coalition aviation played a positive role in the battle, thanks to the high level of coordination between it and Iraqi security forces. Warplanes bombed [IS] positions for 24 hours straight and responded very quickly to our units’ calls for support.

Al-Monitor:  Is there any truth to claims of abuses against civilians perpetrated by the Popular Mobilization Units? And what measures will the military establishment take in that regard?

Saadi:  Warfare is conducted with weapons, and violence is commonplace in such situations. Unfortunately, in some instances, civilians fall victim to the fighting, for no battle is ever completely devoid of infractions. But I personally have not witnessed any action that rises to the level of being characterized as abuse of civilian human rights. I regret the media’s focus on minutiae while ignoring the issue of this important battle against terrorist forces that spilled the blood of Iraqi martyrs.

Al-Monitor:  Who will take charge of security in liberated areas? Will Iraqi forces not native to the city be entrusted with this task, or will local forces composed of clansmen and others assume that role?

Saadi:  Cities liberated from terrorism require highly efficient plans to maintain security on the ground. We, at the Counterterrorism Service, are not responsible for security, but I think that, in each city, local forces will control the ground with some potential support from Federal Police forces. In Fallujah specifically, I believe that maintaining security on the ground will fall upon the Baghdad Operations Command’s west Baghdad units, in cooperation with the Federal Police.

Al-Monitor:  Was the battle to liberate Fallujah an easy or difficult operation?

Saadi:  A battle such as that can only be difficult as it aimed to liberate a city that has completely been under the control of terrorists for the past two years, during which [IS] maintained a large presence, with its militants planning, training and preparing for all aspects of this battle, particularly by digging trenches and tunnels, as well as mining the land, government institutions and other buildings. But this battle was decisive for [IS], whose defeat was an important setback and sign that the battle for Mosul will be decided in favor of Iraq and the Iraqis.

Battles raged in Fallujah for days. Yet sparing civilian lives remained atop our priorities, despite the fact that it delayed victory and caused us untold difficulties because [IS] used Fallujah civilians as human shields.

The civilians that I was in contact with inside Fallujah always maintained that entering the city would be impossible for us to achieve, due to the fact that [IS] was strongly entrenched and highly prepared for the fight. Even when I reached the outskirts of the city, people inside Fallujah continued to inform me that breaching its defenses would be impossible. Still, in the end, we succeeded in completely liberating the city, with everyone surprised that Iraqi security forces managed to enter this city, considered to be the second most important stronghold for [IS] after Mosul.

The most difficult phase was when we encircled and stormed Fallujah, with the period extending from May 30 to June 10 witnessing the harshest fighting, as the Counterterrorism Service single-handedly killed some 750 [IS] militants.

Al-Monitor:  Does [IS] still have a presence in Anbar, and are their numbers truly as high as indicated by news of their convoys being targeted in Amiriyah Fallujah?

Saadi:  Hundreds of vehicles attempted to flee Anbar toward Karbala and the desert. But the Iraqi air force successfully bombed and destroyed them. These were the remnants of [IS] troops in the Khalidiya Island, and I think that their presence there is nil, or that small numbers remain that will be dealt with shortly.

Al-Monitor:  What are your expectations for the Mosul battle? Will it differ from those of Tikrit and Fallujah? And who will take part in it?

Saadi:  The battles underway in southern Mosul’s Sharqat and Qayyarah are progressing positively. But the battle for Mosul is peculiar, in that the city is home to a large number of civilians. Our aim is to kill all the terrorists in one stroke, but we are worried about, and concerned for, the lives of civilians there.

I think that the battle for Fallujah determined the identity of forces that will participate in liberating Mosul. These decisions shall be made by the commander in chief of the armed forces, and we, in the Counterterrorism Service, stand ready to wage the battle, achieve victory and exterminate [IS] from the city.

Al-Monitor:  Are political disputes and statements concerning the progress of battle affecting your task?

Saadi:  I leave politics to the politicians. With regard to military matters, I have not, nor will I allow any politician to meddle in our affairs. We pay no regard to political disputes because our task is to cleanse Iraq from terrorism and terrorists, while refraining from interfering in other matters.

Al-Monitor:  Will you lead the operations to liberate Mosul?

Saadi:  It would be good to command operations aimed at liberating the two largest [IS] controlled cities. I hope to be tasked with leading the liberation of Mosul, and it would be wonderful if I did so, but the final decision will be taken by the commander in chief of the armed forces, Haider al-Abadi.