Iraqi security forces launched a military operation in Fallujah, the Islamic State's last major stronghold in Anbar province; if the operation succeeds, it will deal a serious blow to the extremist organization. 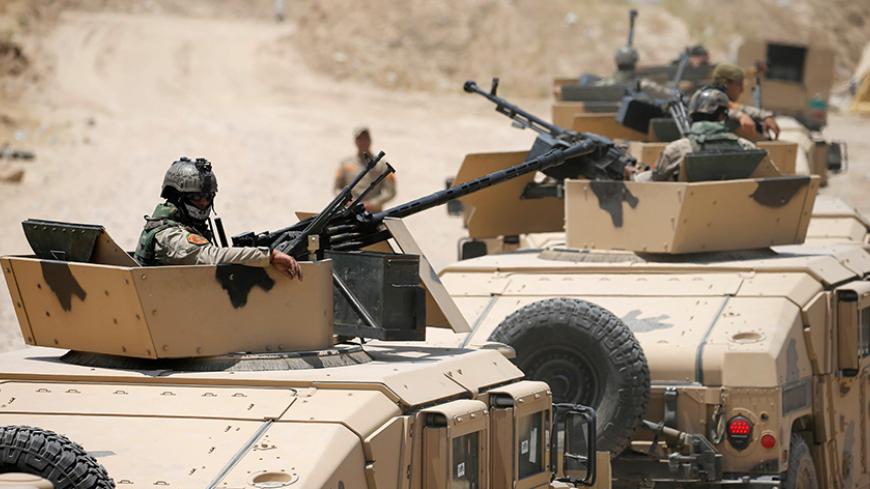 Vehicles of the Iraqi security forces are seen on the outskirts of Fallujah, May 23, 2016. - REUTERS/Thaier Al-Sudani

Iraqi security forces have launched Operation Break Terrorism in collaboration with the Shiite-dominated Popular Mobilization Units and local Sunni tribal mobilization forces to drive the Islamic State (IS) from the key town of Fallujah, the last major IS stronghold in western Anbar province.

Fallujah, long a bastion of anti-government insurgent groups, was one of the first areas in Iraq to fall to IS and its allies in January 2014, months before the group overran Mosul and other Sunni-dominated parts of the country.

Prime Minister Haider al-Abadi ordered the launch of the operation in the early hours of May 23, saying, "There is no option for Daesh [IS] except to flee," referring to the group by its common Arabic acronym.

The operation was launched from the southeast, southwest, northwest and northern flanks of Fallujah, according to Karim al-Nuri, a spokesman for the mobilization units who spoke to Al-Monitor via phone from the Karmah area to the southeast of Fallujah, some 60 kilometers (37 miles) west of Baghdad.

"Their [IS] resistance has not been as heavy as we have been expecting," said Nuri. "They have been relying on vehicle-borne suicide attacks, planted bombs and snipers so far."

IS supporters' accounts on Twitter circulated what appeared to be an official announcement from IS' Fallujah Wilaya, which claimed that 16 Iraqi forces were killed in a suicide car bomb attack east of Fallujah.

Nuri said that over 10,000 mobilization unit forces have been taking "an active part in the battle," adding that his forces are cooperating with Iraqi security forces as well as tribal Sunni fighters. The Shiite paramilitaries have surrounded Fallujah since last summer.

The US-led coalition also carried out seven airstrikes in the Fallujah area between May 14 and May 20 in preparation for the assault.

US forces are currently involved in Operation Break Terrorism by advising Iraqi forces. But Col. Steve Warren, the US military spokesman in Baghdad, has told Fox News that the US-led coalition is not going to "drop bombs in support of the Shiite militias" who are based on the outskirts of Fallujah. The United States has been worried about the involvement of Shiite paramilitaries in offensives in Sunni areas because those forces are largely supported by Iran.

According to Warren, between 500 and 1,000 IS fighters are believed to have remained inside Fallujah.

No figures have been released by Iraqi authorities about the overall number of forces taking part in the battle of Fallujah, but some Iraqi news outlets have pointed out that as many as 20,000 federal police units have also joined the operation.

Iraqi forces appear to have made some progress. Local media reported that Iraqi forces killed Abu Hamza, IS governor of Fallujah, and another senior leader known as Abu Amr al-Ansari on May 23. Gen. Abdulwahab al-Saedi, the commander of the Fallujah operation, said May 23 that IS forces have fled the battlefield in the Karmah and Saqlawiyah areas in the eastern and northern sides of Fallujah. Saedi also told Iraqi news media that Iraqi forces had taken the district of Karmah, 13 kilometers (8 miles) east of Fallujah on the first day of the operation.

The attack on Fallujah by Iraqi forces came after an important victory in the nearby town of Rutba in Anbar on May 19. In December, Iraqi forces also recaptured Anbar's provincial capital, Ramadi, from IS.

Fallujah is now the last major urban center in Anbar still under the control of IS jihadis.

"Taking Fallujah will be a big blow to IS," Ahmed Ali, a senior fellow at the American University of Iraq-Sulaimani's Institute of Regional and International Studies (IRIS), told Al-Monitor.

"Strategically, [the success of this operation will mean] IS will not be as close to Baghdad as now, as Fallujah is the strongest IS-controlled point to Baghdad," he said.

But pushing IS out of Fallujah will not mean the end of IS in Anbar province, which occupies around one-third of Iraq's area. Ali believes the extremist group will most likely relocate to the vast deserts of Anbar, "which will be very difficult to control."

Prior to the launch of the operation, the Iraqi military called on Fallujah's residents to evacuate the town. A day before the offensive, the town's mayor had told the official Iraqi news agency, NINA, that over 50,000 civilians were still trapped inside the town.

An important element of the Fallujah operation is the relationship between the Shiite Popular Mobilization Units and the local Sunni forces. In the past, local Sunnis and rights groups accused the mobilization units of abusing Sunnis in areas such as Tikrit and Diyala.

But Nuri said there is no reason for concern now.

"We are fighting with [Sunni] tribal forces from the area and this is the biggest testament of the level of trust between us," Nuri said.

Amid the political turmoil that has engulfed Iraq in recent months and culminated in attacks by angry protesters on Abadi's and parliament's offices, a victory in Fallujah will be a boost to the embattled prime minister, given the symbolic and strategic value of the town.

"A battlefield victory will bolster Abadi's position and help him dictate the points of the political agenda in Iraq," said Ali.