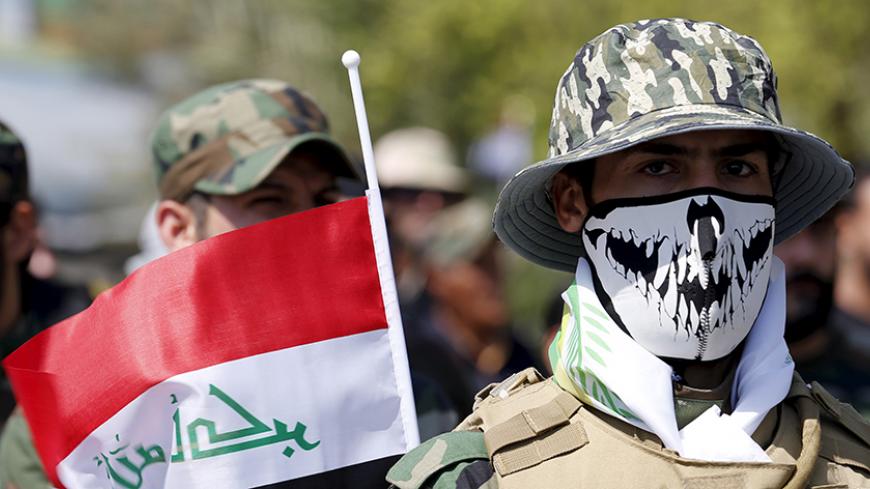 Iraqi Shiite men from the Popular Mobilization Units march during a parade marking the annual Quds Day, or Jerusalem Day, on the last Friday of the Muslim holy month of Ramadan in Baghdad, July 10, 2015. - REUTERS/Thaier al-Sudani

BAGHDAD — Factions affiliated with the Popular Mobilization Units have taken part in the operations to liberate Fallujah launched on May 23 in support of the Iraqi security forces. However, some of the forces fighting under the group's umbrella have well-known relations with Iran through the Quds Force and its commander Qasem Soleimani, who has been in Iraq since the Islamic State (IS) took over the city of Mosul June 10, 2014.

Some of the Iraqi Sunni forces have been against the participation of the Popular Mobilization Units in the battle to liberate Fallujah, protesting that the militia would commit human rights violations as it had done last year in the city of Tikrit in the Salahuddin province.

Although this rejection might be based on sectarian concerns, there have been reports and evidence of these violations.

Iraqi activists posted videos online showing the group's forces attacking civilians in Fallujah. A video posted by Sunni activists on YouTube showed a man wearing a military uniform beating a group of civilians with a rod, commanding them to proclaim that the “people of Fallujah are cowards.”

Another video shows a group of civilian men in distress, some of them bloodied and lying on the ground, perhaps unconscious. Then members of the Popular Mobilization Units accuse them of being affiliated with IS before attacking them.

In a TV report broadcast on the Saudi al-Arabiya TV on June 6, a Fallujah resident in his 60s said he was part of a group taken by the Popular Mobilization Units by car from the Karma district to Saqlawiyah and beaten.

Saad al-Hadithi, spokesman for Prime Minister Haider al-Abadi, told Al-Monitor, “The prime minister ordered that arrest warrants be issued for those accused of committing abuses against civilians in the battle for Fallujah and for them to be prevented from fighting, regardless of who they are, and referred for investigation. At present, some perpetrators of violations are being investigated.”

Hadithi added, “The Iraqi government has no interest in committing human rights violations. On the contrary, any violation would affect its reputation and the course of the battle in general. Ever since the battle to liberate Fallujah began, the prime minister has emphasized that the troops will enter Fallujah as liberators, not aggressors. The Iraqi forces could have regained Fallujah in a short period of time, but they put the safety of civilians above all, and this is why they are progressing slowly.”

In a report published June 9, Human Rights Watch noted, “The announced investigation into allegations of abuse of civilians around Fallujah by Iraqi government forces is a test for the government’s ability to hold abusive forces accountable. Judicial officials should conduct this investigation transparently and impartially, assess command responsibility and ensure protection for victims and witnesses.”

He added, “We, the Popular Mobilization Units, are keen on keeping civilians safe, and there are pictures and video clips that show how [humane] we are in dealing with civilians and treating them as our brothers and our families. But the media highlights things that do not exist and broadcasts fabricated pictures and videos.”

Diana Eltahawy, Amnesty International’s researcher on Iraq, told Al-Monitor, “Amnesty International's concerns are based on information and testimonies of individuals who have managed to escape from Fallujah and the surrounding areas since May 23, including local officials, analysts, activists and former detainees.”

Eltahawy added, “According to the testimonies, fighters with the Popular Mobilization Units mistreated hundreds of men from Saqlawiyah after they arrested them on June 2, and many of the detained who were transferred to the district of Fallujah suffered from fractures, bruises and burns as a result of the beatings that the detaining forces subjected them to.”

On June 13, Suhaib al-Rawi, the governor of Anbar, announced the recommendations of a committee he formed to investigate the actions attributed to the group against those fleeing the Fallujah areas.

The committee stressed the need to “ask Prime Minister Abadi to intervene personally to reveal the fate of the missing people who were displaced from Saqlawiyah" and said, "These total 643 civilians, while 49 others were killed while attempting to flee Saqlawiyah.”

On June 5, Abadi said in a press statement broadcast by the semi-official Al-Iraqiya TV, “I admit that there are mistakes that occurred, as the combatants who took part in the Fallujah battles have different backgrounds.”

He went on, “We are against any violations, and we stressed to the security agencies the need to respect human rights and the dignity of civilians. The abuses against civilians were not systematic, but we will neither remain silent about them nor cover for anyone who made them.”

The violations during in the battle for Fallujah may be far from the last of their kind, as large numbers of fighters in the Iraqi security forces and the troops supporting these forces are untrained to deal with civilians in conflict zones. They also tend to view all the Fallujah residents as IS members, a prejudice that has encouraged some pro-government fighters to attack them.