Will Popular Mobilization Units participate in battle for Mosul?

Popular Mobilization Units leaders insist on participating in the fight to liberate Mosul, despite renewed demands by some Sunni politicians to exclude the units because of their history of human rights violations. 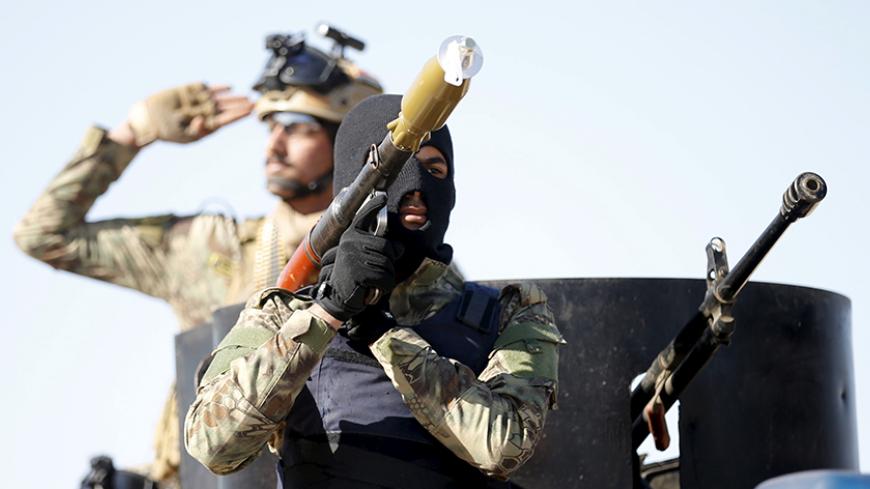 Ever since Iraq's Popular Mobilization Units (PMU) was founded three days after the Islamic State (IS) took control of Mosul on June 10, 2014, the PMU has been controversial. It has participated in several battles that reportedly involved human rights violations such as the Tikrit liberation battle in April 2015 and the Fallujah liberation battle just days ago.

Because of the alleged violations, Sunni political parties have called on the mostly Shiite PMU not to engage in the battle to liberate Mosul. But for the PMU, which supports the Iraqi security forces, the Mosul battle is key. PMU leaders believe the battles they have fought so far have been leading to Mosul, which is of great importance to IS and serves as the capital of its caliphate in Iraq.

Despite Sunni politicians' fears and the ongoing effort to keep the PMU out of the battle, some PMU commanders insist on participating.

Hadi al-Ameri, leader of the Badr Organization, a PMU faction, said in a June 25 press statement, “The PMU will take part in the liberation of Mosul, against the will of the politicians who oppose this,” in reference to some Sunni politicians from Mosul.

Ameri’s statement shows the major differences plaguing Iraqi politicians over the participation of the PMU, which may end up being fully involved in the liberation operation, as announced June 25 by parliament Speaker Salim al-Jubouri during his visit to Makhmour, east of Mosul.

“The PMU, the Kurdish peshmerga and the Sunni tribes will take part in the battle to liberate Mosul,” he said.

Saad al-Hadithi, a spokesman for Iraqi Prime Minister Haider al-Abadi, told Al-Monitor, “The PMU are regular troops that belong to the Iraqi state" and follow Abadi's command. "They will participate in the liberation of Mosul, and their movements will be in line with the military plan set by the joint Iraqi forces.”

However, the military operation to liberate Mosul is seemingly subject to a political consensus. As a compromise, the PMU might stay on the outskirts of the city but remain involved in the liberation process.

Keeping the PMU on the outskirts of cities being liberated without involving them in battle falls under a US-Iraqi agreement known as the “Tikrit rules” developed when disagreements arose between the PMU and the Iraqi field security forces after the PMU entered Sunni areas it was not allowed to enter. Those rules are designed to prevent sectarian fighting and human rights violations.

Iraqi military strategist Hisham al-Hashimi told Al-Monitor, “The PMU troops will take part in the liberation of Mosul, but they will not reach the center of Mosul. They will stay on the outskirts of the city. There was a previous agreement between the international coalition and the Iraqi government not to let the PMU enter the city of Mosul.”

The League of the Righteous movement, a PMU faction, issued threats against anyone trying to prevent the PMU from fighting for Mosul. Movement spokesperson Jawad Tlabawi said in a June 25 press statement, “Those opposing the participation of the PMU factions in the liberation of Mosul will be crushed and should only blame themselves.”

PMU spokesman Karim al-Nuri confirmed during a telephone conversation with Al-Monitor, "No one can stop our forces, which are a national military force seeking to rid Iraq of terrorism. The PMU will disregard those opposing their participation for political purposes.”

Political differences will be dramatic in the battle to liberate Mosul.

Sunni politicians say it is prudent to keep the PMU outside Mosul to avoid any revenge operations or friction with civilians that could lead to human rights violations.

However, no one can guarantee that the PMU will not enter the city. In the Fallujah liberation battle, PMU members wore federal police uniforms and entered the city's center, even though PMU faction leader Ameri had stated publicly that would not happen.

Those opposing the PMU’s participation in the liberation of Mosul may be facing a fait accompli imposed by the prime minister, even if he is only responding to pressure from PMU leaders and Iran.