Iraqi government approved officially the participation of the Popular Mobilization Units in the Mosul battle, which is supported by the United States and Iran; however, Sunni parties are afraid of this decision. 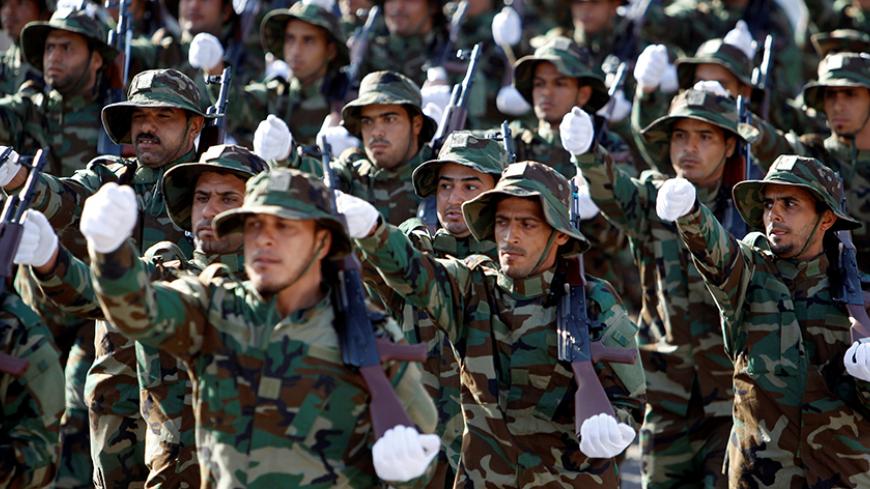 Sunni politicians objected to this approval because they do not want the units to take part. On Aug. 8, the press office of the head of the Mutahidoun bloc, Osama al-Nujaifi, issued a press statement talking about a meeting in Nujaifi’s office between the Sunni coalition and Jones on the same day and discussing several issues, mainly the Sunni stance regarding the PMU participation in the Mosul liberation battle.

The convening leaders of the Sunni blocs asserted that they disapprove of the PMU participation in the battle, claiming that the citizens of Mosul refuse this participation due to the violations committed by factions from the PMU during the liberation of other regions, such as Salahuddin and Fallujah.

The leaders believe that “this participation will send out bad messages to the citizens of Ninevah province and might be considered propaganda for the Islamic State [IS].” Nujaifi repeated his objection to the PMU participation in the Mosul battle in his meeting Aug. 21 with the Kuwait ambassador to Iraq.

Despite the objections to the PMU participation and the accusations against them, the leaders of these forces still insist on participating and could care less about the objectors.

In a quick response to the stance of the Mutahidoun bloc in this regard, member of the PMU Opinion Committee Karim al-Nuri described the meeting between the Sunni politicians and Jones as “shameful,” and said, “The PMU are essential forces that will certainly participate in the Mosul battle.”

In a press statement published Aug. 8 on the official website of the PMU, Nuri said, “The commander in chief of the armed forces, Haider al-Abadi, has decided on the PMU participation in the Mosul liberation battle as it is a military formation affiliated with the Iraqi security institution, and no foreign parties should intervene in the country’s internal affairs. The United States and any other parties cannot forbid the PMU from participating in the battle.”

Human Rights Watch (HRW) had called on the Iraqi army commanders July 31 to forbid militias, i.e., the PMU, that have a dangerous record of violations from participating in military battles in Mosul. HRW wrote, “In order for the government to abide by all possible measures to protect civilians and ensure the respect of the rules of war, it must stop these militias from participating in the Mosul battle.”

In this framework, Joe Stork, the deputy head of the Middle East Department at HRW, said in the same report, “Militias which constitute part of the PMU have committed heinous violations several times on a large scale sometimes, most recently in Fallujah. There were no consequences to their actions despite the government’s promises to launch an investigation. Iraqi leaders must spare civilians in Mosul the huge danger of militias that have a record of violations.”

The PMU participation in the Mosul liberation battle is not the only thing angering Sunnis, who were even more distressed to find out that leader of the Iranian Quds Force Qasem Soleimani might also participate in the battle. Mosul citizens are increasingly concerned about possible violations against them.

PMU spokesman Ahmad al-Asadi said in a statement July 30 that he hopes Soleimani would be present in the Mosul liberation battle because he has largely contributed to the battles against IS. He added that the PMU is so eager to have Soleimani participate that their desire might outweigh the will of the Iraqi government and the citizens of Mosul in regard to the presence of an Iranian official in the battles.

Apparently, Sadrist movement leader Muqtada al-Sadr also refused the participation of the PMU and said Aug. 8, in response to a question by one of his followers, “The Mosul liberation battle must be fully in the hands of the Iraqi security forces. We will not accept for the occupiers [United States] or any other party [PMU] to interfere.”

Sunni politicians and civilians in regions under IS control will not rest as long as there are forces that they think are out there to get them rather than free them, and as long as some armed factions are taking action without the knowledge of the Iraqi government. The latter will not be able to control all activities or forbid all human rights violations.

In case the PMU do participate in the Mosul liberation battle, it is very likely to result in human rights violations and clashes between the Shiite units and the Sunni National Forces that are led by Ninevah province’s former governor, Atheel al-Nujaifi. These factors are enough to obstruct the course of the battle.