Clashes between Sunni protesters and the Iraqi army in Fallujah in western Iraq have aggravated the demonstrations, with tribal leaders threatening retaliation, writes Ali Abel Sadah. 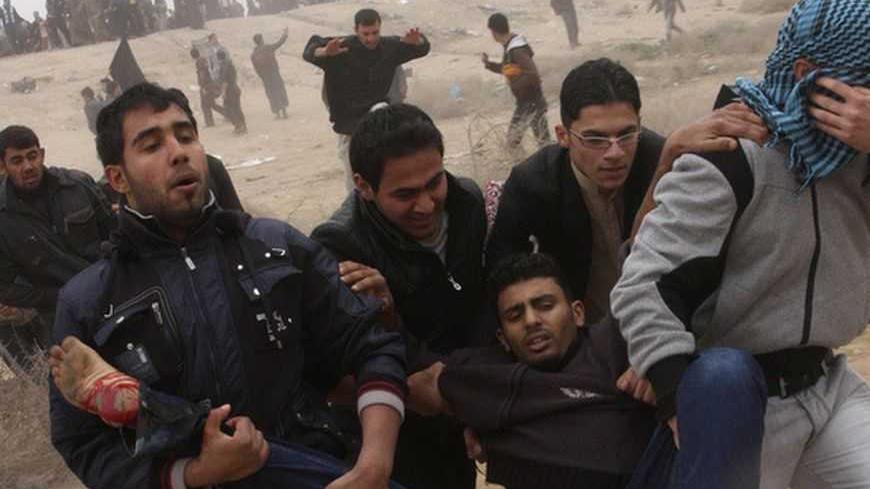 Iraqi Prime Minister Nouri al-Maliki failed to maintain discipline and control over his military forces in the matter of the demonstrations held by Sunni Arabs in the city of Ramadi in western Iraq. As a result, four were killed and nearly 40 wounded when Iraqi troops opened fire with live ammunition in Fallujah, the capital of western Iraq. This took place on Friday, Jan. 25, 2013 just before the protesters launched a two-week sit-in bearing the name “No Retreat.” It was immediately followed up by reports that three Iraqi soldiers had been kidnapped and two more killed in the same region.

According to the protesters’ version of events, some of them left the main roadway leading to the area of the sit-in in the town of Ramadi and began to head toward the military base located some three kilometers away. They chanted against Maliki and threw rocks and water bottles at the soldiers. Half an hour later, the soldiers decided to open fire upon them.

The Iraqi military’s version of events, however, claims that they were subjected to an armed attack which killed two and wounded eight.

Hussain al-Shahristani, Iraq's deputy prime minister for energy and the prime minister’s representative to the parliament, announced that “two of the martyrs of Fallujah were from al-Qaeda.” He went on to elaborate that they were killed attacking an army checkpoint far removed from the square where the protesters had congregated, and that afterward their corpses were brought to the square so that they could be counted as among the martyrs of the protest.

In the course of the joint press conference he had convened with the ministers of justice (Hassan al-Shamari), human rights (Muhammad Shayya al-Sudani) and state (Safa al-Din al-Safi), Shahristani stated further that “the investigation being carried out by Saadoun al-Dulaimi has indicated that two of those killed at Fallujah were members of al-Qaeda.” Shahrastani went on to note that “Dulaimi has confirmed that two members of al-Qaeda were killed while participating in a group offensive targeting the Iraqi army’s control of the Ramadi-Fallujah highway in a remote area far removed from the area of the sit-in.” He explained that “their two corpses were then brought to the protesters’ area in order to say that they were killed by army fire.”

While the clash continued between the protesters and the army, demonstrations continued to flock to the area of the sit-in, where the local mosques held a united prayer. The local clerics led the crowds to Dignity Square in Anbar.

The people of Fallujah suffered from severe stress and anxiety following the clashes. In Baghdad, Maliki warned against what he described as a “conspiracy” surrounding the demonstrations and of a slide into violence instigated by gangs that had infiltrated the protesters’ ranks. But he refrained from publicly censuring members of the army who responded to civilians throwing water bottles with live ammunition.

But the Ministry of Defense announced this evening, Jan. 29, that it was opening an investigation into the event and stressed its desire to refer soldiers for prosecution. Yet the outrage expressed by tribal leaders in Fallujah shows no signs that they are willing to cool things down simply on account of these government declarations.

Abdul Malek al-Saadi, a prominent Sunni cleric who recently led the effort to organize the protests, publically called for “all Iraqi politicians in the government and the parliament to withdraw from the existing political system.”

In a recent statement obtained by Al-Monitor, Saadi stated that the army must abandon its positions, join in the demonstrations and not “heed the words of a tyrannical ruler executing foreign directives,” in a reference to Maliki and his relationship to Iran.

Nevertheless, Saadi returned to Fallujah the next morning to hold intensive discussions and meetings with the prominent figures of the city of Fallujah and entreated them to calm matters and steer clear of provoking a new outbreak of violence in the country.

A clerical figure close to Saadi’s family stated that the latter held various meetings with tribal leaders in Fallujah on Saturday morning, Jan. 26. According to this source, he prevailed upon them to maintain calm and to refrain from any attempts to take revenge.

Meanwhile, the Iraqi army in Fallujah has sought to avoid renewing friction with the residents and the enraged protesters, and has largely withdrawn from the city. Their place has been taken by emergency police forces “now overseeing Ramadi city deploying into Fallujah and assuming the duties of preserving law and order in the city.”

Many observers believe that moving the police force of Ramadi (the capital of the Anbar province) eastward into Fallujah may alleviate the prevailing tension. Many police members are, after all, Sunni Arabs native to the Anbar province.

A source told Al-Monitor that “the withdrawal came at the behest of tribal leaders, who feared that at the funerals for those killed in the clashes, thousands of mourners might move to attack army patrols.” The source added that “local army leaders agreed to the demand.”

Tens of thousands of Fallujah residents attended the funerals of those killed at the hands of the security forces, demanding that those involved be held accountable, and the prosecution of Commander-in-Chief of the Armed Forces Nouri al-Maliki.

But attempts by religious leaders to ease the tension or prevent tit-for-tat reactions have not stopped a number of rioters from assaulting police departments inside the city.

A source involved in the leadership of the Anbar operations told Al-Monitor that the protests in Fallujah took control of military observation towers and set fire to them after the Iraqi army abandoned them in its withdrawal to bases outside the city.

According to the same source, the event has repeated itself across a number of other observation posts, yet so far without any casualties. Nevertheless, the situation has deteriorated since the municipal police announced that “unidentified gunmen kidnapped four Iraqi soldiers while they were leaving a military base south of Fallujah city.”

As for the people of Fallujah, bound by strict tribal traditions and laws, the killing of civilians in their own backyard constitutes a horrific event, leading many to feel provoked.

Some observers fear that uncontrolled anger on the part of a few incensed teenagers — who constitute an active component of the Sunni demonstrations — might lead to acts of revenge.

Ali Abel Sadah is a writer and journalist from Baghdad working in both Iraqi and Arab media.