As al-Qaeda-affiliated groups expand their activities throughout Iraq, some believe they are eyeing Anbar province, where a “huge battle” could unfold in the near future. 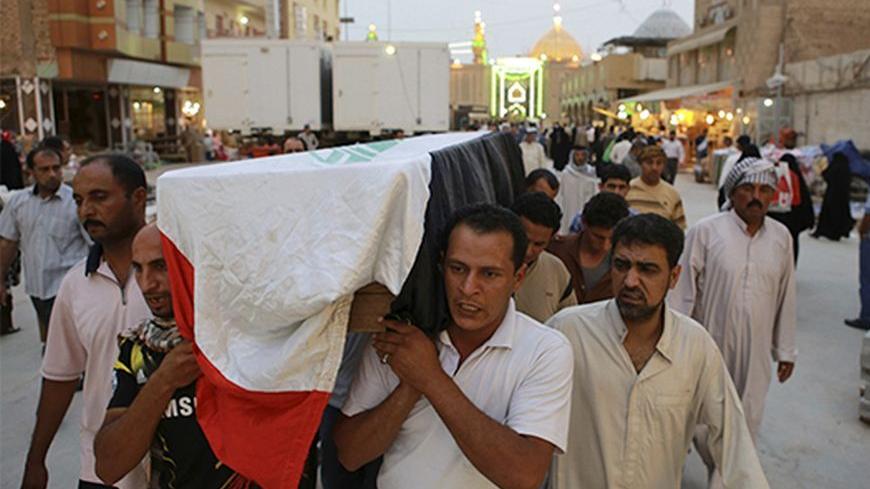 Relatives carry the coffin of an Iraqi police officer killed by militants in the Sunni heartland of Anbar province during a funeral in Najaf, around 160 kilometers (100 miles) south of Baghdad, May 20, 2013. - REUTERS/Ahmad Mousa

While the activities of the Islamic State of Iraq and al-Sham (ISIS) — the regional faction of the international al-Qaeda organization — are expanding across the Iraqi map through bombings that are becoming ever more violent, Anbar province west of Baghdad is considered the most valuable location for various strategic considerations. Furthermore, it is expected that Anbar will serve as fertile ground for a real war in the next few months.

On Oct. 21, suicide bombers attempted to storm the security zone in Fallujah, which includes a police station and a number of governmental institutions.

The armed individuals did not succeed, and all of them were killed in subsequent fierce clashes. Anbar Police Chief Hadi Razij Kassar affirmed that six armed individuals — including the suicide bombers — were killed, and that the people who had been taken hostage within the directorate of electricity, located near where the clashes took place, were released. The attack, nevertheless, conveyed many messages, the most notable of which was that al-Qaeda sought to make Anbar a turning point in its regional battle on the Iraqi-Syrian border.

The local government in Anbar held security forces responsible for the incident, believing that the latter reflected bad security management, a lack of cooperation and weak intelligence efforts.

Sheikh Humaid al-Dulaimi, a prominent political figure in Anbar, spoke to Al-Monitor about these concerns. “Residents were informed that the ISIS wants to wage a war in Anbar. The organization began by testing the waters in the villages of Ana and Rawa, which were subject to attacks on Sept. 24 by a score of armed individuals in a bid to take over security centers,” said Dulaimi.

Then, on Oct. 15, similar attacks hit the village of Haditha.

Regardless of the results of these attacks, which did not achieve their announced goals of storming security centers, the escalation of attempts to occupy cities by taking over their security apparatuses constitutes a significant development in the nature of al-Qaeda’s activities in Iraq. For years, the organization’s conventional weapons consisted of car bombs and suicide attacks.

Dulaimi told Al-Monitor,  “The splits witnessed in Anbar since the eruption of anti-government protests on Dec. 23, 2012, the developments that came after the formation of the government-backed Sahwa organizations, led by Sheikh Wissam al Hardan — notably that former Sahwa leaders Sheikh Ahmad abu Risha and Ali al Hatem joined the opposition — in addition to the Syrian crisis, its repercussions and the bad security management are all factors contributing the latest collapses.”

Dulaimi affirmed that in recent days, al-Qaeda has been directly threatening Sahwa elements, their leadership and tribal chieftains, saying it will battle and exterminate them.

On Sept 13, the ISIS issued a statement about targeting the leader of the Sahwa, Wissam al-Hardan, noting that the light of the “first generation” of Sahwa has dimmed.

Anbar province encompasses about a third of Iraq’s land mass. The province shares borders with Syria, Jordan and Saudi Arabia and is considered a main gate for the ongoing war in Syria, especially since ISIS succeeded in taking control of many villages along the Syrian border in Anbar and Ninevah provinces.

In addition to the strategic advantage offered to al-Qaeda as a result to the collapse of the security situation in Anbar — in terms of opening borders between the two factions of the organization in Iraq and Syria and tipping the balance of the battle in both countries — the desert constituting a third of Anbar’s area is also considered a strategic location for the deployment of al-Qaeda. The organization takes advantage of the desert to train its members and hide its weapons and command centers.

For their part, security forces in Iraq are sensing the delicacy of the situation in Anbar. It seems that they have received credible information on the “huge battle” al-Qaeda is getting ready to wage. An informed source told Al-Monitor:  "Large military units equipped with shields and planes are intending to storm into the desert to look for training camps and stop the plans of al-Qaeda prior to their implementation.”

The military source did not specify the date of the new operation, but did not hide his command’s concern about the delicacy of engaging in open battle with fighters hiding in the far-reaching desert.

“It will not be an easy task; regular army forces are normally weaker in a desert setting. Additionally, the enemy is more acquainted with the routes and passages, and is more familiar with the map and secrets of the location,” the source noted.

According to the military commander, the alternative is no easier. He added, “Waiting for the enemy means giving them the right to choose the time and place to attack us. In that case, the battle will take place within the cities.”