Tenuous official accounts of what really transpired during the Abu Ghraib and Taji prison breaks leave many questions about the incident unanswered. 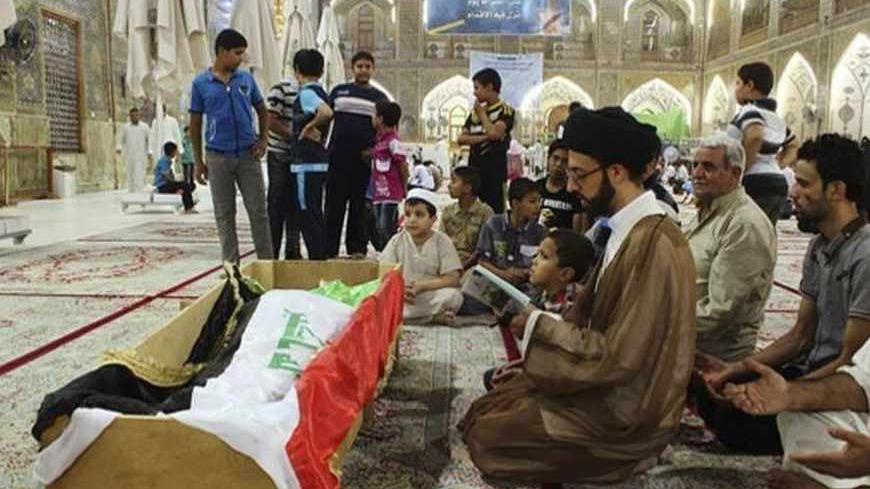 Mourners pray at the coffin of a victim killed during an attack on a prison in Taji, during a funeral at the Imam Ali shrine in Najaf, 160 km (100 miles) south of Baghdad, July 22, 2013. - REUTERS/Haider Ala

The attacks against the Abu Ghraib and Taji prisons on July 22 caused a shock at all levels. This requires recalculations not only to evaluate al-Qaeda’s capabilities, but also the Iraqi security efforts needed to combat this potential.

On the same day, websites close to al-Qaeda attributed the Abu Ghraib and Taji prison raids to the Islamic State of Iraq and Syria (ISIS).

This group was announced by the leader of the Islamic State of Iraq (ISI), Abu Bakr al-Baghdadi, after he revealed that his group had merged with the Syrian Jabhat al-Nusra in April 2013.

The number of escaped inmates ranged between 500 and 1,000, according to Hakim al-Zamili, a member of the Security and Defense Committee in parliament. He said that most of them were detained senior members of al-Qaeda, and that the operation was planned and carried out by al-Qaeda in a professional and precise way — continuing to prove that it has potential that exceeds the estimations of the security services.

One day after the incident, al-Qaeda claimed responsibility for storming the jails and issued a statement by ISIS saying that the attack was “in response to the call of the mujahid (holy warrior) Sheikh Abu Bakr al-Baghdadi to seal the blessed plan of ‘breaking the walls.’ The mujahedeen brigades set off after months of preparation and planning to target two of the biggest prisons under the control of the government.” It added, "Then, the mujahedeen brigades freed more than 500 inmates from the jails.”

The government statement that was issued one day after the incident was not without its surprises. The statement, which acknowledged that the attackers had coordinated and planned in advance, also talked about collusion between some of the jail staff and members of the group who attacked the prison.

This statement — which was issued by the interior ministry in the wake of the crisis cell meeting, headed by Prime Minister Nouri al-Maliki — said, “The jails were subjected to two preplanned terrorist attacks. They involved firing dozens of mortar shells at the prison buildings, suicide bombers wearing explosive belts and an attempt to break into [the prison] using car bombs, one of which targeted the main entrance of the Abu Ghraib prison, and another that was detonated at the second gate. Moreover, two car bombs targeted Taji prison in Baghdad, without any results [no prisoners escaped].”

The statement explained, “These attacks paved the way for terrorist gangs to storm into the mentioned prisons. Security forces rushed to establish a cordon around the scenes, impose strict security measures and control the security situation.” The ministry statement indicated that “security forces killed a number of terrorists outside the prisons’ boundary walls while they were attempting to storm in, and that a number of prisoners was prevented from escaping and attacking security forces.”

The statement said, “The incident resulted in a number  of inmates escaping Abu Ghraib, whereas none of Taji’s inmates managed to do so, as security forces prevented them from escaping.” It added, "The pursuit is underway to find escapees from Abu Ghraib, and that security forces called on the people to cooperate and notify them about escaped inmates.”

“A preliminary investigation conducted by the crisis cell proved that there had been collusion between some of the correctional guards and terrorist gangs that attacked the prisons,” the statement continued. “The crisis cell set up a higher committee comprising the concerned parties and relevant departments to diagnose the causes of the incident.”

In a news conference on July 23, Maj. Gen. Hamed al-Mousawi, director of the correctional department responsible for Iraqi prisons, said that in conjunction with the storming, riots took place within the prison yard accompanied by a sudden electricity cut. [He added], “Eight Iraqi correctional department staff were killed and 14 were injured, in addition to 21 inmates killed and 25 injured.”

Nevertheless, information obtained by Al-Monitor from government sources confirmed that dead and injury figures in the incident exceeded the number announced by Mousawi, and that the ISI minister of war, Adnan Ismail Najim Abdullah al-Dulaimi — also known as Abdul Rahman al-Bilawi — is among the escapees from Abu Ghraib.

The conflicting information on the incident is justified, given that Iraqi security forces and intelligence agencies responsible for retrieving information are unable to anticipate such attacks, despite that prisons have always been a central target for al-Qaeda.

It should be mentioned that Baghdadi announced on July 22 the operation named “breaking the walls” to free the group’s imprisoned members, and that the attack on Abu Ghraib was implemented on the same day as that announcement.

It is not a coincidence that these incidents occurred simultaneously. The date on which the operation was undertaken represented a message carrying a lot of challenges for Iraqi security forces, which seem to have completely neglected the interpretation of this date and the possibility of launching major operations on it. And they did not figure out the time link between the two incidents, even after the Abu Ghraib and Taji operations were begun.

The plan adopted by the attackers was on a large scale and required huge, potential, well-considered moves and an active presence on the ground.

An Iraqi security commander described the operation’s details to Al-Monitor on July 23, saying, “It was terrifying.” It started on the night of July 22, with the firing more than 100 mortar shells at the prisons from various directions. Simultaneously, large-scale attacks targeted military units positioned close to the prisons, to preoccupy them and push them to move to positions farther away. Then, at least four car bombs detonated simultaneously at the prisons' gates, before suicide bombers entered. At the same time, inmates affiliated with al-Qaeda set fire to blankets and caused disorder and riots to distract the guards and facilitate an exit to the external yard, before breaking through the prisons' boundary walls.

The instability that accompanied the storming of Abu Ghraib raises questions that deserve consideration as an introduction to understand the nature of the way in which Iraqi security forces think.

First of all, how did the attackers manage to time the zero hour of their operation with the moment their leader announced the “breaking of walls” campaign, which he said will continue for a year? Does this mean that the day the operation was executed was the official end of the “breaking of walls” campaign [despite Baghdadi’s statement that it would continue for a year? Does this indicate that the terrorists knew that members of Iraq’s security and intelligence forces would never think that operations could occur on the exact day the operation was announced?

How did the attackers manage to fire 100 mortar shells on the two prisons in less than one hour? Such shelling potential needs an army, not just scattered and hidden fighters, as mentioned in official statements.

How did the prisoners manage to leave their prison cells and escape, knowing that the operation was carried out in the evening? And according to prison protocols across the world, prisoners are supposed to be in their cells in the evening after being counted. Prison administrations only allow prisoners to go to the courtyards in the morning.

How many prisoners actually escaped from prison? With the exception of Zamili’s announcement that between 500 to 1,000 prisoners escaped, there are no clear and formal announcements about the number of fugitives, and media outlets are publishing various numbers that reach asmany as 3,000. So is there a problem in determining the number of inmates to begin with? Or to enumerate their names? Is there a problem in identifying the names of the actual fugitives?

How did the attackers manage to distract large military units that are estimated to include two military divisions located near the prisons? What could have possibly been so important to distract these divisions? What kind of information was leaked to them to distract them?

How did nine suicide bombers only — according to official reports — manage to storm a prison like Abu Ghraib, knowing that it spans more than 1.15 square kilometers [345 acress, or about half a square mile] following its expansion and the major security barricades that were added to it since its inception in the 1950s?

Those questions — among many others — will remain unanswered, and it is only normal that official justifications find many reasons to break into the two prisons, and that they put the blame on the complicity of guards or on foreign plans. This does not exclude facts on the ground that raise suspicions about the efficiency of the Iraqi security forces, knowing that 10 years of continuous war with armed groups on the ground are supposed to have earned these forces exceptional experience.