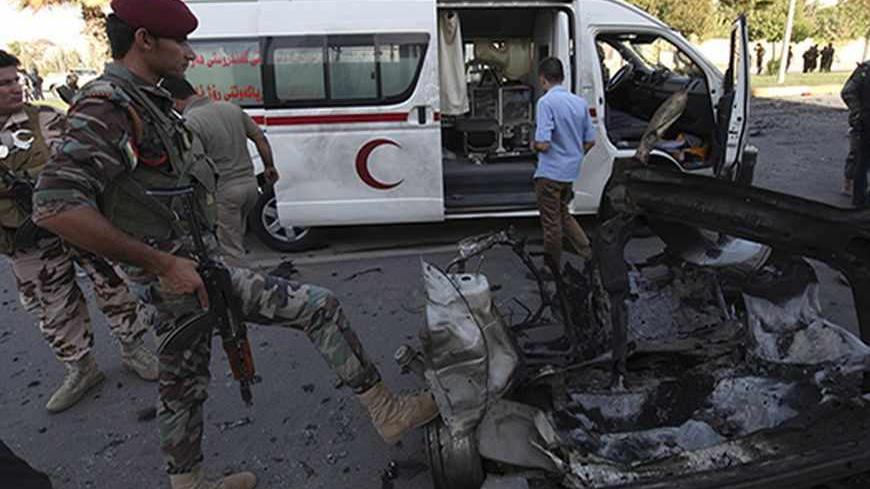 Kurdish security forces inspect the site of a bomb attack in the city of Erbil, the capital of the autonomous Kurdistan Region, Sept. 29, 2013. - REUTERS/Azad Lashkari

ERBIL, Kurdistan Region of Iraq — On Sept. 29, the Directorate of Security (Asayish) in Erbil became the target of a successful suicide attack and another that failed. According to a statement by the directorate, six security officers were killed in a firefight that followed the attack, and 62 people were injured, including 42 security and police officers. It is the first attack in six years in Erbil in the Kurdistan Region of Iraq. The region is known for its stability and security — in contrast to the rest of Iraq, where attacks are frequent — and has attracted impressive amounts of foreign investment.

The Asayish statement noted, “The attacks come at a time when Kurdistan has achieved another democratic milestone by holding its fourth free and fair parliamentary elections [on Sept. 21], the results of which were announced one day before the terrorist attacks. The attacks demonstrate that there are those who stand against our democratic journey.”

In the first attack, a suicide bomber attempted to drive into the Asayish building, killing four people when the vehicle exploded. Minutes later, an ambulance carrying two assailants approached the building, but they were stopped and killed.

“For many years, the city Erbil has benefited from peace and security, and I urge the regional and national authorities to work together to ensure that calm and tranquility will continue to prevail and that those responsible for the attack are brought to justice," said Nickolay Mladenov, UN special representative of the United Nations secretary-general for Iraq.

Asayish is still investigating the incident and has not yet announced who it thinks, apart for "terrorists groups," is responsible for the incident. Kurdistan Regional Government (KRG) President Massoud Barzani visited the victims of the attack in the hospital.

There are several organizations that could be behind the attack. A large number of Islamist organizations have emerged in the Iraqi Kurdistan Region since the 1980s. Some of them carried out attacks, but the majority decided to participate in the electoral system after Kurdistan became de-facto autonomous in 1991.

Ansar al-Islam, formed by the merger of several insurgent groups in December 2001, has in the past carried out attacks and assassinations in the area, but in 2003, US Special Forces and fighters from the Patriotic Union of Kurdistan (PUK) destroyed the group's bases in Halabja. Taka Kamran, a former leading member of Ansar al-Islam, told Al Arabiya on July 22, 2011, “After the US forces entered the country in 2003 and bombed us for 13 days running, we went to Iran and then returned to Baghdad.”

After 2003, Ansar al-Islam, changed its name to Ansar al-Sunna and became one of the main Iraqi insurgent groups in the country, competing with but also cooperating with al-Qaeda. In 2007, the group reverted back to Ansar al-Islam. In February 2004, it killed 105 people in simultaneous suicide attacks in Erbil.

Another group, the al-Qaeda Kurdish Battalions, which swore allegiance to al-Qaeda and al-Qaeda in Iraq, carried out several attacks after its inception in 2007. A Stanford University profile says of the organization, “Considered weak in number and capability, the group has not carried out an attack since late September 2010, when a bomb went off while being defused in Sulaimaniyah, Iraq, wounding two police officers.”

The al-Qaeda Kurdish Battalions were designated a foreign terrorist organization by the US State Department in January 2012. It was responsible for truck bombing the building housing the Ministries of Interior and Security in Erbil in May 2007 in which 19 people were killed. It also killed seven border guards and one security officer in Penjwin, near the Iranian border, in July 2007, and two police officers were hurt in a failed suicide attack in Sulaimaniyah.

Sources claim the al-Qaeda Kurdistan brigade had pledged allegiance to Abu Umar al-Baghdadi, the Islamic State of Iraq (ISI) leader killed by US forces in April 2010 and replaced by Abu Bakr al-Baghdadi. In April 2013, ISI became the Islamic State of Iraq and al-Sham, operating in Syria and in Iraq. Since mid-July, it has been involved in fighting the secular Kurdish People’s Defense Units (YPG), affiliated with the Kurdistan Workers Party (PKK).

In April 2013, President Barzani vowed to assist Syrian Kurds against al-Qaeda, following reports of Kurdish civilians being massacred in the countryside of Aleppo, in Syria. The PKK-affiliated Democratic Union Party (PYD), the main Syrian Kurdish party, has, however, rejected military assistance from Barzani. Nevertheless, it remains possible that the al-Qaeda outfit suspects Barzani of supporting the Syrian Kurds against them.

Iraqi Prime Minister Nouri al-Maliki and Barzani reached an agreement in May on forming a security committee to coordinate between the Iraqi government and Kurdish forces. On January 18, 2007, ISIS released a statement threatening Kurdish Peshmerga assigned to participate in the Baghdad security plan. Moreover, Al-Furqan, the media arm of al-Qaeda, released a video in 2010 called "Vanquisher of the Peshmerga" that was translated by the Ansar al-Mujahideen English Forum.

The late ISIS leader Abu Umar al-Baghdadi, said, “Not long ago, their grandfathers [Kurds] were praised with the scale of Sharia; and today things are reversed, and their politicians are the ones who allow the reign of the rejectionists on the Land of the Two Rivers [Iraq].”

An unofficial Twitter account attributed to Jabhat al-Nusra tweeted, "ISIS: four car bombs shake Arbil; north Iraq; response to what they're doing in ash-Sham [Syria]. Allahu Akbar," possibly referring to the fighting between the Kurds and jihadis in Syria.

Mohammed Baziani, an Islamic researcher and head of the al-Huda Center for Strategic Studies based in Erbil, told Al-Monitor that he does not think Ansar al-Islam is behind the bombing.

“The style of the explosion looks like al-Qaeda. It doesn’t look like what in the past Ansar al-Islam has done. Ansar al-Islam is not powerful enough to do it, to do this kind of explosion in Kurdistan. As a researcher, I don’t have proof, but this is my opinion. I think it belongs to a branch of al-Qaeda.”

The US Consulate in Erbil said it is monitoring reports of the attack. “The United States will continue to support the Kurdistan Regional Government, the Government of Iraq, and the people of Iraq in combating our common enemy of terrorism,” a US press release announced.

Hemin Hussein Hamawandi, an Erbil-based journalist, does not think the attack will make a huge impact on Kurdistan’s security going forward and might be a message from regional countries against the recent democratic elections.

“We passed this step [of insecurity]. We will never return to the past. All the people in Kurdistan help the security system, and security forces, and the KRG has full support for anti-terrorism.”