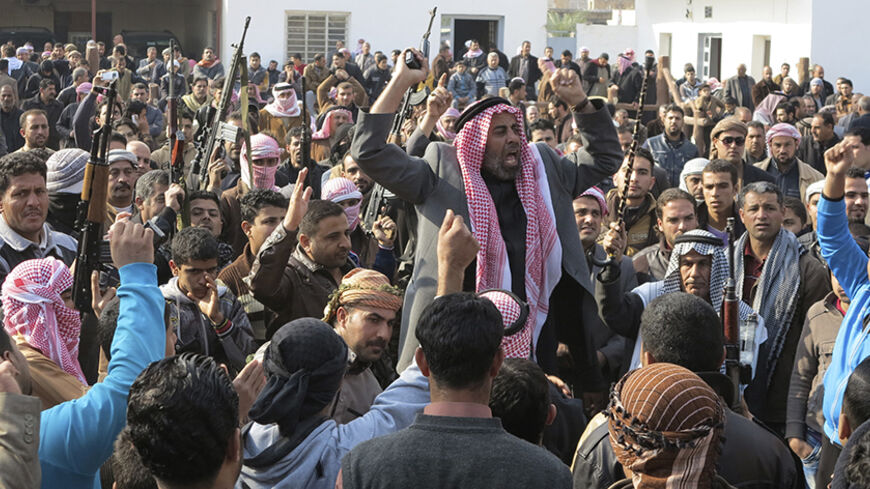 Although the Islamic State in Iraq and al-Sham (ISIS) is trying to exploit the “Sunni cause” to mobilize its fighters and rally supporters, its “jihadist” characteristic reduces its claim to represent the Sunni community to a small segment within this community.

Most Sunnis maintain their suspicious view of the Shiite-dominated government in Baghdad, but they do not see ISIS as a good alternative. It is true that ISIS has largely invested in the sectarian tension in Iraq and the region, but its objectives go beyond the Iraqi borders or the major concerns of Iraq’s Sunni community. Through its simultaneous involvement in Syria and Iraq, ISIS established its distinct entity and identity with an agenda that is largely indifferent to Iraqi politics.

However, fighting ISIS has yet to become a Sunni priority. One reason is the growing strength of the organization and its proven ability to carry out revenge against “traitors,” as was the case with the assassination of Khamis Abu Risha, a leader in the anti al-Qaeda awakening groups (Sahwa) which previously were a key voice in the anti-government rallies in Anbar. Second, the Sunni elite is divided and increasingly incapable of determining its communal priorities, and some of its members think that the main problem lies in the policies of Prime Minister Nouri al-Maliki’s government.

Sunni divisions and rivalries have complicated the efforts to maintain the gains that Sahwa groups have achieved in their previous fighting against al-Qaeda in 2008. Tribal sheikhs in Anbar and other areas competed for influence and state patronage, and this affected their relations with the government. Because of Maliki’s failure to build a strategic framework to sustain Sahwa’s previous gains, some of its leaders, including Ahmed Abu Risha, turned into opponents of his government. Others tried to build ties with the government to gain more leverage with their local rivals.

Relations with Sahwa groups became more about politics and patronage than security, which led to a continuous shifting in the loyalties of the tribal sheikhs. Sheikh Ali Hatem Al-Salman of Duleim (the largest tribal congregation in Anbar) was a member in Maliki’s coalition in the 2010 elections before he turned into one of Maliki's most unreserved opponents and the spokesman of the anti-government Tribal Revolutionary Council of Anbar, which was formed to fight Iraqi security forces after they dismantled protesters' camps at the end of December 2013.

In a statement that followed reports on negotiation between him and Iraqi officials, Salman slightly tempered his critical attitude toward the Iraqi government, and instead accused Abu Risha and Anbar’s governor of causing the current security crisis in the province. Abu Risha now is an ally of the Iraqi government, which he previously criticized for marginalizing Sahwa groups and for adopting sectarian policies toward the Sunni community. As Sunni leaders were continuously shifting loyalties in their competition for state patronage, it became difficult to secure a sustainable security strategy in fighting against ISIS.

In addition, the loyalty of tribal sheikhs is not always a sufficient guarantee, particularly in areas where the influence of tribalism is limited. In Fallujah, for example, the influence of radical clerics seems to exceed that of tribal chieftains, especially because of the increasing Salafization in the city. Salafist jihadist attempts to fill the vacuum resulted from the decline of tribalism and the weakness of national identity. Following the Iraq war and as a result of the heightening sectarian hostilities in the region, Sunni identity has been subject to a process of “reinvention” that evoked some Salafist beliefs, especially those that deemed Shiism as “deviance” and a major enemy. The transnational sectarian solidarity that jihadist Salafism called forth has become an important factor in the rise of ISIS.

The Iraqi government holds the greatest responsibility, of course. Maliki tried to weaken strong Sunni leaders, deprive the Sunni population of legitimate and reliable leadership and empower those who are personally loyal to him. He prioritized his political calculations over the need to integrate the Sunni population in the political process and guarantee their right to have legitimate representation. This policy has been relatively successful, as was shown by the results of the last parliamentary elections that produced a fragmented and manageable Sunni political map.

The low level of coordination between Baghdad and Sunni provincial administrations, especially in Mosul, led to further deterioration in the security situation. Mosul’s governor, Atheel al-Nujaifi, has repeatedly complained about the lack of cooperation by the Iraqi security forces and their sectarian leanings. He demanded the delegation of security responsibilities to the province and local police which, he argued, better understand Mosul’s conditions and social fabric. Conversely, the Iraqi government accused his administration of opposing the efforts of the Iraqi security forces to impose full control over the province. Local police were also perceived as actual or potential collaborators with ISIS and other radical Sunni organizations. Mutual accusations resurfaced because of the success of ISIS in controlling Mosul.

This politicization of the security challenge keeps hampering the efforts to stabilize the country and defeat the extremists. The state needs to build a broader legitimacy and secure a credible representation of citizens and local communities in its institutions. Maliki is increasingly resorting to patronage in his attempts to encourage local elites and populations to support government forces in the fighting against ISIS. However, this is not the perfect tool for two reasons. First, Maliki is using it politically to weaken his opponents and empower his loyalists, sometimes even at the expense of elected politicians who consider themselves the legitimate leaders of their communities. Second, patronage is by definition a discriminatory instrument that privileges those who are close or have access to the “patron”.

There is a need for institutional solutions aiming at broadening the state’s legitimacy by emphasizing its neutrality rather than its preferences. Maliki’s recent call for a conference to discuss the situation in Anbar could have been better received had the prime minister involved major political actors and institutions in his plan. Heading a hypothetically caretaker government and making individual initiatives to win over the support of selected Sunni leaders seem to indicate that Maliki is still thinking with short perspective and perhaps is incapable of developing a more institutional approach. Without reaching a new compact that reforms the system of government and seeks a broader legitimacy for the state, Iraq’s future as a united country remains uncertain.