As Iraq continues to struggle with widespread anti-government protests, the prominent Sunni Iraqiya list has gone through a series of defections that have dealt a serious blow to its influence, writes Ali Abel Sadah. 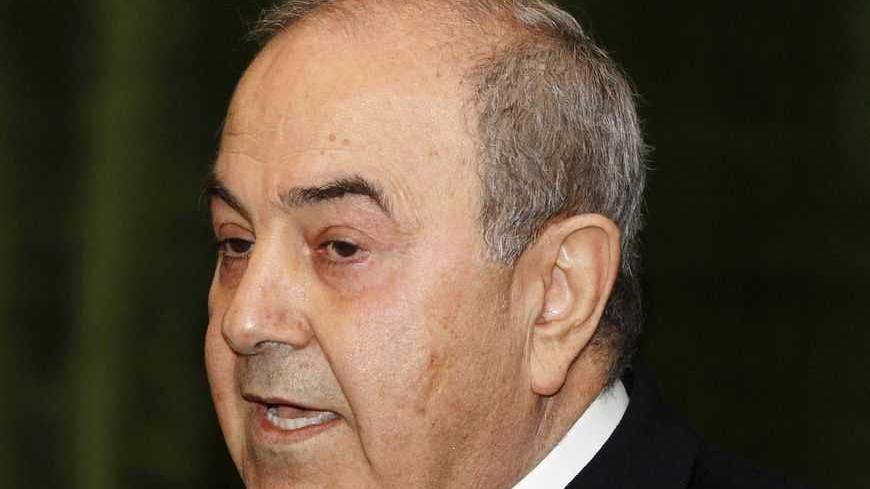 Sunni politicians of the Iraqiya list, led by Ayad Allawi, have deemed Saleh al-Mutlaq, head of the Iraqi Front for National Dialogue, a traitor, particularly since he shifted his stance on Prime Minister Nouri al-Maliki, recently decided to return to the cabinet, and held ministerial seats that once belonged to the rest of the Iraqiya factions.

Yet, the exchange of accusations between Sunni leaders in Iraq does not eliminate the bitter truth, from which the political faction that represents them has suffered for years. Since the 2010 legislative elections, the Iraqiya bloc has sustained harsh blows and defections that have undermined its strength in the face of its Shiite rival, Maliki.

Haidar al-Mulla, a leader from the Iraqi Front for National Dialogue, led by Mutlaq, was clear in a new conference that Al-Monitor attended, saying: “The Iraqiya bloc is dead.”

Mulla, a spokesman for the Iraqiya bloc, believes that religious forces seized control of decision-making in the list. In light of the almost total absence of secular leader Ayad Allawi, Islamist leaders — which took the reins of the bloc — have emerged. Among them: Rafi al-Issawi, a leader of Hamas al-Iraq, and Osama al-Nujaifi, who has a devout Sunni audience in Iraq.

Mulla’s news conference was the latest indication of the fragmentation of the Iraqiya bloc. It was one of the few times journalists have listened to Mulla as he spoke candidly of the Allawi bloc’s political situation. Mulla talked about the death of the Iraqiya List a few hours after Mutlaq, and Sunni ministers of education, Mohammad Tamim, and industry and minerals, Ahmad al-Karbouli, returned to cabinet.

In parallel, the government announced having decided to include the Sunni politicians that returned to the cabinet in the ministerial committee in charge of examining demonstrator demands, approving the draft law on seized and confiscated movable and immovable property of the former regime figures, and submitting it to parliament.

Mulla said: “Within the Iraqiya List, there is a sort of division around the national project that seeks to preserve Iraq’s unity and combat political sectarianism, as well as a divisive sectarian project, led by the neo-Islamists, who seek to mislead some tribes and religious men in order to garner their support.”

Maliki finally took advantage of the division in the Iraqiya list, and brought back Sunni leaders Saleh al-Mutlaq and Jamal al-Karboli to the cabinet meetings.

Sami al-Askari, a senior Shiite politician from the State of Law Coalition, says: “What might be called Maliki's success in the recent political crisis goes back to controlling the keys to the political game on the one hand, and taking advantage of opposition weakness and fragmentation on the other. The Allawi Iraqiya list suffers from internal crises, and is characterized as a dead political bloc.”

Mishan al-Saadi, a leader from the Iraqi Front for National Dialogue, says: “The Iraqiya list no longer exists in reality, and has presently turned into three blocs, as a result of political secessions in recent months.”

Mutlaq’s move opened the Pandora’s box of differences between the Iraqiya leaders.

Amid all these differences, the Iraqiya list said in an official statement issued Wednesday [March 27] that the return of Mutlaq to the recent cabinet meeting is designed to undermine the national front. The list called on Mutlaq to reconsider his calculations and alignment with his people in the Iraqi street, in a reference to Iraqi Sunnis.

The Iraqi government held a special meeting to discuss demonstrator demands in the cities of Ramadi (west) and Mosul (north). The meeting came at the request of Mutlaq and Karbouli to have official guarantees that Maliki would implement “the demonstrators’ legitimate demands.”

In its statement obtained by Al-Monitor, the Iraqiya list called on Mutlaq “not to be a false witness of the current government’s approach for division, marginalization and political sectarianism.” The Iraqiya confirmed that “the political process in Iraq is moving in a dangerous direction, after Maliki monopolized political and security decision, and threw out the principle of national partnership, which was established by the government.”

The Iraqiya list is in a very bad situation. From a practical point of view, its political forces are distributed over three different factions, after secessions.

These factions: the Iraqiya al-Arabiya [the Arabic Iraqiya], which includes the Solution [al-Hal], led by Jamal al-Karboli; the Iraqi Republican Assembly, led by Saad Asim al-Janabi; and the Iraqi Front for National dialogue, led by Saleh al-Mutlaq.

Moreover, there is the Free Iraqiya, which includes MPs who have taken personal issue with Allawi, and Maliki benefited from their services. The third faction is represented by Allawi, through his traditional contingency known as the National Accord Movement.

by Murielle KASPRZAK and Joseph SCHMID | AFP | May 26, 2022
END_OF_DOCUMENT_TOKEN_TO_BE_REPLACED