As a united Sunni coalition has failed, Iraq's Sunni political forces have divided into several alliances, each hoping to win as many parliamentary seats as possible and occupy the position of "Sunni leadership" for the next four years. 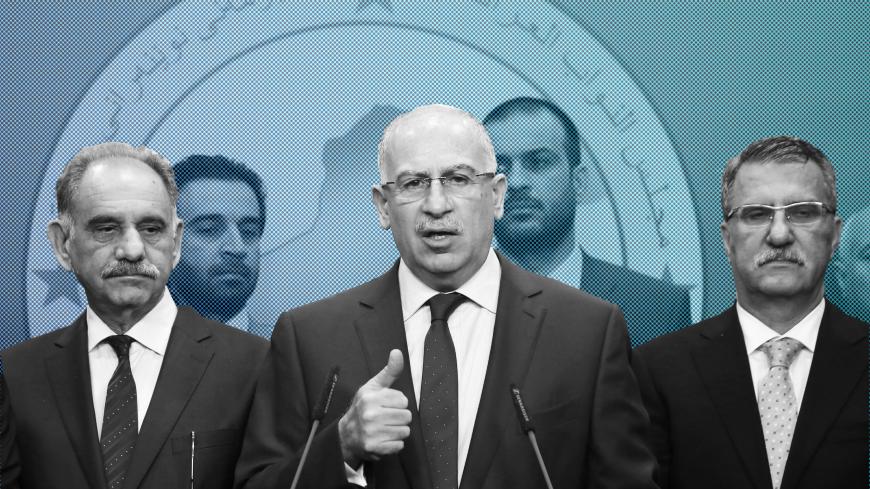 BAGHDAD — Out of the 27 alliances registered with the Independent High Electoral Commission for the upcoming Iraqi general elections set for May, around 10 alliances represent the Sunni community. In fact, most of these alliances used to be part of the Coalition of Iraqi Sunni Forces.

Although the parties organized conferences last year, namely in Ankara and Oman, with the support of some Arab countries and Turkey in the hopes of uniting the different Sunni parties and establishing a common political project, they were not able to form an inclusive political coalition. There were many reasons behind this failure, namely the “struggle for power,” as Dhafer al-Ani, a leader in the Iraqi Decision Alliance, expressed.

Ani told Al-Monitor that the “conferences held by Sunni parties over the past period aimed at a unified Sunni project, yet this project could not be completed because of the current divisions between the Sunnis in power and those of the opposition.”

He said, “The main reason for these numerous Sunni electoral alliances is the struggle for power because many political figures consider that they should preside over coalitions and electoral lists. So if they are listed toward the end of a list, they perceive it as a threat to their popularity and what they represent.”

Ani explained, alluding to the presence of the Popular Mobilization Units in the Sunni provinces, “This dispersion could be as healthy for Sunnis as it is for Shiites and Kurds. For the latter, the dispersion of large confessional clusters resulted in less foreign interference in forming coalitions. Yet what worries the Sunnis is the irregular situation in the regions freed from the Islamic State [IS] and the presence of arms that could negatively influence the integrity of the elections.”

While the Iraqi Decision Alliance strictly includes purely Sunni parties, other important parties have chosen to incorporate mixed coalitions such as the National Coalition under liberal Shiite leader Ayad Allawi, who led the majority of Sunni forces in 2010. The major parties joining the National Coalition are the Al-Arabiya Coalition led by Mutlaq, the Civil Society for Reform party led by Jabouri and 14 other Sunni parties from northern and western provinces.

Despite that, member of the National Coalition Abdul Karim Abtan refused to describe the coalition as “a sectarian coalition that has lost its liberal identity.” He told Al-Monitor, “The coalition has tried to join all Iraqi parties that had undergone elections with it in 2010.”

When it comes to leaving out major Shiite parties and the coalition with Nujaifi or Khanjar, Abtan noted, “The dispute on the ranking of candidates’ names on electoral lists is the main reason behind this outcome. Despite that, the talks about expanding the National Coalition to include a greater number of parties have ended.”

Abtan dismissed the possibility “of having regional interference on how Sunni coalitions are mapped out.” He expressed his concern about the possibility of “creating obstacles to the return of refugees, endangering the stability of liberated cities and disabling the disarmament process for the parties participating in the elections as this would lead to a change in the political representation of factions.”

The Solidarity Coalition led by Sadid, an unknown tribal figure in the political arena, also includes Amal al-Iraq and Iraq Hawiyatouna. None of these parties participated in the elections in the past. Therefore, expecting them to win parliamentary seats is far-fetched, especially since other Sunni alliances were formed to enter the elections in certain districts such as Salahuddin, Diyala and Anbar. These alliances include well-known political parties and have sufficient experience to get the largest number of votes, such as Al-Hal led by Jamal al-Karboli and Al-Wafa led by Qasem al-Fahdawi.

If suitable circumstances are met in the areas liberated from IS and if all Sunni parties managed to get the usual number of seats in each electoral round (80-90 seats), they will face the same test that other alliances are facing. They will have to work as national lists and ally together based on similar electoral programs and common goals as well as based on their sect. The speaker of parliament will be Sunni, as has always been the case.

The current chasm most probably stems from political reasons aiming at testing candidates’ popularity in the elections. The alliance that receives the most votes will get the key positions that are the Sunnis’ share. The way candidates were distributed in the lists and leaders were chosen have played a part in forming the map of Sunni parties and alliances that will participate in the upcoming elections.

The lack of secular parties participating in the elections has made it more difficult to form interreligious lists. The lists include a few figures from other sects at best and are not made up of national parties. The sectarian division persists even within the same coalition or list, thus affecting the distribution of positions later.