Four months into their demonstrations, the protesters of Anbar have formed a committee to negotiate with Prime Minister Nouri al-Maliki and enter the political process, writes Ali Abel Sadah. 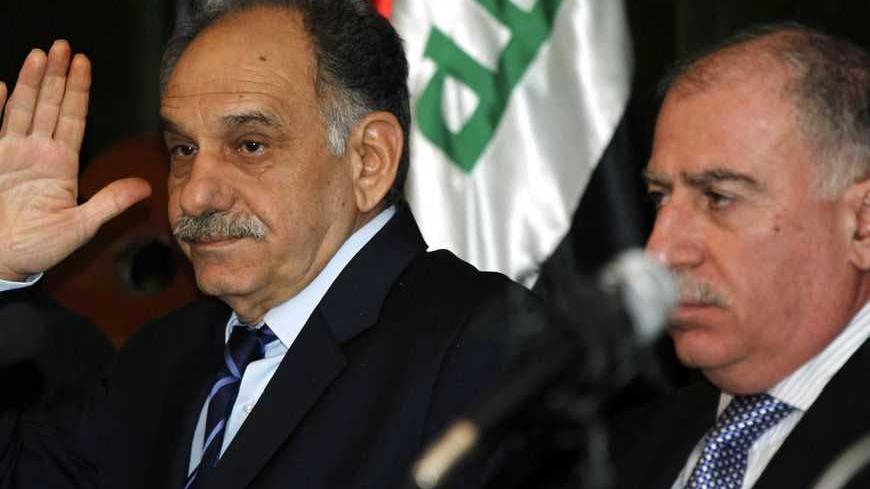 Protesters in Anbar province who are angry at Prime Minister Nouri al-Maliki have finally decided to form an official delegation to discuss their demands with him. These demands mainly consist of putting an end to what they describe as “Sunni marginalization,” as well as stopping the use of the security services to hit Sunni figures and leaders in the country.

Sheikh Saeed Lafi, a spokesman for the Anbar demonstrators, said on March 24 that they had formed a delegation to discuss their demands with the government.

Lafi, who spoke with Al-Monitor over the phone, said: “The delegation members are known by the people of Ramadi, that their names will be announced and that naming known people would stand in the way of mediators.”

Forming the negotiating delegation will provide the protest against Maliki with additional strength. As Lafi says, it will put "the ball in the government's court. Thus, the government will not have any excuse or pretext [for not discussing the demands]. I hope this step will be a good start to end the crisis.”

But what is the significance of forming a delegation of demonstrators four months into protests against Maliki’s government? In general, the move shows that the Sunni demonstrators are fed up with the political blocs that have represented them recently. These blocs have negotiated with Maliki, but to no avail.

Parties belonging to the Iraqiya list, led by Ayad Allawi, offered to be fierce advocates of the demonstrators' demands, but the split in the Sunni forces weakened their position, thus enabling Maliki to outdo them.

Moreover, the Iraqiya list has recently endured somewhat of a split following allegations that Saleh al-Mutlaq — a Sunni leader who heads the National Dialogue Front — accepted a tempting offer from Maliki to return to the government and occupy the ministerial seats left by forces allied with Mutlaq and affiliated with the Iraqiya list.

Mutlaq did not explicitly announce that he had accepted the offer, whereby he would be the defense minister with restricted powers, as required by Maliki, but according to leaks stated by a senior political source to Al-Monitor, Mutlaq is waiting for the right time to make this announcement, and the deal is ready for implementation.

Maliki hit two birds with one stone: The first is that he got a big award from Mutlaq, whom he will see as a lifeline for his government, which lacks 20 ministers, and the second is that he succeeded in penetrating and splitting the Sunni front.

Saad Hamid, one of the organizers of the protest in Ramadi and a student at al-Madina University, said the protesters consider Mutlaq a traitor.

The demonstrators have waited long for tangible results from the activity of Sunni parties, especially considering that a number of Sunni politicians were members in the committees formed by Maliki to consider the protesters’ demands.

Maliki announced last January the approval of a five-member committee as a political entity that has an advisory mission and that is tasked with finding a consensual approach to meet the demands of the demonstrators.

The committee included the Iraqi National Accord, which is led by Allawi and represented by the politician Hassan Chuird; the "Solution" movement, which is part of the Iraqiya list and is represented by Qais al-Shazar, head of the Parliamentary Reconciliation Commission; "the Kurdistan Alliance," which chose Kurdish politician Mohsen al-Sadoun, while one of the "rule of law" hawks, Khalid al-Attiyah, represented Maliki's point of view in the committee. The prime minister got the fifth member, who is the leader of the Badr Organization; and the Transport Minister Hadi al-Amiri, an offshoot of the Islamic Supreme Council.

But until now, Maliki seems to be only using these committees to gain time and maneuver. The prime minister is waiting for the official delegation of the Anbar demonstrators, and the news of its official formation — away from the traditional Sunni political forces — may not be quite pleasant for him.

He is actually confronting people from the heart of the sit-in square, and these will come to government offices, fed up and sick of the maneuvers he has been carrying out in recent months. This means that the leader of the Islamic Dawa Party has a difficult test to take, and he has to be willing to prove that he is credible.

In contrast, Maliki has a chance to kill the feeling of Sunni isolation and marginalization if he offers them a satisfactory deal.