Shiite leader Muqtada al-Sadr has issued a  warning to Iraqi Prime Minister Nouri al-Maliki to withdraw militants from the streets amid a series of devastating car bombings throughout Iraq. 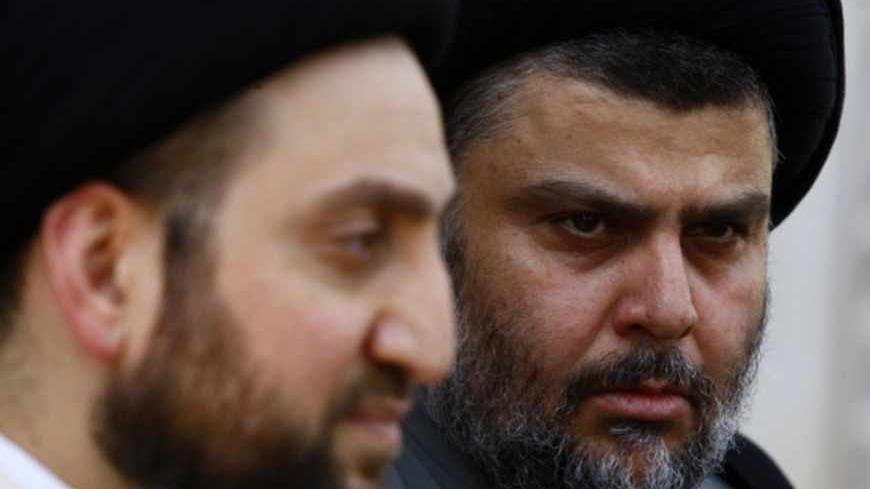 What did controversial Iraqi Shiite leader Muqtada al-Sadr mean when he issued on May 27 “a final warning to the government to assume its duty of protecting the people"?

Political observers in Iraq were expecting one of the most prominent Shiite leaders opposed to Prime Minister Nouri al-Maliki to leave the Iraqi National Alliance, and [thus] end the political majority of the Shiite forces in the country.

Sadr's call came after a series of bloody acts of violence, including 10 car bombs that targeted Shiite neighborhoods in the capital and resulted in the killing of at least 70 people. Sadr said in the statement that "terrorism has influence and control in Iraq. They (militants) frequently step up their bombings, which are met by mere condemnation or silence by all parties."

He added that "the people are now without a government to protect them and are facing terrorism without help from anyone." The Shiite leader called on Iraqis to “eliminate hatred from the hearts, defuse sectarian rancor, and return to God."

"As for the government, it must prosecute and expel incompetent and disloyal members of the security corps who are only after power and recognition,” he added.

This is not the first time that Sadr has given advice to the Maliki government on security issues. In his latest statement, he reiterated his call for "[the need to] consolidate intelligence efforts by using the correct methods and working hard to defuse sectarian tension."

However, Sadr’s statement clearly indicated that Maliki wants to engage in an internal war in the country. He said, "We have learned that the prime minister wants to declare the start of a sectarian war in Iraq."

Sadr called on the government to "unite [political forces], but not through banquets and economic forums attended by Israelis, but purely national meetings which I have called for and accepted to attend."

Sadr concluded his statement and calls for the people and government by saying: "This is the last call I make to the people on one hand, and the government on the other hand. Forewarned is forearmed. Oh God, I have warned."

Sadr's position coincided with security developments that followed a series of bombings. Armed men deployed in towns in central Baghdad and its suburbs. Eyewitnesses and security sources provided conflicting accounts regarding the identity of the gunmen, but some stated that they belong to the Asaib Ahl al-Haq.

Asaib Ahl al-Haq is an insurgent group that defected from the Sadrist current about five years ago. Last year, Qais al-Khazali, the group’s leader, expressed [favorable] positions toward the prime minister and declared that [his group] was defending the Shiites in Iraq. This raised the concerns of Sunni parties in the government.

In his statement, Sadr gave Maliki an ultimatum, calling on him to withdraw the Asaib Ahl al-Haq militants from the streets of Baghdad within 24 hours.

A senior security source in the Ministry of Interior told Al-Monitor that “special forces deployed in the streets of Baghdad, following news about the spread of militants in some towns. But he denied knowledge of who the insurgents are affiliated with."

Sadr’s warnings were immediately accepted by the Sunnis. The protesters in Anbar "welcomed" Sadr’s "ultimatum to Maliki to withdraw the Asaib Ahl al-Haq militias" from the streets of Baghdad.

Abdul-Razzaq al-Shammari, spokesman of the political bureau of the protest square in Ramadi, said that the protesters "support the step taken by Muqtada al-Sadr." In an interview with Al-Monitor’s correspondent, he said that "all Arab religious and social authorities and tribal leaders in the southern provinces should take a similar step before a human catastrophe happens in Baghdad." He said that the militias are still committing criminal acts in Baghdad.

The Iraqi public is accustomed to strong statements by Sadr against his Shiite ally and rival Maliki. However, their strategic alliance has never been broken since the formation of a Shiite-dominated government as a result of the alliance between the Dawa Party and the Sadrist movement. Still, this does not mean that Sadr is not considering overthrowing Maliki, and the security deterioration may be an opportunity to do that.

Maha al-Douri, a Shiite politician in the Sadrist movement, called on Maliki to resign as prime minister.

Douri told Al-Monitor, "Maliki has two options, either to step down or [waive the post of prime minister] to a Shiite figure in the Iraqi National Alliance." Douri said this would "spare the bloodshed of Iraqis."