Many Iraqi Shiites are joining the fight in Syria, by first receiving weapons training in Iran and then traveling to Lebanon, from where they are taken to Damascus by Hezbollah. 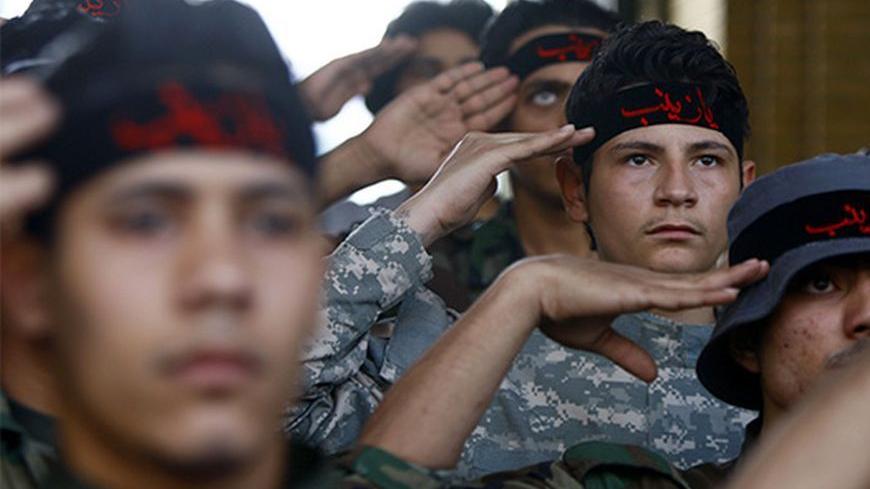 Iraqi Shiite fighters salute to the shrine of Sayyeda Zeinab, the granddaughter of the Prophet Muhammad, in Damascus, May 25, 2013. - REUTERS/ Alaa Al-Marjani

On his Facebook page, Saad al-Matlabi — a member of the Baghdad Provincial Council from the State of Law Coalition — appeared happy to see a video showing the arrival of  a leader of the Asaib Ahl al-Haq militia, Mohammad al-Tabatabai, to fight in Syria.

Matlabi commented on the video, “May God greet everyone who cares about our holy places, may God have mercy on the soul of our martyrs and may God bless all resistors fighting terrorism and al-Qaeda.”

Immediately after the outbreak of fighting between the Syrian opposition and the regime in 2011, the former accused Sadrist leader Muqtada al-Sadr of sending fighters to Syria to support the regime of President Bashar al-Assad. But the Iraqi government quickly denied that Sadr was involved in the Syrian crisis, emphasizing, “Iraq is keen not to be a party to the conflict in Syria.”

After more than two years of fighting between the opposition and the Syrian regime, and the evolution of the conflict into a civil war in some areas in Syria, the Iraqi government led by Prime Minister Nouri al-Maliki acknowledged that Shiite militias are fighting in Syria on the side of the Assad regime. But Iraq has repeatedly denied that this is happening as part of “Iraqi government policy,” according to Iraqi Foreign Minister Hoshyar Zebari.

In central Baghdad’s Liberation Square, posters eulogizing those who died “while defending the Sayyeda Zeinab Shrine [in Damascus]” have become a common sight. Those posters have been part of the scene for more than a year. The faces and names change, but the posters are always there. Iraqi officials have no choice but to look at these posters when they pass through that area to get from Republic Bridge to the heavily fortified Green Zone. It seems that the politicians have gotten used to those faces on the posters and now ignore them. Despite the annoyance of Western countries, including Britain, the Iraqi government has taken no serious measures to prevent fighters from going to Syria.

Asaib Ahl al-Haq, a militia that broke away from the Mahdi Army in 2004 and is now led by young cleric Qais al-Khazali, has claimed that it is the one responsible for putting up those posters.

According to talk in Iraqi decision-making corridors, Maliki is supporting Asaib Ahl al-Haq directly to weaken the Sadrist movement, which is a stumbling block for him to win a third term in office.

Al-Monitor spoke with a former leading figure in the Mahdi Army, who now is responsible for sending young men from Iraq and Iran who are willing to fight in Syria. Speaking on condition of anonymity, he said, “Prominent political parties support the fighters in Syria. … Asaib Ahl al-Haq is not alone in fighting in Syria. There are fighters from the Badr Organization and supporters of marja [religious reference] Mahmoud al-Hussni al-Sarkhi. There are 14 Shiite factions fighting in Syria. Some of them broke away from the Abu al-Fadl al-Abbas Brigades,” which for months has been the most prominent Shiite faction fighting in the area and surrounding the Sayyeda Zeinab Shrine in Damascus. That brigade consists of Iraqis, Lebanese and Syrians.

The source pointed out, “The two brigades that make up the bulk of Iraqis in Syria are the Abu al-Fadl al-Abbas Brigades, whose leadership is stationed in Damascus, and the Haidar al-Karar Brigades, led by Akram al-Kaabi, the military leader of Asaib Ahl al-Haq in Iraq and who is stationed in Aleppo after his brigade liberated Aleppo [International] Airport. … The Haidar al-Karar Brigades defected from the Abu al-Fadl al-Abbas Brigades after a disagreement on the legitimacy of fighting away from the Sayyeda Zeinab Shrine.”

The source transports fighters to Iran, where they receive weapons training in Iranian training centers. The fighters are then transported to Lebanon and on to Syria with Hezbollah’s help.

Transportation from Iraq to Iran and then to Lebanon is easy. But the difficulty is with Hezbollah transferring them to Damascus.

Mazhar al-Janabi, a member of the Security and Defense Committee in the Iraqi parliament, denied that his committee discussed the issue of Iraqis fighting in Syria.

He told Al-Monitor, “Iraqis should defend the holy shrines in Iraq instead of going to Syria. … These are mere parasites who meddle [in the affairs of] neighboring countries. They have no Iraqi honor.”

How fighters are being transported is no longer a secret. Shiite radicals now have Facebook pages that explain how to get to Syria, the duration of the stay there and the requirements that fighters must have to go to “jihad.”

Youths claiming affiliation with the Badr Organization — which is led by Hadi al-Aamiri, the transport minister in the Iraqi government — created a Facebook page by the name of Badr, the military wing.

On that page, they show pictures of Shiites who died in Syria in addition to images of their funeral processions in Iraqi cities.

Every week, Baghdad receives the bodies of those killed by snipers in Syria. But it is difficult to take pictures of wake gatherings for those killed, because their parents and militia leaders prevent the taking of photographs. Punishment is severe if one tries to film a wake gathering, according to what the former Mahdi Army leader said.

After the tombstone of Bin Udai — one of the Prophet Muhammad’s followers — was desecrated in May, social media pages were created to defend religious shrines in Syria. That event stirred young Shiites and spurred them to call for jihad to protect those shrines from “Wahabis.” An example of that is the “Campaign for the Defense of the Sayyeda Zeinab Shrine” and the page of “Abu al-Fadl al-Abbas Brigades.” It seems that these pages are not being monitored by the Iraqi government or security forces in Baghdad.

Ali al-Shallah, a member of the Committee of Culture and Information in the Iraqi parliament, said that his committee “deals cautiously with electronic media, so that our reports or statements are not seen as cracking down on freedoms.”

He told Al-Monitor, “The Committee of Culture and Information sends letters to those who created those Facebook pages that call for jihad, to express our point of view that these calls threaten national security and freedom of expression in Iraq. But we don’t say this in a declaration or an official statement for fear that it would be seen as a crackdown on freedom of opinion and the media.”

On the other hand, it is very unclear how Sunni fighters who have been fighting alongside Salafist organizations against the Assad regime are being transported. No information is available on their numbers or of their importance in Syria’s battlefields. But there are signs every now and then that Abu Bakr al-Baghdadi — who was born in Samarra, Iraq, and now leads the Islamic State of Iraq and al-Sham (ISIS) — is luring young Iraqis from rural and border areas to Syria by tempting them with female “sex jihadists.”

Bassem Dabbagh, a Syrian writer and political analyst, told Al-Monitor in a phone interview, “Most Sunni Iraqi fighters in Syria are fighting with either Jabhat al-Nusra or ISIS. But the bulk of their presence is within the 'battalions of immigrants,' which consist of non-Syrians who only fight and plan for battles.”

Omar al-Jaffal is an Iraqi writer and poet. He is an editor of Bayt and Nathr, two intellectual magazines that are published in Iraq. He is also the chief editor of Al-Aalam al-Jadid, an electronic newspaper.