Muqtada al-Sadr’s calls to restore the "Shiite Home" were viewed as an attempt to revive the electoral Shiite alliance that cracked during recent legislative elections. 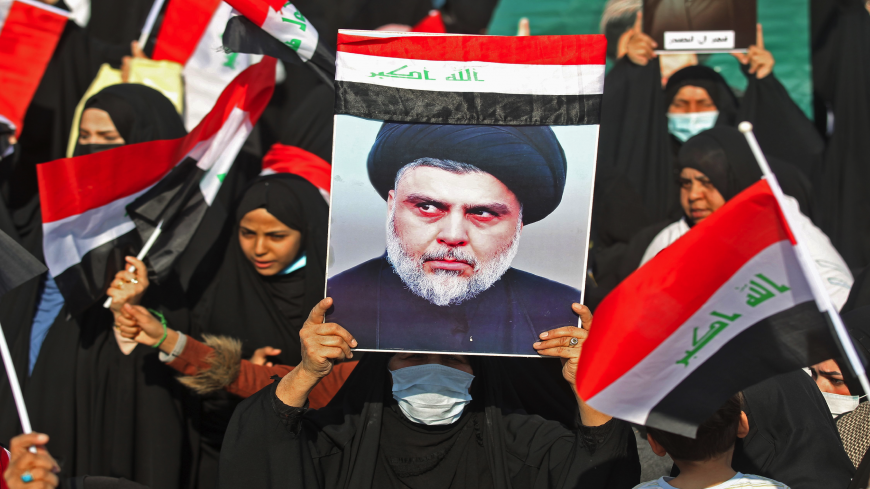 Supporters of iraq's Shiite cleric Moqtada al-Sadr (portrait) demonstrate in Tahrir Square in Baghdad on November 27, 2020. - Tens of thousands of supporters of the Shiite cleric Moqtada al-Sadr gathered in the Iraqi capital in a show of political power, as the legislative elections are scheduled for next June. - AHMAD AL-RUBAYE/AFP via Getty Images

BAGHDAD — Iraq's Sadrist movement leader Muqtada al-Sadr sparked wide controversy after posting a tweet Dec. 2 in which he called for the restoration of the "Shiite Home" — a call many believe carries political or electoral motives to revive the electoral Shiite alliance.

“I believe it is of pressing interest to expedite the restoration of the Shiite Home through extensive meetings to write an ideological and political honor pact," Sadr’s tweet read.

His tweet raised the ire of national parties in the country that believe it constitutes a return to square one and an entrenchment of the sectarian situation that has marked the political arena since 2003 — with the presence of a Shiite Home, a Sunni front and a Kurdish alliance.

Sairoon Alliance parliament member Riyad al-Massoudi said that “the media outlets misinterpreted Sadr’s tweet about restoring the Shiite Home." He told Al-Monitor, “Restoring the Shiite Home means revisiting mistakes made by joint Shiite parties in the rule and putting [together] an ideological honor pact to face the challenges from opposing or radical groups.” He noted that “although the Shiite political parties welcomed Sadr’s call, they will not take practical steps to discuss them, out of fear that Sadr would lead the campaign or the dialogues and influence the coming elections.”

The State of Law Coalition, led by former Prime Minister Nouri al-Maliki, welcomed the proposition to restore the Shiite Home and make a political pact resembling the Iraqi National Alliance, which included all Shiite blocs and participated in the first elections in the country in 2005.

State of Law Coalition member Mohammed al-Sayhoud told Al-Monitor that “the political situation in the country, the challenges and the changes necessitate coordination of stances between Shiite blocs and parties, especially since they will take part in the elections in the central and southern areas and in the same electoral constituencies.”

“The political honor pact between Shiite blocs does not necessarily mean an electoral alliance, but it might consist of a plan or political work rules to organize the electoral competition and arrange the post-election phase by agreeing on a form and path of formation of the government to avoid previous mistakes of past elections,” he said.

Asaib Ahl al-Haq parliament member Naim al-Aboudi tweeted, “We believe the call that Sadr recently published is very important because it does not stem from a sectarian angle but seeks to achieve inclusive national interest. The strength and unity of the Shiite Home reflects positively on Iraq’s strength and unity. Therefore, this opportunity must be seized and not wasted under any consideration.”

But the remaining Shiite parties had their reservations on the project to revive the Shiite Home — or they simply refrained from commenting on Sadr’s proposition. Al-Nasr Alliance, led by former Prime Minister Haider al-Abadi, suggested resorting to a national honor pact instead of reviving the traditional Shiite conglomerate. The alliance said in a statement, “Based on Sadr’s call, and in line with the demands for reform and change voiced during the October Revolution, and to ensure the principle of integration between parties, figures, and political and social groups, we call for launching a systematic movement to adopt an honor pact as a national principles’ framework that binds all Iraqi figures and forces.”

Perhaps not all influential Shiite parties responded to the idea of restoring the coalition/Shiite Home — despite their desire to keep sectarian blocs and alliances — because they believed Sadr’s steps fell into his plans to take over the premiership in the next phase, which he clearly declared on Nov. 22.

“If the elections result in a Sadrist majority in parliament and Sadrists will get the premiership, I can, with their help and as we had vowed, continue the reform project from within and run in the elections,” Sadr had declared. He is trying to capitalize on the previous electoral experience where he did not achieve the comfortable majority (54 seats), while he allied with some representatives of the civil movement, the Sairoon Alliance. The biggest bloc that was constitutionally tasked with the premiership remained stuck between him and the Fatah Alliance, which includes representatives from the armed Shiite factions led by Hadi al-Amiri in 2018.

Sadr may have found that the path of his political current to the premiership will only be through the Shiite alliance (sectarian), and his leadership of this alliance by warming up to traditional Shiite blocs. When he found the popular reaction unwelcoming, he changed his rhetoric and stated that his call was for “ideological reform” rather than a political call.

Still, Sadr’s new approach toward the "Communist Party" and the civil current also reflected the extent of disagreement and political and public damage that each side caused the other. According to former parliament member of the civil movement Sharq Al-Abayji, the civil movement stated that its experience with the Sadrist movement damaged their relationship. “The alliance with the [Sadrist] movement was not right at the time, because it came during the period of the rise of the civil current and popular desire for change and a civil state. The alliance stymied this public enthusiasm for a civil state,” Abayji said.