Has Sadr lost the Iraqi street?

Iraqi populist cleric Muqtada al-Sadr, after playing to the hopes and grievances of everyday Iraqis, may be losing some of his following as he plays for advantage among Iraq's political factions. 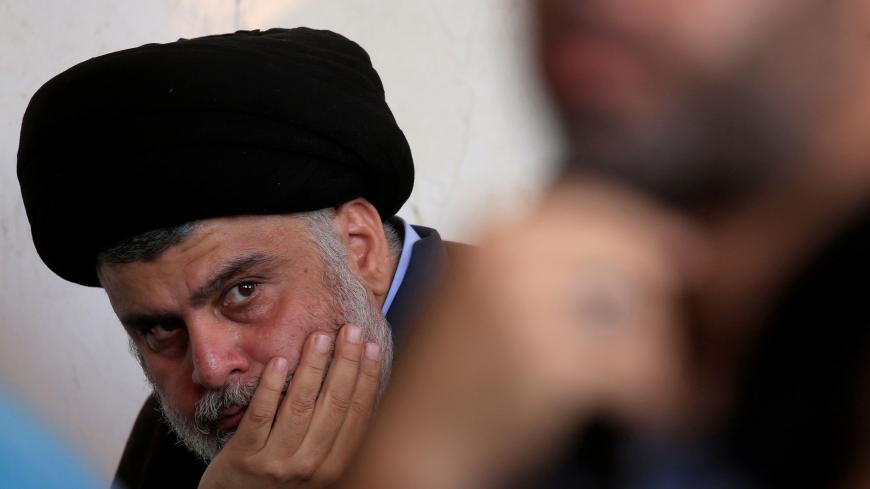 BAGHDAD —  Shiite leader Muqtada al-Sadr’s sudden change of heart regarding the popular protests right before the appointment of Mohammed Tawfiq Allawi as prime minister has caused his longtime alliance with the largely secular civil current to face a moment of truth. The mutual interests of the two sides appear to have hit a wall, with the protest movement demanding more radical change than the man once referred to as a "radical cleric" is willing to bear.

Sadr ordered his followers to withdraw from the protest squares Jan. 25 after demonstrators in Tahrir Square did not participate in a demonstration he called for that demanded the withdrawal of US troops from the country.

However, he later ordered his followers to return to the squares. This was before Allawi was named prime minister-designate Feb. 1, and their return was coupled with violent activity on the part of his Blue Hat units. These units were formed by Sadr to help security forces open roads and “return the revolution to its peacefulness by expelling intruders,” as Sadr put it. This caused violent confrontations with the demonstrators and led to the killing of dozens.

Sadr’s recent moves have raised several questions and sparked a panoply of discussions in the media and on social media platforms, leading many in what is known as the civil current to change their opinions about him. For many in the civil current, Sadr was the most tolerated Islamic leader and an ally capable of bringing about political change. However, after Sadr's rapprochement with the blocs and parties close to Iran and his support for the appointment of Allawi, more and more civil current leaders started questioning the future of the alliance between the current and Sadr.

Even the most prominent civil ally of Sadr, the Iraqi Communist Party, has now announced that its orientation has become “distant” from that of the Sadrist movement.

Ali Mahdi, a member of the party's political bureau, told Al-Monitor this is especially true with regard to dealing with the protest movement and the relationship with the Allawi government that is being formed.

“The alliance with Sadr was forged for the sake of the elections only, and the alliance was with the party he founded in 2018, which is the Integrity Party in the Sairoon Alliance, and we were able to obtain a good number of parliamentary seats,” Mahdi said.

“But after the Communist Party members of parliament resigned in October 2019 in protest against the brutal suppression of Iraqi demonstrations, the Sairoon Alliance practically died, as the parliamentary connection with the Sadrist movement came to an end and contacts stopped between the two sides,” Mahdi added.

Asked about the reasons behind the disconnect in the protest squares, Mahdi said, “Sadr's priorities now differ from those of the Communist Party. While the former is focusing on the withdrawal of the US forces and believes that supporting the nomination of Allawi is necessary to achieve this goal, one of our most important goals has been to implement the program that we agreed on with Sadr, which is to establish a civil state and limiting the right to bear arms to the state.”

He said, “Allawi’s candidacy is contrary to the conditions set by the protest squares, and we will strive to achieve the demands of the people.”

In 2017, the Communist Party joined forces with Sairoon, which in turn caused the party's split from the Civil Democratic Alliance.

To comprehend the strange connection that has existed between secular civil organizations, including the Communist Party, and the Sadrist movement — a nationalist, Islamist grouping that believes in the need for religion in politics — one needs to first understand the weakness of secular parties in Iraq and their failure to participate in the governments that followed the overthrow of the Saddam Hussein regime in 2003.

These parties needed a protector or guarantor to participate in political life, and they found this in the Sadrist movement.

He told Al-Monitor over the phone, “The Sadrist movement has been granted several chances to be part of the political reform and change movement but it has repeatedly failed to grab these chances.” Khashan added, “Because of the [Sadrist] movement’s continuous work to only serve its interests and political goals, we, as a civil current, cannot continue with it, because our goals are fixed and will not change, as we work for the interests of the people.”

He said, “The separation between the civil and Sadrist currents is irreversible, as the truth has been exposed.”

Khashan said that Sadr was late to join the protests that started on Oct. 1 and that Sadr asked his supporters to withdraw from the squares before "the goals of the revolution were achieved. The upcoming elections will prove the true size of each party if conducted with integrity.”

Amid an ongoing crisis to define the concept of what constitutes the civil current in Iraq, which is used by non-Islamic parties as a reason to confront “political Islam” while avoiding disclosing their liberal or secular identities, some civil entities are now trying to distinguish between themselves and the Communist Party.

Zulfiqar Hussein, a leader in the civil current, told Al-Monitor that by turning his back on protesters, Sadr proved that he is not an ally of the civil movement, but an ally of the Communist Party alone for electoral reasons.

He said, “The fact that Sadr declared his proximity to the civil current and that some civil figures support Sadr’s directions does not mean that there is an alliance between the two currents.”

Hussein added, “The October Revolution proved that the civil current is larger and stronger than the Sadrist movement, especially after Sadr proved to be biased to the authorities and stood against the protests. Should Prime Minister-designate Allawi manage to form a government, clashes will continue in the street and Sadr's popularity will decline at the national level.”

The next few weeks may put to the test the ability of civil currents to confront a government that Sadr may fully support. This time period may also test Sadr's willingness to sacrifice a large part of his popularity in exchange for government decisions that might include the removal of US forces from the country and implementation of the economic agreement with China, among other decisions.

In any case, the inevitable result of this separation between Sadr and civilians would be the birth of a new conflict (that is added to the large number of chronic conflicts in Iraq) between those who believe that the Sadrist movement is still a “centrist current” opposing Iranian influence, and those who believe that the 45-year-old Shiite leader has shifted to the other side and turned his back on yesterday’s allies.