Sadr Allies With Sunnis in Challenge To Maliki

Muqtada Sadr has allied with Sunnis opposed to Prime Minister Maliki in order to help oust him from power, writes Mushreq Abbas. 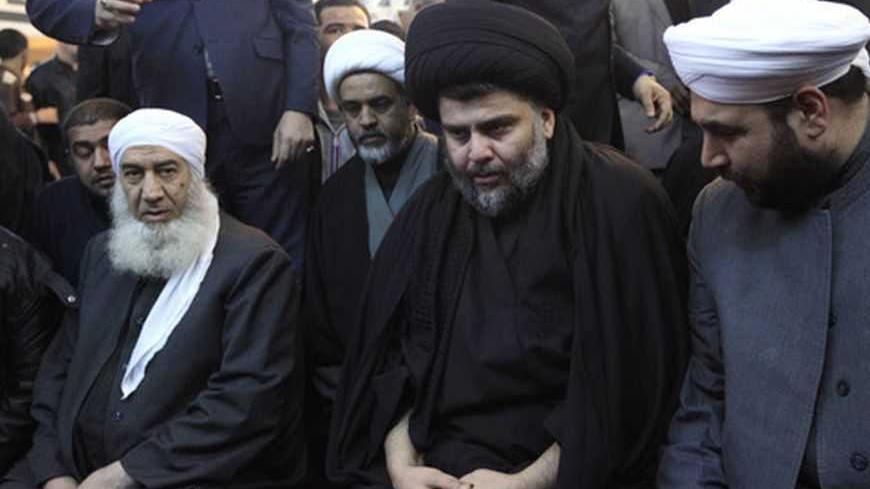 Iraqi Shiite cleric Moqtada al-Sadr (C) takes part in Friday prayers participated in by Sunni and Shiite Muslim worshippers in a gesture of unity at the Abdul Qadir Gilani Mosque in Baghdad on Jan. 4, 2013. - REUTERS/Thaier Al-Sudani

No one in Iraq had ever imagined that a popular and political alliance would one day bring together Muqtada al-Sadr and the Sunni Arabs. The two parties participated in an excruciating civil war (2006-2008) that resulted in thousands of casualties on both sides.

Sunni Arabs have always viewed Sadr as the commander of an armed militia. However, they are now strongly calling on him to join them in their protests against Prime Minister Nouri al-Maliki.

Sadr, in turn, has always viewed the Sunnis as terrorists that threaten the Shiites. However, he supported them in the media, lashed out at his Shiite ally and is currently preparing to launch protests in Shiite cities to oust Maliki.

The Anbar demonstrations (in west Baghdad), which were launched more than 10 days ago, began to reveal a troubled relationship between the two parties. In fact, a senior tribal leader told a group of Sadr's aids, "If Sadr does not join, there will be voices calling once again for secession (the Sunni secession or the formation of independent provinces), and we will not be able to mute these voices this time.”

Prime Minister Maliki faced major political confrontations with Sunni political representatives in the months that followed the US withdrawal from Iraq. In fact, one of their senior commanders accused Tariq al-Hashemi of being involved in acts of violence. During the same period, Maliki fought an open conflict with the Kurds over power in the disputed areas in northern Iraq, as well as an equally important struggle with his Shiite allies (in southern Iraq) to prove that he is the most representative of this community and that he deserves a third term, which was strongly rejected by Sadr.

With the failure of efforts aimed at dismissing Maliki through a former political alliance between Kurdistan regional leader Massoud Barzani, Sunni-backed Iraqiya List leader Iyad Allawi and Sadr, the demonstrations that recently started in Anbar reshuffled the cards through an alliance that is in the offing between Sadr and influential Sunni clerics led by Sheikh Abdul-Malik al-Saadi.

A couple of hours were enough for the septuagenarian Sheikh Saadi to completely change the tone of the Anbar demonstrations. He returned on a wheelchair from his residence in Amman, Jordan, and directly headed to the square of demonstrations. He changed the gathering from a rally of Saddam Hussein's fans — who held up photos of the dictator and flags from his reign — into a demonstration characterized by Shiite slogans. Participants raised post-American occupation flags and adopted realistic goals, which did not mention the restoration of the previous rule and criticized terrorism.

Over the past two days, Sadr and Saadi made phone calls and had their delegations hold talks in preparation for a direct meeting between the two in order for Shiite cities to begin demonstrations against Maliki, if not to oust him. Based on Sadr’s demands, these demonstrations will force him to give up on running for a third term in the 2014 elections.

Ironically enough, when Maliki launched a war on Sadr's militia in 2008 and 2009, the Sunnis described him as a "national hero." Maliki remained a hero to them until the 2010 elections, when he failed to win the Sunni votes in the elections as he had expected, and then fought a year-long struggle with their political representatives to win a second term.

Today, the Sunnis share just as many differences as they do common goals with Sadr. The two parties have detainees in prison and they both hope that they will be released by a general amnesty. They both believe that Maliki monopolizes power in a bid to serve the interests of his party and his close associates. Moreover, they both have a close relationship with Turkey, a strategic ally of Barzani.

However, there are major differences between the two parties, including deep ideological differences in doctrine and in their interpretations of religious history. These differences also include the fact that Sadr presents himself as a political cleric, or as his supporters put it: a "leader" who combines religious authority with political power, just like the Iranian regime that the Sunnis oppose.

But when Sadr went to Iran after 2008 to study, his personality significantly changed. His close associates say that this resulted from his experience with the mistakes of Iran's ruling theory. In fact, when he returned to Iraq he adopted a different viewpoint regarding the relationship between the Shiite majority and the Sunni minority and described it as a "tolerant relationship," rather than a "hostile" one. Moreover, he started saying that "Maliki's entire policy is offensive to the Shiites because it portrays them as a tyrannical majority in the eyes of the Kurds and the Sunnis." Sadr concluded a press conference by saying that "Iraq is not only composed of Shiites, but of Sunnis, Kurds, Turkmen, Christians, Mandaeans and Jews as well.”

The Sunnis got that message, embraced it and translated it into demonstrations. Thus, they turned the former militia leader into a new Shiite hero who perceives them as partners, not followers.